K N Bhat
The writer is a senior advocate of the Supreme Court and former additional solicitor-general of India. He can be reached at knbhat1@gmail.com

Framing rules for the guidance of the ‘Masters of the Roster’ will avoid any comparable controversy in future. 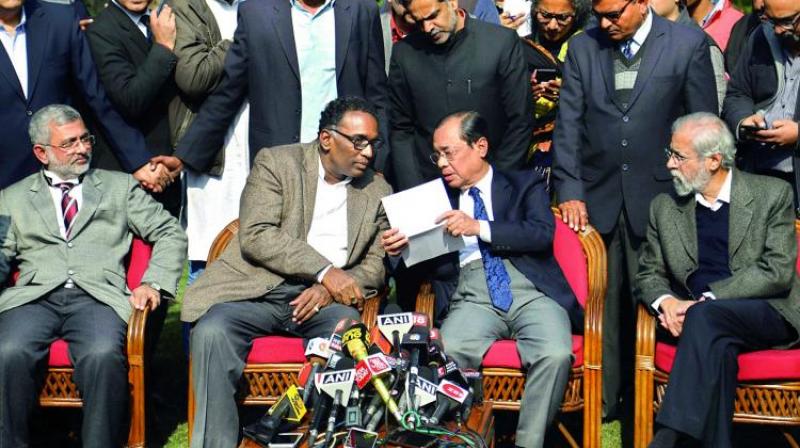 The January 12 press conference by four senior Supreme Court judges was not a revolt or mutiny, as dubbed by the media, it was really a reaction expressed in a manner that was different. Their grievance was that in the Supreme Court’s working there had been of late some glaring flaws that would endanger the credibility and reputation of the court; the instances cited related to the listing of cases. The clear allegation was that sensitive matters were being listed before chosen benches instead of following any established pattern. The target of attack was the Chief Justice of India, who is unquestionably the ultimate authority to list the cases — he is the Master of the Roster. “But can he be despotic?” was the question that was raised.

After waiting for a response to a two-month-old letter that they had written to the Chief Justice highlighting the imperfections, on the morning of January 12, the four judges reportedly met the CJI and pointed out that a sensitive PIL was listed before a seemingly handpicked bench, thus slighting their complaint.

The CJI reportedly refused to rectify matters. Left with no option, therefore, the four judges “performed their painful duty to the nation” by publicly airing their grievances through a press conference, lest “posterity should accuse them of having sold their souls”.

As expected, a spate of television debates, discussions and dissections followed. Opinions ranging from the sublime to the ridiculous were freely traded — leaving only the respective authors supremely satisfied about their own novel solutions to remedy the unprecedented situation.

To a question: “What next?” Justice J. Chelameswar said at the press conference: “We will all attend the court on Monday and work as usual.” In fact, they were working as usual on Monday. The following day, at the initiative of the Chief Justice, the four judges and the CJI talked over tea.

Is it back to normal? May be not yet, but surely the way to normality appears to be open. Normality among judges does not mean schoolchildren-like comradeship. The world over, judges seem to enjoy nursing differences amongst themselves.

The incident of January 12, however, has raised many questions that may recur. One of them was about the propriety of sitting judges addressing a press conference to air in-house problems. The majority of the proclaimed standard-bearers of the legal fraternity who were on TV shows had no doubt that the four were guilty of gross impropriety — deserving impeachment, according to a few. Many others were of the view that there is no such total prohibition against judges mouthing their grievances in public, particularly when there is a threat to the very foundation of the institution, as in public confidence. Can judges who are aware of the impending danger keep their knowledge away from the public — that too when there is no prescribed forum to approach?

The question of whether the grievances listed by the four in their letter to the CJI do point to a grave and imminent danger to the judiciary, or not, was not addressed by the TV anchors or pundits. They appear to be serious enough.

Nor was any attempt  made to trace the pedigree of the so-called prohibition against judges meeting the press. The moralists’ “ipse dixits” may not carry far enough.

The oft-referred authority in this regard is Lord Kilmuir’s Rules of 1955 against sitting judges publicly sharing their views — except through judgments — have been rejected many times, even in England. A recent “UK Human Rights Blog” under the head, “Can Their Lordships Open Their Mouth Extra-Judicially?” records: “The rationale of the Kilmuir Rules was to protect judicial independence, one of the cardinal principles of our constitutional system. Yet one might justifiably take the view that judicial independence is not the same as judicial aloofness, and thus the Kilmuir Rules were abandoned by Lord Mackay LC in 1987, ironically on the basis that such rules were inconsistent with judicial independence. The view from the Woolsack (UK’s Lord Chancellor, who presides over the House of Lords) at that time was that judges needed to be able to decide for themselves when it was appropriate to speak out.”

And the Master of the Rolls (Lord Neuberger-2012) in this context himself pointed out: “Times have changed”!

In most common law countries like the United States, Britain and Australia, judges at their conferences adopt codes of conduct for their fraternity. In India, there appears to be no such formal code, except for decisions at meetings of chief justices. However, none of them, including rules adopted by the United Nations, prohibits judges from meeting or talking to the press.

The solutions that have been suggested may be examined before their rejection. For example, the advice to approach the President of India would have exposed the learned judges to ridicule if the President had asked them about which provision of the law gave him any power to deal with the situation.

Another suggestion was to hold a “full court” meeting to make the needed course correction. But who would call such a meeting? If these four approached other judges individually to participate in such a meeting to find ways of belling the cat, they would be guilty of trade unionism — a course rightly avoided by the four judges.

Fortunately, during the days that followed, the CJI did not succumb to the pressure to address any retaliatory press conference. He has preserved his position as the first among equals. Since the substance of the differences is not insurmountable, through a meeting of the full court an acceptable solution can be worked out. Framing rules for the guidance of the “Masters of the Roster” will avoid any comparable controversy in future.

The courts must not only be impartial and unbiased, but must also appear to be so.