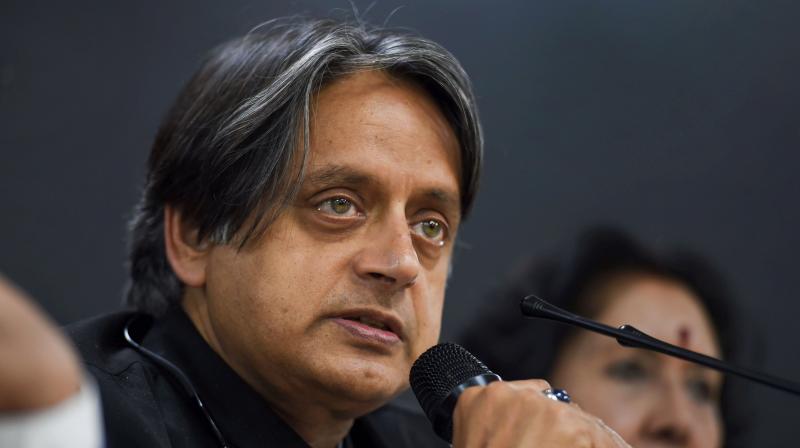 Though considered an underdog, Lok Sabha MP Shashi Tharoor ran an enthusiastic campaign which came in for a lot of praise as he reached out not just to party delegates but also to the public at large, especially the youth. — PTI

The run-up to the October 17 election of the next Congress president turned out to be quite a lively affair. Though considered an underdog, Lok Sabha MP Shashi Tharoor ran an enthusiastic campaign which came in for a lot of praise as he reached out not just to party delegates but also to the public at large, especially the youth.

Predictably this did not go down with the “official camp” in the party, especially since there was talk that Mr Tharoor would make an excellent prime ministerial candidate. According to Congress insiders, feelers were sent to Mr Tharoor’s team members that they should go slow on their campaign while others were asked to come on board to support veteran leader Mallikarjun Kharge’s candidature if they wanted a good future in the Congress. The Kerala MP’s campaign was managed by several young party members, including Karti Chidambaram and Salman Soz. The Kharge camp was particularly upset as the senior leader, considered the “unofficial” official candidate for the party presidency, was not getting the same traction on social media as Mr Tharoor. A Kharge campaigner is even said to have called Tharoor camp members to get tips on a hashtag for the veteran leader. Mr Kharge’s social media presence might have lagged behind Mr Tharoor’s but he made up for it with a slew of media interviews in the closing days of the campaign.

The cash-rich Board of Control for Cricket in India (BCCI) has always been dominated by political players, irrespective of the government in power. But unlike the past when leaders from across the political spectrum like Sharad Pawar, Arun Jaitley and Jyotiraditya Scindia worked together harmoniously, the current Bharatiya Janata Party dispensation, especially home minister Amit Shah who micro-managed the BCCI poll process, believes in keeping it all in the family.

While all new BCCI office bearers have strong BJP links, it was surprising that Congress MP Rajeev Shukla managed to retain his place in the cricketing body as vice-president. Though it is known that Mr Shukla makes a conscious effort to cultivate leaders of all political hues, the question doing the rounds these days is: what’s the quid pro quo here. As the Congress in charge of poll-bound Himachal Pradesh, Mr Shukla has come in for sharp criticism from the party’s state unit which is convinced that his BCCI connections are getting precedence over the party’s interests. According to Congress state leaders Mr Shukla is covertly helping the BJP in Himachal Pradesh given his old ties with former BCCI office bearer and friend Union sports minister Anurag Thakur.

Still on the subject of the BCCI’s new team and the unceremonious exit of former cricket captain Sourav Ganguly as the cricketing body’s president. The BCCI developments took place only a few days ago but speculation is already rife about Ganguly’s future plans and whether these include joining the Trinamul Congress.

West Bengal chief minister and Trinamul Congress chief Mamata Banerjee had publicly charged that Ganguly was shown the door because he did not respond positively to the BJP’s offer to join the party. It would be a major victory for Ms Banerjee if she can persuade the former cricketing hero to join her party. Besides the fact that the Trinamul Congress would acquire a popular figure, Ms Banerjee would score big over Union home minister Amit Shah who failed to enlist Ganguly’s services for the BJP.

It appears the response to Congress leader Rahul Gandhi’s Bharat Jodo yatra in Karnataka has got the party’s political opponents in the state to rethink their plans for next year’s assembly polls. There is a buzz that the ruling Bharatiya Janata Party and the Janata Dal (S) are exploring the possibility of an electoral understanding or a formal alliance. This means the two parties will not field strong candidates against each other in their respective strongholds. Though no final decision has been taken on this, the two parties are believed to be veering around to the view that such an understanding will benefit them both.

The BJP-led government is on the back foot as it is beset with controversies, the latest being the corruption charges levelled against it. On its part, the JD(S) could do with a helping hand as it faces an existential crisis due to its inability to hold on to its social base. As it happens JD (S) leader H.D. Kumaraswamy has been warming up to the BJP for some time now.

While Rahul Gandhi is grabbing headlines and eyeballs with his Bharat Jodo Yatra, his sister and Congress general secretary Priyanka Gandhi Vadra has kept away from the yatra. In fact, she was keeping a low profile for some time now and was barely seen or heard till the launch of the party’s poll campaign in Himachal Pradesh last Friday. There are two explanations being proffered by Congress insiders in this connection. One is that Priyanka does not wish to steal Rahul Gandhi’s thunder on the yatra. The other is that Rahul Gandhi vetoed suggestions following the Ashok Gehlot fiasco that Priyanka be fielded for the Congress president’s post. He insisted that no member of the Gandhi family would enter the electoral fray.