Americans are out to make Pakistan look bad

Why the hell did the Americans not do something when the family was on Afghan soil is the question being asked. 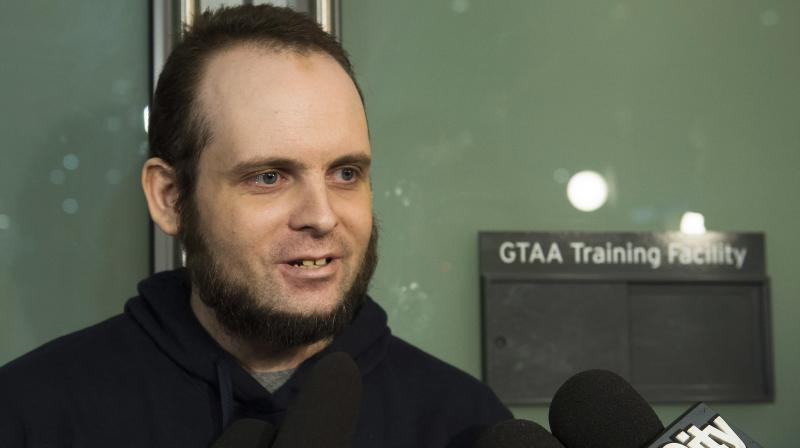 Joshua Boyle speaks to the media after arriving at the Pearson International Airport in Toronto. (Photo: AP)

Something old, something new and something definitely blue — much happened this week. You can decide which is which. But what does it all mean?

Let’s start with this hostage business. It’s right out of the crisis playbook: find something you can offer the other side so that both sides can come out looking good and saying nice things about each other.

Good for the young family freed though. If there’s anything everyone can agree on it’s that the family was being held against its will and there are few things as hellish as that captivity. But the episode is revealing in other ways.

One, the trust deficit is enormous and perhaps even unbridgeable. A young family rescued is the kind of thing the media and officialdom find irresistible, but it doesn’t move the needle much in terms of the overall relationship.

If anything, that this was the gesture chosen or agreed on suggests how far apart the two sides still are; in years past, they’d have droned a big-time militant or two.

Two, the story has privately irritated the boys here. Whether the family crossed over recently or had long been here, a recovery on Pakistani soil is proof of exactly what we’ve been denying: sanctuaries on this side of the border.

Why the hell did the Americans not do something when the family was on Afghan soil is the question being asked. Behind the positive public spin lie darker private mutterings: they — the Americans — are out to make us look bad any way they can.

Three, the Haqqani angle. That it lives on — the US obsession with the Haqqanis, that is — is a danger sign. It is an American military obsession, one not widely shared by its diplomats.

The theory is that the Haqqanis’ links to Al Qaeda, the military casualties the Haqqanis have inflicted, a need for a military scapegoat or some combination of the three has created an American military obsession with the Haqqanis.

That the gesture chosen involved the Haqqanis does not bode well — it suggests a continuing American obsession that the Pakistani side is unwilling or unable to accommodate in meaningful ways. On to a dangerous clown of a different kind — the son-in-law, Safdar.

It was simultaneously an offensive and defensive move, and its repercussions could be severe. First, the offensive dimension: against the boys.

For all the dabbling in mainstreaming and surreptitious support and the like, there is a red line: don’t meddle with the institution itself, and sure as hell not if you’re an outsider.

While that’s always been the case, the counter-insurgency and counter-terrorism campaigns have infused a new urgency.

When both sides in a battle shout the same slogans and you need to convince your side that they are on the right side of the war, you don’t want anything to undermine cohesion and purpose.

Safdar’s tirade is deeply uncomfortable because it threatened a religious debate in the very institution where total unity and commitment to the fight against militancy is needed.

And whether it was a mindless tirade or a cynical one, it was made all the worse by familial ties. But there is a defensive dimension too. NA-120 and the oath controversy in the electoral amendments have combined to present a formula to prise away the N-League’s right-wing support.

With the Sharifs at war with institutions and the PTI having far from faded, the N-League already knew the next election would be an almighty struggle. Then a vulnerability on the party’s right flank emerged.

Outside polite company, in the trenches of constituency warfare, the rank and file and candidates work with hard reality. If religious poison is being used against you, then you spray some of your own around to try and insulate yourself.

The party leadership also understands that. So even if some were alarmed by the tirade and its offensive dimension, they know the speech may have saved the party some votes. Politics is seldom less than ugly.

The bit about the tax base is a nice little example. The boys feel they are on firm ground there because their vast commercial empire pays a tremendous — tens of billions of rupees a year! — amount of tax. Since they’re on firm ground, their criticism must be heeded as legitimate.

Except the vast majority of the billions collected are sales or indirect taxes — tax that is paid by the consumer and merely deposited in the national kitty on the consumer’s behalf by the producer.

If pressed, there is a response: well, at least we’re passing it on. The implication being that other sectors routinely don’t. So the boys are still in a position to give economic advice.

But that still doesn’t change the depressing implications of the overall rudimentary economic understanding: if they take over, what they think is good policy will become policy.

There is also the old ploy: public commentary as a helpful nudge. With the active service wholly dependent on state funding, a crisis of state finances is a potential squeeze on military outlay.

Since that is unacceptable, a nudge or two is sometimes needed. The civilians are more than happy to write a cheque or two if it’ll make the problem go away. After all, it’s not like it’s either of their money. Something old, something new and something blue. You decide which is which.