Aakar Patel | Modi and his bhakts, and the reality of today’s India

Meanwhile, as if oblivious to the reality of the decline of India, Modi continues with his political games 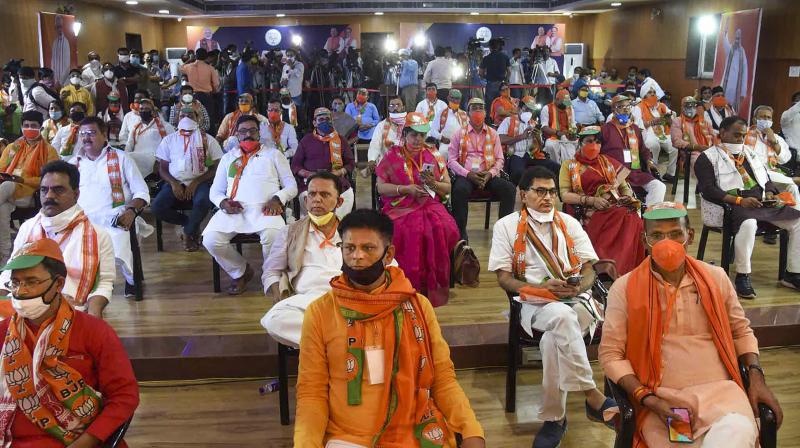 Unemployment at the beginning of the year was at eight per cent, the highest in India’s history. This was before the lockdown. Today it is around 20 per cent. PTI Photo

“Bhakt” means devotee, someone wildly enthusiastic about someone or something. Hindi defines it as “anuragi”, someone offering unconditional and eternal love. The word “bhakt” is used to define the followers of Prime Minister Narendra Modi.

They consider him a messianic figure, who will produce the change that India needs. In this manner of thinking, the Indian nation is being held back by other people (corrupt and incompetent politicians) and Narendra Modi is so different from them that he will reverse this and make India great again.

I said “manner of thinking”, but it is not clear if this bhakti is thinking. Devotion is not a product of the intellect but that of passion. It is religious, and like in religion the bhakt here is also not concerned with the material world, and what happens in reality. The question is whether it is accurate to classify Modi’s supporters as bhakts. We must look at it objectively.

The first item on the agenda of the Gujarat Model was supposed to be the economy. India’s economy will contract this year, meaning gross domestic product in 2020-2021 will be less than it was last year. This is something which has not happened in four decades. The contraction comes at the back of the consistent slowing of the economy each quarter for the last nine quarters. That has not happened anytime since 1947. This was before the lockdown.

Ratings agency Moody’s has downgraded India back to where it was in 2003. This will affect our creditworthiness and the cost at which India can raise money. It is not just a mark on a report card. We will all pay for this. The chief economic adviser to the government says he does not know “whether the recovery will happen in the second half of the year or in the next year”.

Unemployment at the beginning of the year was at eight per cent, the highest in India’s history. This was before the lockdown. Today it is around 20 per cent.

On Saturday, June 13, the Economist carried the headline: “India’s lockdown has failed to stop the virus, but it has succeeded in halting the economy.” The Economist is so close to Modi that it had reported in 2013 that he would contest in 2014 from Uttar Pradesh. I wrote then that it was wrong, and that Modi would contest only from Gujarat, but it was I who was wrong.

The second item on the agenda was nationalism. London’s Telegraph revealed on Thursday what everyone in India knows but cannot be discussed -- that China has captured 60 sq km of Ladakh.

On Friday, the French news agency AFP reported an unnamed senior Indian military officer stationed in the region as saying: “The Chinese are refusing to move back from their newly captured positions, both in Pangong and Galwan Valley. They are consolidating the new status quo.”

I woke up on Saturday to the headline: “4 terrorists killed in Kulgam and Anantnag, encounter underway”. This was the fourth time in the week that such a thing had happened. The long decline in fatalities in Kashmir starting in 2002 and bottoming out in 2014 has been reversed and violence is again on the way up. Meanwhile, not a single Kashmiri Pandit has returned to the Valley.

Having announced that India would fight under his leadership a Mahabharat against the coronavirus that would last three weeks, Prime Minister Modi has gone silent on what the next phase of the battle would be. The lockdown is gone, and cases are on the rise. As many have said before, Gujarat under Modi ignored healthcare and education. Today Gujarat has 10 times the number of Covid-19 cases as Kerala.

Meanwhile, as if oblivious to the reality of the decline of India, Modi continues with his political games. Madhya Pradesh was toppled in the midst of the coronavirus pandemic, and now Rajasthan seems to be going under as a result of horse-trading. The capture of total political power seems to be the only aim. There is no real expectation of achieving something with it.

This is the reality of India under Modi after six years, surely enough time for a messianic leader to produce the miracle. If he hasn’t produced it, it is because he was never capable of producing it as many have been saying for a long time. His diagnosis was wrong, and his cures have been proved to be worse than the disease.

The interesting thing is that it has made no difference to his supporters. They continue in their adulation. Real, concrete, verifiable damage to India inflicted under Mr Modi and inflicted because of him is acceptable to them. We can only conclude that it is indeed right to call them bhakts, meaning mindless devotees.