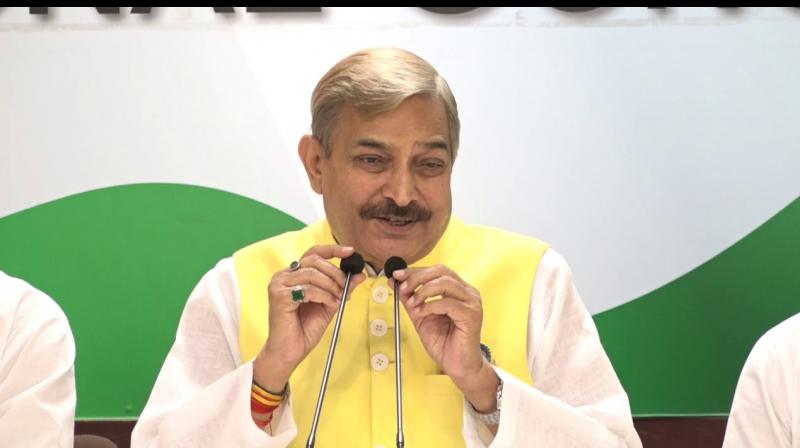 Stating that this communication had broken down after Patel’s death, Mr Tiwari requested that the Congress president fill this spot with the appointment of a senior party leader who has administrative experience and a good working relationship with party workers. (Image credit: Youtube)

Senior Congress leader Pramod Tiwari took his colleagues by surprise at the party’s working committee meeting last week when he referred to Ahmed Patel’s passing and suggested that someone be appointed to take his place. Mr Tiwari pointed out that as Congress president Sonia Gandhi’s political secretary, Patel played a pivotal role in bridging the gap between her office and the party at large. Stating that this communication had broken down after Patel’s death, Mr Tiwari requested that the Congress president fill this spot with the appointment of a senior party leader who has administrative experience and a good working relationship with party workers. This left everyone wondering if Mr Tiwari was pitching for former Madhya Pradesh chief minister Digvijaya Singh.

At a time when the country is witnessing its worst health crisis, it would be expected that Prime Minister Narendra Modi’s Cabinet colleagues would have enough on their plate these days. And yet Union ministers are busy writing articles or getting well-wishers to pen newspaper columns either attacking the Opposition or trying to burnish Mr Modi’s image which has been severely dented by his government’s poor handling of the pandemic. For instance, urban development minister Hardeep Puri obviously has plenty of time to respond extensively on Twitter to critics about the Centre’s decision to continue with the Central Vista redevelopment project, which includes the construction of a palatial new home for the Prime Minister, during the pandemic. Mr Puri was beside himself with anger that “canards” were being spread about the PM’s dream project though he was unable to explain the rush to declare the construction as an essential service at a time when people are battling for their lives due to lack of oxygen, hospital beds and medicine. Then, again a furious Mr Puri posted lengthy tweets in response to Congress leader Jairam Ramesh’s post mocking the decision to use Mr Modi’s photograph on vaccine certificates. Mr Puri’s colleagues are similarly engaged but none has cared to empathise with those suffering or offered condolences to families who have lost their loved ones.

Pragya Thakur, the controversial Lok Sabha MP from Bhopal, finally put in an appearance in the Madhya Pradesh capital last week after a gap of over two months. Ms Thakur ensured that her arrival was duly noted by the local media as photographers and reporters were assembled to witness and record the distribution of face masks and steamers to needy persons by her. She subsequently disappeared after the photo-op. Pragya Thakur has acquired a reputation for going missing on the pretext of undergoing medical treatment each time the Bharatiya Janata Party or the Madhya Pradesh government are in trouble. Thakur was nowhere to be seen during the first wave of the pandemic last year and it was no different this time which prompted a Congress leader to announce a reward for the “missing” MP. Her absence has been particularly glaring during the second surge of coronavirus infections as Bhopal has been among the worst affected cities in the state.

Superstar Amitabh Bachchan’s donation of Rs. 2 crores to the Delhi Sikh Gurdwara Managing Committee for a covid centre at Gurdwara Rakab Ganj has set the proverbial cat among the pigeons. With the DSGMC heading into elections, Bachchan’s donation has become a hot-button issue with the committee’s former presidents Paramjit Singh Sarna and Manjit Singh G.K. coming down heavily on the current head Manjinder Singh Sirsa for accepting money from the actor. According to them, Bachchan was closely associated with Rajiv Gandhi and was suspected of supporting the anti-Sikh riots which followed Indira Gandhi’s assassination in 1984. Bachchan’s money, they maintained, is tainted and should not have been accepted by the DSGMC. They demanded that Sirsa be removed immediately. Several other members of the Sikh community also joined this chorus with an eye on the DSGMC elections.

The plight of Bharatiya Janata Party legislators in Uttar Pradesh today is similar to that of their counterparts in Punjab some months ago. Like Punjab MLAs and MPs, who went into hiding when faced with the wrath of agitating farmers, legislators belonging to the saffron party in UP are now at the receiving end as they are unable to respond to desperate requests from their constituents for hospital beds and oxygen. The health infrastructure in the state has proved to be woefully inadequate as the second wave of the coronavirus pandemic has ravaged both cities and the rural areas, taking a heavy toll on people’s lives. Predictably, the BJP MLAs are a worried lot. The Assembly elections are due early next year and, if people’s anger persists, they will have a tough time getting re-elected. Meanwhile, UP chief minister Yogi Adityanath’s office is busy putting a gloss on the horror stories being reported on a daily basis, pointing to an article on the WHO website praising the state government’s efforts in micro planning, house visits and concurrent monitoring of the coronavirus cases, ensuring that nobody missed access to health care services.