The AAP is muscling in some other regions just as it muscled into Delhi and Goa at the cost of the Congress. 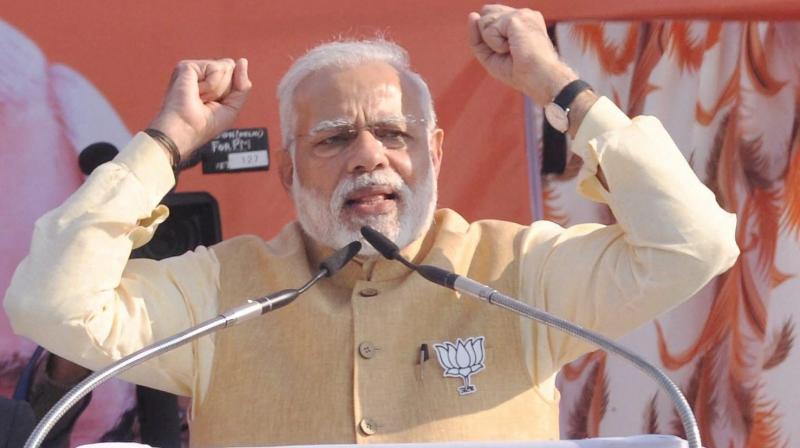 The general belief that the Akali Dal-BJP alliance is facing an ignominious defeat in Punjab and that it is the AAP that seems to be in pole position has opened up room for all sorts of speculation about new political alliances. This has acquired piquancy now that most knowledgeable observers hold that the BJP is facing a similar rout in western UP. (We will have to wait for the results on March 11.).  In 2014, the BJP won UP with over 42 per cent of the vote winning all the Lok Sabha seats except the seven Yadav and Gandhi family fiefdoms. But it was in western UP that the BJP fared really spectacularly. Here, in the area that went to vote on February 11, the BJP won 18 of the 22 seats by polling more than all other parties together.

In the months before the elections, there were bloody communal riots in Muzaffarnagar and surrounding areas in the epicentre of the Jat heartland. The RSS whipped this into a frenzy that gave the BJP 52 per cent of the popular vote. Narendra Modi himself led the charge here and made sneaky references to the recent relative prosperity of some of the Muslim community to the “pink revolution”, which was a code phrase for cow slaughter. The blood-soaked green fields yielded a bountiful saffron harvest. If the BJP loses its primacy here, its experiment with its not very covert sectarian politics is over. Its chances in 2019 are then seriously imperiled.

The Congress is in retreat everywhere in the country. If it gets more MLA seats now, it will be because it clung on to Akhilesh Yadav’s coat-tails. There is now no Indian state where the Congress has primacy. In the big states of UP and Bihar it is a coat-tail party. The AAP is muscling in some other regions just as it muscled into Delhi and Goa at the cost of the Congress.

Shortly after the AAP victory in Delhi in 2015, I had written that the AAP victory was more due to the wipeout of the Congress than due to any precipitate decline of the BJP base. My comment attracted the ire of many AAP trolls. (Their tribe is increasing.)

The AAP is now poised to expand into other states. Gujarat is next in its agenda. It is going straight for Narendra Modi’s jugular. It is this kind of daring that endears the AAP to the youth. I am veering around to the view that the main challenge to the Congress now is not from the BJP, despite its exhortations of a Congress-mukt Bharat, but the AAP that is rapidly positioning itself as the party to go to in many supposed Congress strongholds.

For decades Opposition politics in India centred on finding an alternative to the Congress. This activity consisted mainly of forging improbable, impossible and often even unholy alliances. After 1991, anti-Congressism was no longer a binding force.  The post-V.P. Singh era saw cobbled- up alliances with the Congress as a part of it did not inspire too much confidence either. The BJP expanded into the subsequent unrelenting anti-Congress space. It still holds this space. Ironically, the parties that once were united by Lohia’s battle cry against parivarvaad have now become parivar-dominated parties.

In states like Odisha, West Bengal, Tamil Nadu, Bihar, UP, Maharashtra, Andhra and Telangana, the regional parties have reduced the Congress to a rump though from time to time they team up with the Congress tagging on as its junior partner. These state elections will definitely see the Congress getting more seats than it had in Punjab and UP, but it will not mean any long-term gains for it. In UP, it will be entirely thanks to the SP and in Punjab it will have to hold off the now apparently-relentless AAP expansion.

The other non-BJP and Congress parties are now squeezing what is left with the Congress —  states where it is either the dominant or next leading party.  Soon it seems like it will only be in MP that the BJP and Congress will face each other as the two dominant parties. This is rather ironical considering that L.K. Advani, who strategised the rise of the BJP to power, would from time to time loudly contemplate a two-party democracy in India, and that this would be ideal for India. He never wanted a Congress-mukt Bharat. He saw the emergence of a right of centre- and left of centre- contested polity as the ideal. But this is, alas, not going to happen. What we are going to get seems to be a contested polity between an ultra-nationalist right-wing and a formation of populist regional forces.

Ironically, it is the AAP that gave hope of new politics and political style. Will it be able to regain its idealism and hold its course?  India now has 120 million voters in the18-23 age group. By 2019, another 130 million will join this phalanx. Truly, the future belongs to the youth. Over 60 per cent of India lives below a universally accepted poverty standard. India’s poverty line is a starvation line. Almost the entire youth cohort now is educated, having benefited by the huge expansion of the education system. Their aspirations and the popular aspirations have changed. To grow, the AAP has to uncompromisingly nurture this and build on this. It has so far done this fairly well in Delhi despite the gang-up of the BJP establishment and establishment media against it. But can it replicate it nationwide?

But Narendra Modi unites the Opposition, like Indira Gandhi once did. That time, the RSS joined it against the Congress. Now the Congress is with it against the BJP. The temptation for the AAP to team up against the BJP are many. But the moment it gets sucked into the caste permutations of the BSP, SP, RJD and JD(U), and gets drawn into their coalitional politics, it will become just another political party. Another aya ram, gaya ram party.