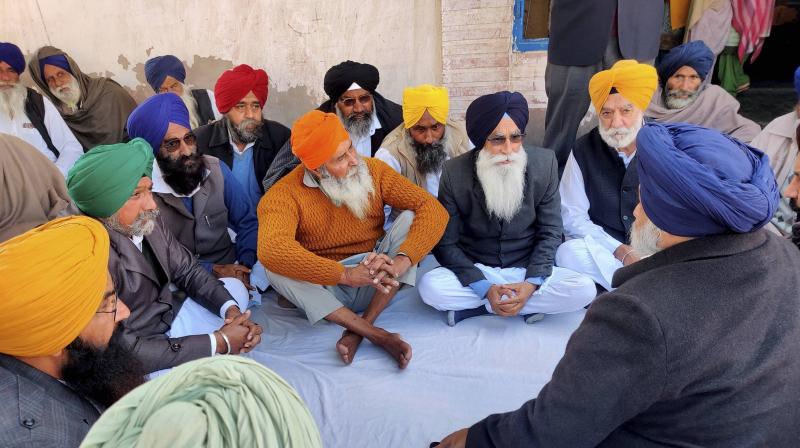 The Akalis, who have been the major political voice of the Sikhs, have not been in the forefront of the agitation now that they walked out of the government and the NDA on the very same issue. (Representational Photo: PTI)

It was on the day the farm bills were passed in the Lok Sabha that the Akali Dal’s Harsimrat Kaur Badal, Union minister for food processing, announced her resignation from Prime Minister Narendra Modi’s Cabinet in September 2020. She said her party was opposed to the bills, and that the government went ahead without heeding the protest of her party. But the Akali Dal then, and in the past three months since, did not state the specific reasons for their opposition to the farm legislation. The resignation of Ms Badal seemed to be an expression of despair rather than defiance. After leaving the government and the ruling National Democratic Alliance, neither the BJP nor the Akalis have attacked each other.

The BJP had attacked the Congress, and the Congress government of Amarinder Singh in Punjab, for opposing the farm laws as an act of hypocrisy. Home minister Amit Shah initially blamed the “Khalistanis” for fomenting the agitation, but later both Mr Shah and his party have refrained from targeting “Khalistanis” fearing the trouble it may unleash.

But television news channels supporting the Narendra Modi government have tried to build a counter-narrative that the Congress was using the “Khalistanis” to subvert the farmers' agitation as it once did in the late 1970s and early 1980s to outflank the Akalis in Punjab’s politics. It is a line of argument that the Modi government and the BJP would still be wary of using because of the uncertain fallout and the stance of the Sikh diaspora’s political leadership in places like Britain and Canada.

The information and broadcasting ministry had recently issued a 188-page booklet, enumerating the many things that Prime Minister Modi and his government have done for the Sikhs, indicating as it were that the government sees the ongoing agitation as that of Punjabi Sikhs and not as that of farmers per se. But is appears the Sikh outreach through the booklet did not evoke any positive response.

The Akalis, who have been the major political voice of the Sikhs, have not been in the forefront of the agitation now that they walked out of the government and the NDA on the very same issue. It is not clear what the equation is between the Akalis and the leaders of the farmers’ unions.

The farmers’ spokespersons told a Hindi television news channel that the farmers were not opposed to Mr Modi nor to the BJP, and that as a matter of fact they (farmers) had voted for the BJP. So, it has been made clear that if the Centre repeals the laws, the farmers will remain with the government.

It is this stand of the farmers that might be holding the Akalis back from entering the fray and declaring their opposition to the Modi government. They may still be looking to return to the NDA and to the government once the standoff between it and the farmers ends.

It is, of course, standard practice that political parties do not usually spearhead the agitation of a section of society though they would support it from the outside.

It is indeed the case that both Akalis and the Congress in Punjab would like to support the farmers’ agitation and expect in return the vote of the farmers at election time.

If the impasse is over, and the Modi government manages to reach an agreement with the farmers, the Akalis might stand to gain. If, however, the impasse continues, there is the possibility that the Akalis might want to join hands with the Congress, as the Shiv Sena and the Congress did in Maharashtra, to oppose the BJP. At the moment, despite the silence and invisibility of the Akalis, there might be an active back channel between the Akalis and the BJP.

There is also the danger, as far as the Akalis are concerned, that if the BJP makes a peace deal with the Punjab Sikh farmers, Mr Modi and Mr Shah, who are forever on the lookout to expand the BJP’s footprint, may absorb the Sikh constituency and the Akalis may be left high and dry. This was this strategy that backfired for the BJP in Maharashtra when it tried to undermine the Shiv Sena.

It looks like the farmers are confident that they can argue their own case, fight their own cause, and don’t need to depend on political parties. It is the parties who need to woo the farmers. That even ostensibly farmers’ parties like the Rashtriya Lok Dal and Samajwadi Party in Uttar Pradesh, and Indian National Lok Dal and the Jannayak Janta Party in Haryana, can’t take the farmers for granted is evident in their unflattering electoral performance in the past few years. It is then reasonable to infer that the BJP would want to carve out its own farmers’ constituency.

Akali Dal leaders have held on to their belief that they represent the Punjabi constituency, taking advantage of the Sikh identity of Punjab’s farmers. The Sikh element in Punjab’s politics simply cannot be wished away. The BJP, on its part, will have a problem in balancing its Hindutva politics with that of the Sikh minorityism of the Akalis.

The farmers themselves have kept the protest as a farmers’ issue, pure and simple. They kept the ideologues of all stripes at bay. They are pressing on the simple issue of seeking repeal of the three farm laws. Economic experts explain the protest as anti-rational. The farmers, however, believe that their demand is rational too. The Akalis’ obligation at this point is to argue the case of the farmers so that the entire country knows that the farmers are not being obtuse and obdurate.