Demonetisation and after — the story refuses to move out of the front page or prime time television. 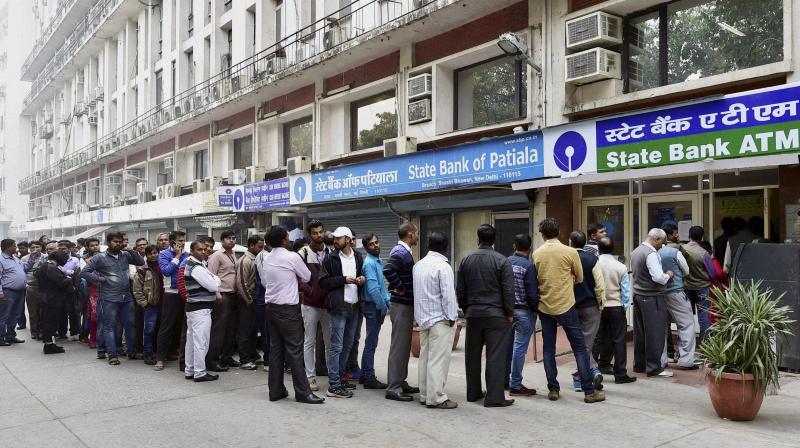 People queue up at an ATM to withdraw cash in New Delhi. (Photo: PTI)

As the year draws to an end, with India in a frenzy about how to go cashless, I am reminded of the title of Erica Jong’s wickedly funny 1977 bestseller How to Save Your Own Life. That book dealt with the gradual stages by which a marriage comes apart. It was lauded by People magazine for being “shameless, sex-saturated and a joy”, and was described by writer Anthony Burgess as one of the 99 best novels published in English since 1939.

Angst and ATM queues don’t inspire libidinous thoughts. But going by the zillions of words which have been used to advocate the happy, happy state of going cashless, I wonder if a book isn’t due on “How to Junk Cash and Rev up your Life”.

This week, one of my favourite pink dailies thoughtfully listed all the ways in which the Narendra Modi government is trying to get us excited about having “less cash”.

If only you junk cash, and switch to plastic or mobile wallets, there is a bag of goodies waiting for your pick — discounts on purchasing petrol, booking season tickets in suburban trains, paying premium for LIC policies.

There is more. Government departments have been tasked with persuading the hoi polloi to junk cash in every way they can: local bodies have been instructed to ensure electronic payments for utilities; here is a 24-hour free to air TV channel called DigiShala to educate citizens about the good times ahead as we gallop towards a cashless state. And a nationwide toll-free helpline number “14444” is being launched soon to provide support related to cashless mode of transactions. The last is reportedly an idea pitched by Nasscom. Going digital can also lead to a lottery prize. Come 2017, expect more goody bags.

Demonetisation and after — the story refuses to move out of the front page or prime time television. As with Jong and her books, it is hard not to be aroused, one way or the other.

As India hurtles towards a less-cash economy, some worry about Bharat. Will everyone catch the tech train? Is this the winter of our discontent? Or are we all set for happy, heavenly times? Will the government be as proactive about addressing cyber crimes concerns as it is about digitising India at breakneck speed?

The questions and the answers have been swirling around for some time. But they have gathered speed only in recent days after the official demonetisation narrative pivoted from decimating black money and terror funds to decimating the cash economy. Don’t blame yourself if you’re confused, because what you hear depends on who you speak to, and there are many conflicting voices out there.

What are ordinary people supposed to do, specially when reminded of incidents like the one in October this year when over three million debit cards and their pin numbers were stolen by hackers; and the more recent high-profile hacking incidents targeting politicians and journalists with a huge fan following on the social media? The second one may not have led to monetary loss but has underscored the urgent need to strengthen cyber security.

A few things are beyond dispute. Arguably, India is not the only country facing such threats. But it is equally true that this country has its own set of challenges, which can’t be brushed under the carpet. Mr Modi’s cashless dream society is not going to be easy given the facts on the ground.

Cyber attacks are growing in frequency, severity as well as impact. In India, from 2011 to 2014, there has been a rise of approximately 300 per cent in cybercrime cases registered under the Information Technology Act 2000. The Indian Computer Emergency Response Team (CERT-In), the national nodal agency for forecast, analysis and response to cyber incidents, has also reported a spike in the number of incidents handled by it, with close to 50,000 security incidents in 2015.

In its latest monthly advisory, CERT-In notes that the increasing usage of smartphones has enabled individuals to use various applications, including mobile banking applications. It also lists the threats to mobile banking from “malwares”. The agency advises downloading and using anti-malware protection for mobile phones and tablet devices, among other measures.

Many of us do the needful. But many of us can’t. There are millions of people across India who may have a mobile phone and access to the Internet but have little education and even less awareness about cyber security issues. Add to this infrastructure issues like power outages, poor connectivity and so on. What will it be like if all towns and villages were to suddenly go cashless without the necessary arrangements and security awareness being in place?

It is not that the government is unaware of the problems on the ground. It has started citizen awareness programmes aimed at preventing cybercrime. But since citizens are not alike, their ability to absorb this avalanche of information all at once will vary.

Recent data shows that there is greater consumer readiness to adopt digital payments. High-decibel campaigns promoting digital wallets are nudging many Indian consumers towards mobile payments. The trouble is, all this also makes India more attractive to cybercriminals.

You don’t have to be a cyber expert to realise that the push towards Digital India will succeed only if it is backed by an equally strong push towards cybersecurity.

For digital payments to work, people have to trust the system, and they have to protect themselves against cybercrime. This requires behaviour change, which cannot be coerced. It has to be done through persuasion. That means building trust, which takes time. But it is a must. We Indians will go really cashless only if we feel comfortable and safe doing so.