India has sufficient goodwill in diverse quarters in Afghanistan, but it gave no impression of leveraging this 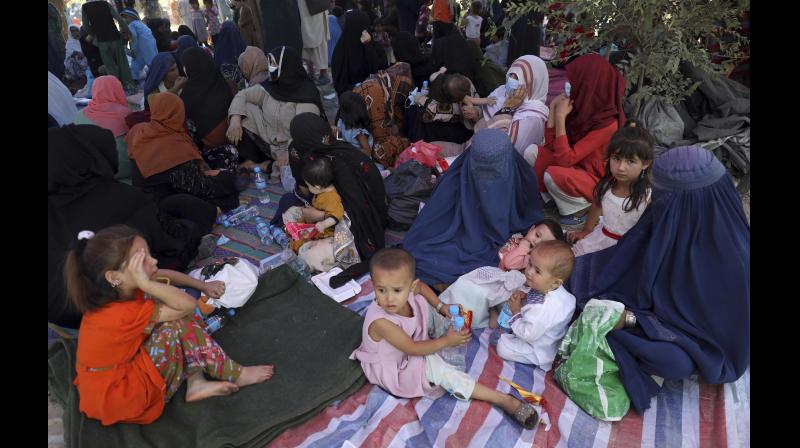 More than 50,000 internally displaced people, a large number of them being women and children, are said to have taken refuge in parks and on pavements in Kabul which would fall at the pleasure of the insurgency leadership. (PTI)

Upon the sudden pullout of the American military forces starting May 1, the lightning advance of the Taliban, who are now camped at Paghman, Sarobi, and Charsiyab — literally at the doorstep of Kabul — after their spectacular capture of major towns and cities across the country in recent days, leaves Afghanistan on the brink of a major historical churn.

What hue the new administration of the Taliban takes is for now speculative, by whatever name it may choose to proceed. But what is beyond question is that the Taliban have remade their history. At this very moment they are in the thick of the process of reclaiming full control over the country which they had lost in 2001 when the United States entered the picture with its massive air power.

The return of the Sharia fundamentalists, who had ruled Afghanistan with brutality in 1996-2001, brings to a close a two-decade interregnum in which the country overtly proclaimed its endorsement of the democratic ideal with India’s help in considerable measure, although this aspiration was always going to be a struggle in a deeply conservative society yet to fully come to terms with the survival idioms of modernity.

In that post-Taliban phase, the country — with international assistance — could raise the standards of education and health, making it possible for young girls and women to claim a place in the public sphere, especially the media, schools and colleges, the sports ground, the police force, the field of gender relations and human rights, and the provincial and national legislatures which they entered through the electoral process just like the men.

Today, however, families, women especially, are fleeing areas of Taliban control. More than 50,000 internally displaced people, a large number of them being women and children, are said to have taken refuge in parks and on pavements in Kabul which would fall at the pleasure of the insurgency leadership.

In all likelihood, they would wait for the evacuation of the US embassy personnel to facilitate which some 4,000 American forces have arrived. Even a chance armed clash with US troops will be impolitic and unwise from the Taliban perspective. It is possible that the Indians too will evacuate their embassy soon.

This may be a necessary precaution. At a time when the Taliban are entering to claim the position they once held, it may not be worth their while to attack Indian personnel or assets. In fact, there should be no surprise if the insurgent leadership takes due note of the full-spectrum development work that India has done in Afghanistan, and supported capacity-building on a massive scale.

Pakistan is another matter, however. Its death squads may find the conditions of chaos ideal to ply their trade against those they perceive to be its enemies.

The irresponsible manner of the American withdrawal in the dead of night from its key military base at Bagram on July 6, without any notice, without even a ritualistic military farewell, leave alone deliberations with the Afghan leadership and security forces on planning, logistics, and command and control matters and other transition arrangements, is beginning to give many people the feeling that Biden’s America has practically willed a Taliban politico-military takeover, not least to assuage Islamabad in a geopolitically sensitive part of the world.

The manner of America’s departure stripped President Abdul Ghani’s government of any remaining legitimacy it had — and this impacted the functioning of the security apparatus and the armed forces. The lack of political confidence began to be felt all around.

As a result, in province after province, local tribesmen and political elders, as well as significant parts of the security apparatus smoked the peace pipe with the Taliban. Even the majority Hazara community, who are Shia Muslim, threw their lot in with the fiercely Sunni Taliban in Daikundi province in central Afghanistan, probably on the suggestion of Iran. Not fighting and avoiding bloodshed was wise.

Afghanistan has not forgotten the images of the last civil war which had erupted in the early 1990s, not long after the Soviet withdrawal.

For all practical purposes, the Taliban fighters have written their history this time around without a fight. The well-trained and well-equipped Afghan Army, over the years too used to US-Nato operating procedures, including airconditioned living, collapsed under the weight of poor military leadership which in turn found itself at sea when all political coherence and perceived legitimacy evaporated.

This is not surprising. The Doha agreement was reached practically in secret, bypassing the Ashraf Ghani government in Kabul and behind the backs of the leading political players of the country, but in consultation with the Pakistanis. The Indians were cut out of the picture. The result: the Taliban, and Pakistan, are extraordinarily encouraged, and the peace and democracy constituency within Afghanistan shaken and discounted. US President Joe Biden has been made an object of scorn in his own country, and not just by his Republican opponents, for not taking meaningful steps to preserve the gains of the past two decades.

In the absence of political coordination within the domestic political sphere even when the US military machine had elaborately advertised its departure plans, a sense of military disarray was practically custom-made. And this is on full public view now.

President Ghani was far from being a consensus-seeker. While it is true that former President Hamid Karzai did engage his political contemporaries to bring Mr Ghani on a common platform to project Afghan unity when the Taliban had begun to harrumph, did he do enough? And did the others do enough? Such questions are apt to be asked.

India could have aided in catalysing the political process. It has sufficient goodwill in diverse quarters in Afghanistan, but it gave no impression of leveraging this. It was never going to be enough to hold a special meeting on Afghanistan at the UN Security Council of which it is chairman for a month on the rotation principle.
New Delhi has failed to appreciate that military gains are made possible through political cohesion and common strategising. For India, the regional geopolitical horizon has suddenly narrowed in a crucial region.