Anita Katyal | Is ‘ordinary’ PM trying to steal a march on Nehru the writer? 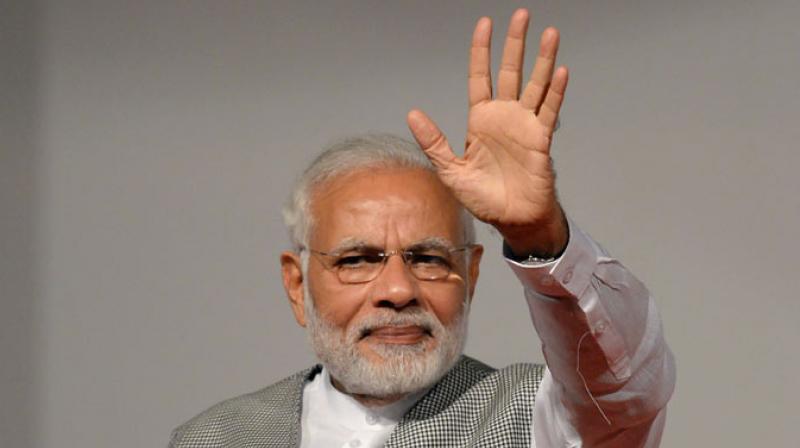 Though Prime Minister Narendra Modi constantly runs down Jawaharlal Nehru, he is obviously keen on emulating him.

This is the interpretation given by Congress insiders to the news that a collection of letters written to “Mother Goddess” by Mr Modi as a young man are to be published this month.

Translated from the Gujarati Saakshi Bhaav by Bhawana Somaaya, the concept of “Letters to Mother” appears to be borrowed from the collection of letters written by Nehru to his daughter Indira in 1928 when he was in jail. Titled Letters from a Father to his Daughter, this collection was translated into Hindi by well-known writer Munshi Premchand.

While Nehru’s letters provide an insight into the evolution of mankind and natural history, Mr Modi’s letters are described as conversations with Mother Goddess and his feelings of fear and anxiety.

“The ordinary feelings of an ordinary man.” According to the publishers HarperCollins, young Modi had got into the habit of penning a letter to Mother Goddess every night but he would invariably destroy his letters subsequently.

However one diary survived and has now been published. And to avoid any comparisons with Nehru’s work, Mr Modi confesses that he is no writer and that the letters are “reflections of my observations and sometimes unprocessed thoughts, expressed without filters.”

Luck really seems to be favouring Uttarakhand chief minister Trivendra Singh Rawat. A recent survey, conducted by a private research organisation on the performance of Bharatiya Janata Party chief ministers, placed Mr Rawat at the bottom of the list.

But Mr Rawat is sitting pretty as all his rivals are conveniently out of the way.

Bhagat Singh Koshiyari is well ensconced at the Raj Bhavan in Maharashtra, Ramesh Pokhriyal is busy handling the human resource development ministry in Delhi while party media chief Anil Baluni is recovering from an illness.

The party leadership in Delhi has no time to focus on the state as it is busy managing the Covid-19 pandemic and with the coming Bihar Assembly polls.

Even his political opponent, former chief minister Harish Rawat, is giving him an easy ride.

On the other hand, former Congress leader Jyotiraditya Scinida has had a run of bad luck in recent months.

He joined the Bharatiya Janata Party on the promise of a Rajya Sabha seat from his home state Madhya Pradesh and a ministerial berth in the Modi Cabinet.

But the election to the Upper House had to be deferred because of the Covid-19 pandemic, thus delaying his induction into the Union Cabinet.

And now that the election has been fixed for June 19, Mr Scindia tested positive for coronavirus and is currently undergoing treatment in a Delhi hospital. Furthermore, reports from Bhopal say there is trouble brewing in the BJP’s state unit as party legislators are upset that Scindia has not bothered to meet them to seek their support for the June 19 election, considering they are the voters in a Rajya Sabha poll.

In fact, the BJP MLAs have been unhappy ever since Mr Scindia and his loyalists joined their party as the newcomers have been promised ministerial berths which will obviously scuttle their chances of being upgraded.

Congress spokesperson Sanjay Jha’s recent column criticising the party for lack of internal democracy and its inability to develop a sound political strategy for revival, has put the proverbial cat among the pigeons.

A number of younger leaders, who have been sidelined by the Congress old guard, apparently called Mr Jha to say that though they privately agree with him, they had no choice but to criticise him publicly.

On the other hand, there is a section in the Congress which was quick to point out that Mr Jha’s public outburst showed that it does not pay to promote what they describe as “lateral entrants” who have no grassroots base.

This has led to a growing internal demand that such “paratroopers” should not be fielded to speak for the Congress on television channels, and should definitely not be given any important position in the party organisation.

Bihar chief minister Nitish Kumar has a lot on his plate these days. He has to manage the influx of migrants who have returned to their villages from the cities where they had gone to earn a livelihood.

Then he has to deal with the spurt in the coronavirus cases and also begin preparations for the coming assembly polls. Despite all these preoccupations, Nitish Kumar’s “litchi diplomacy” continued unhindered.

There was no stopping the annual ritual of sending baskets of the state’s famous Jardalu mango and Muzaffarpur shahi litchi to his political friends and Bihari journalists based in Delhi.

Though all top BJP leaders are on Nitish Kumar’s list, no one is close to the late Arun Jaitley when it comes to appreciating the delicious fruit from Bihar.

Jaitley often spent hours talking about the juicy and flavourful litchi from Muzaffarpur.