As the world focuses on fighting coronavirus, US claws are out, groping the Venezuelan coastline, using Colombian territory as its own 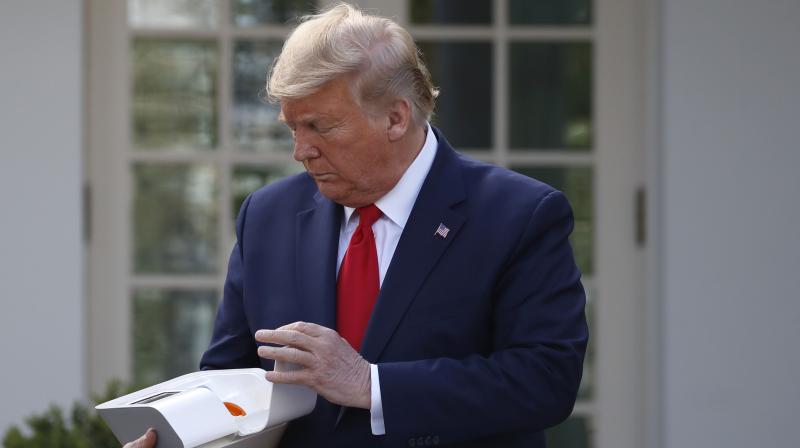 In this March 30, 2020, file photo, President Donald Trump opens a box containing a 5-minute test for COVID-19 from Abbott Laboratories as Stephen Hahn, commissioner of the U.S. Food and Drug Administration. AP Photo

When the tortoise agreed to ferry a stranded scorpion on its back across a river, he didn’t know what he had bargained for. Midway, the scorpion stung the tortoise, deep, through its hard shell.

“Why have you done this?” asked the tortoise. “Now we shall both drown.”
“It’s in my nature,” said the scorpion.

Given its own self-esteem, the United States should have been “ferrying” the world through the coronavirus pandemic. Unfortunately, it is itself so overwhelmed that it has no time for leadership. Fair enough, let the US protect its people. But Donald Trump’s Washington isn’t only making a mess, it’s aggravating the world’s problems. The tortoise didn’t live to digest the lesson: a cooperative order is simply not possible with Mr Trump.

If US capitalism in the post-Cold War world were scripted like a Webster melodrama, the audience should be ready for some frenetic tattooing by the “scorpion”. As the world focuses on fighting coronavirus, US claws are out, groping the Venezuelan coastline, using Colombian territory as its own. Eight mercenaries are dead, as two pedigreed Americans are in Venezuelan custody, presumably singing like canaries. Wordsmiths have already named the expedition “Bay of Kids”, so infantile has this latest US adventure been to unseat Nicolas Maduro. Former Green Beret Jordan Goudreau claimed responsibility. President Trump has closed his gloves like a pugilist on the defensive: “I knew nothing about it.”

Of course he knew as much as he did about Blackwater founder Erik Prince’s idea of “privatising” the Afghan war. Don’t laugh! Prince’s 100-page dossier spelt out how Afghanistan should be privately governed. The proposal was considered by freaks in the administration. Under the plan, Afghanistan would be ruled, as India once was, under a viceroy. The plan was shot down. But Prince proved his resourcefulness again in Venezuela. London’s Guardian said Prince secretly met one of Maduro’s closest allies, vice-president Delcy Rodriguez, who also handles security. About eight months ago, Prince suggested an invasion of Venezuela by “a private army of 5,000”. This was after the US recognised Juan Guaido as the Opec nation’s “legitimate President”. Which side of the street was Prince playing? The tricks didn’t work. Donald Trump has to go into an election with a military failure in his backyard. Will his cohorts allow him to?

The world has been persuaded to put its head down on corona. But this doesn’t stop Mr Trump’s military adventures: holding US-Sri Lanka joint training drills in March-April at Sri Lanka’s Trincomalee military base despite a travel ban due to the pandemic.

This bonhomie was at a time when corona-stricken aircraft carrier USS Theodore Roosevelt was advised to dock in Guam. Over 4,500 crew were moved ashore. The Sri Lankan Navy’s and Army’s spike in corona cases can be traced to their companionship with US military personnel.

How can one raise fingers at the island nation’s obsequiousness when the great nation to its north circumvents its own rules to ship hydroxychloroquine to the US as Mr Trump threatened “retaliation” if he weren’t helped in his hour of need.

That isn’t all. The man who is building a wall to keep Mexicans out sends a stark message to his southern neighbour: American economic interests supersede Mexican health interests. In other words, let workers operate factories vital not for Mexico but to the US, pandemic or no pandemic.

Germans coped with that mentality in March: the Trump administration tried to lure a German firm, CureVac, to the US. This isn’t where the US’  audacity ends. A vaccine, jointly developed, would be available first to Americans. Angela Merkel’s government politely showed US negotiators the door.

In the German episode, the US comes across as almost elegant compared to the highway robbery on the tarmac of a Chinese airport where PPE kits were being loaded for European destinations. US “highwaymen” paid three times the amount and diverted the equipment to America. The French officials called it the “war of masks”.

Meanwhile across the sea, Mr Trump’s Sancho Panza (or is it the other way around?), Israel’s Benjamin Netanyahu, is stepping up airstrikes against Syria, trying drone drone assassinations of Hezbollah field commanders, and trying to pulverise the “axis of resistance”, with Iran as the prime target. The idea is to provoke just sufficient retaliation to enable Mr Netanyahu to survive corruption charges, also to give Mr Trump a chance to beat war drums, always a useful strategy in election season, particularly when the ratings are not promising.

The “Bay of Kids” and his Gulf gyrations pale before the high wire act he seems to be developing (or bluffing) vis-a-vis China. Financial Times’ Martin Wolf is one of the many commentators who have chastised Mr Trump’s “irresponsible” diatribe without any credible evidence.

The supremacist, neo-Nazi rally at Charlottesville, Virginia, some years ago, attended openly by KKK and sundry white nationalists, led to waves and ripples that never really subsided. “There are very fine people on both sides” was Mr Trump’s immortal observation, balancing Klansmen and the counter-protesters.

From that persona, Mr Trump never really distanced himself. The result is rampaging anti-Semitism. Israel’s respected newspaper Haaretz has expressed concern. Several US protests against measures taken by states to control coronavirus have featured swastikas and worse.

Jewish Centre for Public Affairs CEO David Bernstein is convinced “as more people become economically disaffected, the more they will look for scapegoats”. Since the economic downslide is on an epic scale, so will the corresponding racism grow in America and elsewhere. Should Mr Trump win a second term, we shall all surely go down like that tortoise, gasping.