In these circumstances, India must learn to do its own sums even as it seeks to be collegial 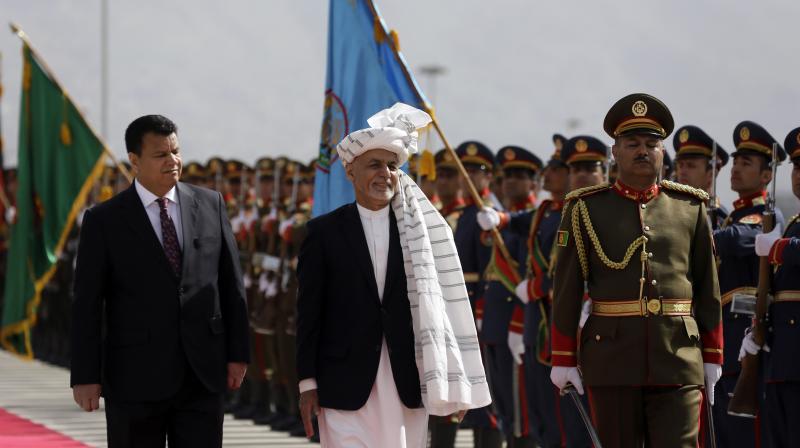 Afghanistan is said to be the graveyard of empires, but it is also proving to be the breeding ground of ironies. Trophies are sought to be handed out to the most violent. (Photo: AP)

It is becoming apparent that the Americans are finding it hard to orchestrate their plan to get out of the Afghan quagmire. The way things are going, an outcome satisfactory to all is unlikely from the set of ideas that Washington has lately advanced.

In these circumstances, India must learn to do its own sums even as it seeks to be collegial. Its abiding interests in the Afghan theatre are self-evident. Its best bet is to align with the people of Afghanistan at a crucial juncture and to develop working relations with key constituencies, banking on the goodwill it has earned.

The Biden administration’s ideas were projected in a letter by the secretary of state Antony Blinken to President Ashraf Ghani, and the so-called draft peace proposals canvassed by Zalmay Khalilzad, the US special envoy for Afghan Reconciliation, to enable constitution-making afresh (in a new order), shape post-US governance through an interim government to start with and pave the way for a comprehensive ceasefire.

Practically rejecting this line, President Ghani declared on March 6: “Transfer of power through elections is a non-negotiable principle for us.” He further said that he was ready to discuss free and fair elections “under the auspices of the international community”.

“We can also talk about the date of elections and reach a conclusion,” the Afghan President added, showing readiness to forgo more than half his term. The President’s words were pithily reaffirmed by vice-president Amrullah Saleh, a redoubtable former intelligence chief, suggesting that this is a deliberated position -- indeed, the articulation of an alternative formulation to America’s.

While the response of the key Afghan political elites like former President Hamid Karzai, chairman of the country’s reconciliation process Abdullah Abdullah, and others to the US proposals isn’t developed yet, President Ghani’s interjection can leave little doubt that the US plan is facing rough weather inside Afghanistan.

There are indications the Karzai group gives little credence to guarantees for peace the regional powers may offer at America’s behest at the proposed UN-led conference in Turkey. Also, it is not enamoured of the idea of an unelected “guidance council”, or shura of theologians, to exist alongside government structures in the US scheme -- virtually a vetoing authority that may give the Taliban a further edge.

After Mr Ghani’s public stance, taken in the Afghan Parliament, on March 8, a US state department spokesman was quoted as saying that it was “too early to say how the peace process is going”. This seemed a dose of realism after Mr Blinken’s hectoring letter.

President Ghani is neither widely popular, nor known to be a consensus-builder, but he does represent the current Afghan Constitution which the US had helped fashion (along with then-interim President Hamid Karzai) in 2004, and which New Delhi had gone to considerable lengths to back. The gains arising from this Constitution at the popular level are backed by the new generation of Afghans, the largest constituency.

The Blinken epistle favours an UN-routed conference in Turkey (a “Bonn 2” of sorts) of leading countries that ring Afghanistan (India included, though it doesn’t have a border with that country), presumably to get them to agree to a “unified approach” on Afghanistan’s future.

This is not only wispy, it is self-serving. Does the US seriously believe that Pakistan, China, Russia, Iran and India, besides America itself (the six countries Mr Blinken envisages will be at the table), can project a “unified approach” as “these countries share an abiding common interest in a stable Afghanistan”?

While Pakistan and China may be expected to be favourable to the Taliban outright, what the US is perhaps really saying is that Iran, India (and Russia) should lump it and accept the Taliban’s hegemony in Afghanistan once the remaining American troops have exited. Even if India or Iran can develop a functional relationship with the Taliban in time, how realistic is this prospect in the immediate future?

The US of course already accepts the Taliban as the hegemon. That indeed was the basis for the earlier Trump administration to reach the Doha agreement with this Pakistan-nurtured politico-military outfit in February 2020, and the reason why the Biden administration is being openly solicitous of the group which continues to rain violence on the Afghan people.

In the American scheme, half of all official positions will go to the Taliban in the envisaged interim government. Not to put too fine a point on it, the logic of things suggests that so long as the last US soldier exits unharmed, it will matter little to Washington if the Taliban (with Pakistan’s and China’s support this time) seeks to bludgeon the country into submission yet again.

Disregarding the promises it had given the US of a negotiated peace with the Afghan government, as a condition for the final withdrawal of American troops under the Doha agreement, the Taliban went on a spree of violence, killing thousands in the course of the past year, along with targeted assassinations.

This was to project its military prowess to strengthen its negotiating stance vis-a-vis fellow Afghans and to suitably impress the Americans further.  And yet, astonishingly, Mr Blinken’s letter to President Ghani speaks of a “revised proposal” for a 90-day “reduction in violence” -- not “ceasefire” -- to pre-empt the Taliban’s “spring offensive”, an annual feature, presumably so that peace parleys (to aid the US) are not prejudiced.

The question to ask is whether the Doha accord survives as an instrument of any merit after a year of bloody Taliban violence. If not, are there lessons in this for the future? But uninterested, the US is headed for “Bonn 2”, probably on March 27. Besides, with the participation of the US, Russia, China and Pakistan, and invitations to senior Afghan figures, including government leaders, an earlier “peace” conference is due on March 18, hosted by Moscow. There is unseemly hurry.

Negotiated settlement or not, a May 1 withdrawal agreed by the former US President is not off the table. On the first anniversary of the Doha accord, the Taliban threatened that “any attempt against the agreement” will end in “failure of talks”. The thought must terrify the Americans. Equally, Afghan national security adviser Hamdullah Mohib has said that Kabul was against “imposing” the Doha accord on the people. Completely split perspectives.

Afghanistan is said to be the graveyard of empires, but it is also proving to be the breeding ground of ironies. Trophies are sought to be handed out to the most violent.