Despite Modi’s triumph, no Congress-mukt India yet

One factor that worked in favour of the BJP in these elections was the popularity and image of Prime Minister Narendra Modi. 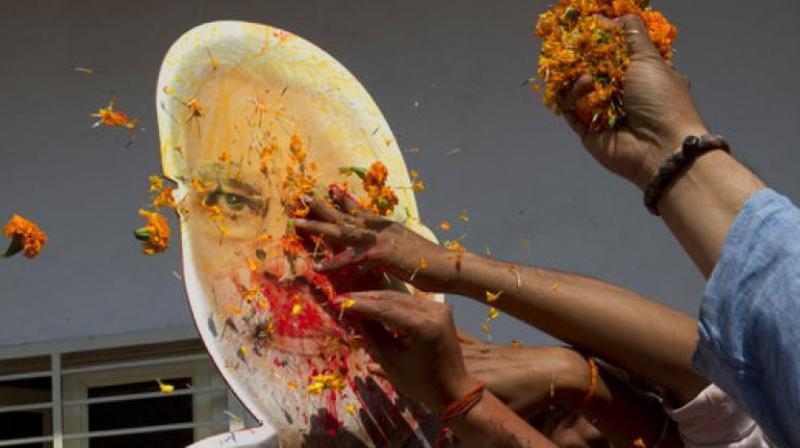 Bharatiya Janata Party supporters toss flowers on the cutout of Indian Prime Minister Narendra Modi as they celebrate winning seats in the state of Uttar Pradesh in Lucknow. (Photo: AP)

After the results of the recently-concluded Assembly elections in five states, several questions are being asked. Is this verdict an indication of approval of the policy of demonetisation? Should these results be interpreted as an endorsement of the policies pursued by the Narendra Modi government? More political questions are also being asked — Is the country moving towards a “Congress-mukt Bharat”? Is this an end to the Aam Aadmi Party’s national expansion ambitions?

The BJP’s massive victory in Uttar Pradesh and Uttarakhand clearly indicates that the people did not object to the policy of demonetisation. However, it would be too early to conclude that the note ban got widespread approval across the five states where the elections were held.

An unconditional approval of the policy of demonetisation should have helped the BJP to win by a large margin in Goa and, at least, being able to increase its voteshare in Punjab. It did manage to make its presence felt in Manipur in a big way, getting the largest share of the popular vote, but it may not be attributed to voters’ support for demonetisation.

One factor that worked in favour of the BJP in these elections was the popularity and image of Prime Minister Narendra Modi, the enormous goodwill he commands and tremendous faith that the people have in him for development of the country. In fact, after demonetisation, one important image which Mr Modi has been able to add to these qualities is his commitment to work for the poor even at the cost of the rich, who are seen as corrupt and dishonest.

Along with his image of being honest and his commitment for development, this new addition appealed to voters in five states. The policy of demonetisation indirectly helped the BJP in consolidating support though this new pro-poor brand of Mr Modi.

The issues that were being raised by the BJP clearly indicate that the party was not trying to contest these elections on the basis of its achievements at the Centre. The elections were largely contested on local issues. This doesn’t mean these results in any way indicate a rejection of policies of the Central government. But one should not forget such a victory of the BJP in Uttar Pradesh is also credited to a cleverly crafted social coalition of upper castes, non-Yadav OBC and non-Jatav dalits who seemed to have voted for the party in large numbers, while it also attracted votes from other communities.

In Goa, though the party actually won fewer seats than the Congress, it was ahead of the Congress in terms of voteshare (BJP 32.5 per cent Congress 28.4 per cent). In Manipur, a state where the BJP had no presence in the 2012 elections, it managed to not only win 21 of the 60 Assembly seats, but left behind the Congress with regard to the popular vote (BJP 36.3 per cent, Congress 35.1 per cent).

In Uttar Pradesh, the Congress had been lying low. It made an attempt to revive itself by aligning with the Samajwadi Party, but failed miserably. They Congress lost Uttarakhand badly, but managed to win comfortably in Punjab.

In Manipur, while the BJP’s performance was exceptional, the Congress, which failed to form a government for the fourth term, still managed to hold on to 15 years of anti-incumbency by emerging as the single-largest party in terms of seats.

Similarly, in Goa, while the BJP secured a higher voteshare vis-à- vis the Congress, in terms of seats, the Congress emerged as the single-largest party with 17 seats, the highest number of seats it has received in Goa after 1999. Though the Congress did not perform well in these elections, the overall situation of the Congress did not deteriorate further, and based on the verdict of the five states one can argue that there hasn’t been any further movement on the BJP’s pipedream of a “Congress-mukt Bharat”.

The AAP managed to perform much below its expectations, but by no means can its achievements be ignored. The party managed to win 20 Assembly seats, and emerged as the principal Opposition in the Punjab Assembly. The AAP managed to garner sizeable support, polled 24 per cent votes. For any new party this is a decent performance, it looks poor only if one compares it with the tall claims which several leaders of the party made time and again during the elections of not only winning but sweeping the polls in Punjab. The results of the Punjab Assembly elections could act as a dampener but it doesn’t put a full stop to the AAP’s plans to expand beyond Delhi. I think it is time for the leaders of the party to realise that a successful national expansion is possible only through hard work, and not merely by rhetoric.