To be sure the city of Delhi — a cossetted child of emperors starting with the Great Mughals — is spoilt silly. 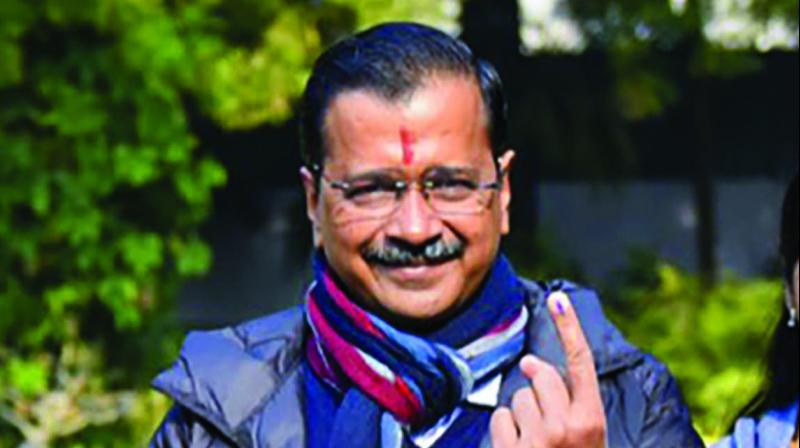 On top of the BJP’s rudderless leadership to get the national economy out of a rut, or very possibly because of it, comes a humiliating political defeat in the Delhi Assembly elections with Arvind Kejriwal’s broom sweeping the Congress completely out of the capital’s politics and limiting the BJP to single digits in the 70-member Delhi Assembly.

The dynamic Gujarati Narendra Modi-Amit Shah duo who rule India from Delhi must be feeling the pinch of the thumbs-down they got from 54 per cent of 10 million Delhiites (out of 15 million) potential voters who cast their votes on February 8.

Coming as it does, despite desperate efforts to play divisive politics — the signature, winning political tune perfected since L.K. Advani’s 1990 rathyatra to build a Ram Mandir — surely points to the need for a considerable rethink, especially now as Ram Lalla rests easy in Ayodhya.

Admittedly, Delhi is an outlier. It ties with Goa for the highest per capita income in the country; has high literacy levels and is a grab bag of domestic high achievers attracted to the capital by the opportunities offered — ranging from abundant well-paid, low skilled daily work to highly overpaid, top echelon professionals and savvy business folk.

Performance counts in Delhi. On that parameter, the BJP has little to show while the AAP merely points to the “positive lived experience” of Delhi citizens in public services — electricity, water, the management of sewage, education and health services.

The BJP rules at the municipality level, but it has nothing much to show for it. More important, land management and the police, which are under the lieutenant-governor and through him the Union government, have remained pools of public dissatisfaction and discontent, with none of the spiffy governance anticipated when Narendra Modi became Prime minister in 2014.

To be sure the city of Delhi — a cossetted child of emperors starting with the Great Mughals — is spoilt silly. It expects the earth from those who rule without cooperating in the least to give something back to the city. But it is an international and a national bellwether purely because of its strategic location at the political and economic crossroads of domestic and global matters.

If the BJP is to recover from the series of recent body blows — Rajasthan, Jharkhand and now Delhi — some directional changes are needed over the next four years till 2024.

First, the BJP has retained around 39 per cent of the votes cast. But reliance on the “Modi magic” to get past the post without a second line of credible and competent North Indian leaders has cost it heavily.

Delhi is used to a long line of emperors who conquer and then choose to settle down here and adopt it as their own. The BJP has anticipated this need now by appointing J.P. Nadda as party president — a Himachali born and brought up in Bihar. But this is little more than a palliative in the face of an absent layer of high ranking North Indian leaders — beyond Rajnath Singh — in key Cabinet positions.

Second, the abnormal delay in firing on all three engines — private consumption, public investment and exports — is felt keenly in Delhi where new projects, high consumption and exports drive the economy. The Budget for 2021 failed to provide the lift so eagerly awaited by urban India — jobs, cheaper loans and incentives for investment.

The Reserve Bank has erred in not bringing the repo rate below the psychological five per cent level. The initiative to free investment loans for specified purposes from the CRR requirement are welcome, but too timid. Between the Statutory Liquidity Ratio and Cash Reserve Ratio (CRR), 22.25 per cent of a bank’s assets are compulsorily sequestered in low-return government debt, which earns barely two percentage points more than the cost of bank term deposit rates. The State Bank of India has reduced its deposit rates now to lower its cost of funds. Sadly, no thought was spared for the hapless lower middle class for whom a bank deposit is also a saving instrument.

For profits, banks look to private lending at usurious rates ranging between nine (house loan) to 15 per cent (car or commercial loan). This is far too high to encourage spending unless accompanied by high inflation to deflate the real interest rate to a bearable 1.5 per cent per annum — which has not been the case since 2015.

Pulling the plug on fiscal restraint was the only way to go. But Arun Jaitley’s legacy of “fiscal propriety” — as defined by the Washington Consensus — still rules like a staid aunt.

Third, L.K. Advani’s rathyatra gambit seems to have come to its end. Divide and rule makes sense only if you retain a core group of supporters who stand to benefit from you. This group has rapidly shrunk. Industry and business — once the rally boys of the BJP — now look a worried lot as Delhi acquires undertones of imperious Beijing. Indian entrepreneurs are… well Indian, in their rambunctiousness. They dislike too much restraint, unless it is aimed at their competitors.

The governance style emerging out of Delhi is far too authoritarian to assuage the average businessperson long used to a laidback, wink-wink, nod-nod, non-competitive environment. This explains the overtures made recently by the government to raise tariff walls for the import of a range of goods.

Expect many more similar actions to reach out to the core base of the BJP — Hindu voters from the upper and middle castes in the belt stretching from Rajasthan to Bihar across north and central India, with a focus on urban and peri-urban areas. Dalits, rural India and contested territories in the South and East are likely to be reduced to collateral political reserves to be accessed on a transactional basis when beneficial.

This does not augur well in the immediate future for strategic fiscal reforms in inter-state governance — devolution, decentralisation and enhanced federalism or for structural reforms in labour, land management and agriculture.

Consequently, growth will remain sluggish till the financial sector outgrows the drag of its stressed assets; public debt levels may breach prudential levels and government allocations are likely to become even more skewed to benefit specific interest groups — like big farmers — as the BJP gears up for state elections in predominantly agricultural Bihar in October this year, and later in Uttar Pradesh in February 2022.