It’s vendetta in Dhaka. India must not meddle

India has chosen not to react publicly to the developments in Bangladesh. 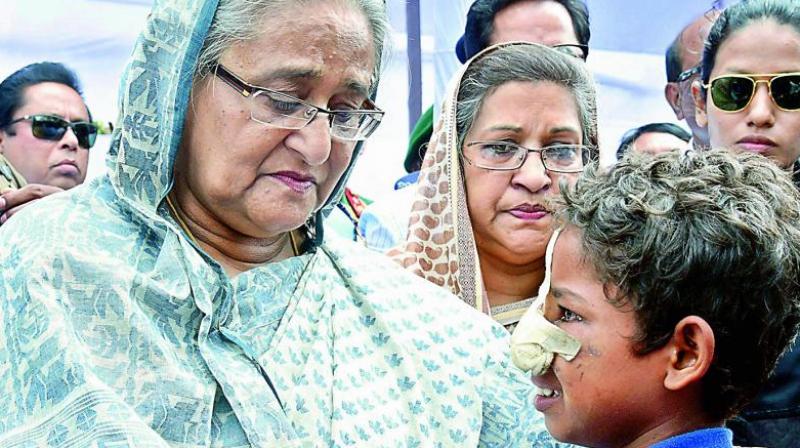 The general election in Bangladesh is due in December this year and the leader of the main Opposition, the Bangladesh Nationalist Party (BNP), former Prime Minister Begum Khaleda Zia, has been jailed for five years on corruption charges. Unless this conviction is overturned, the BNP may be forced to go into the election without her at the helm.

India has chosen not to react publicly to the developments in Bangladesh. This is likely to be interpreted as continuing support for Sheikh Hasina’s Awami League government.

India tacitly supported the one-sided general election of 2014 which was boycotted by the BNP. More than 50 per cent of the seats in that election (154 out of 300) were won uncontested. With a mere 22 per cent polling, that election was legitimised by India’s backing.

Under Sheikh Hasina, much has been achieved in India-Bangladesh ties which could not be accomplished in the BNP’s tenure. Hoping to continue the uptick in bilateral relations, New Delhi may be tempted to go along with the legal machinations of the Awami League to grab the coming general election. If it gives in, India would be making the same mistake — backing a particular party or leader — that has caused it so much grief in Nepal and in the Maldives.

The allegations against Begum Khaleda Zia date back to 1991 and the case itself was filed 18 years late. The trial has been hastened to ensure a conviction virtually on the eve of the general election in order to disqualify her from contesting.

In 1991, the Emir of Kuwait made a donation of $1,255,000 (Taka 4.5 crores) to set up an orphanage in the name of late President Zia-ur Rehman after his assassination. The grant came in the name of “Prime Minister’s Orphanage Fund”, while no such fund existed in the Prime Minister’s Office. In 1993, the Kuwaiti grant (including the interest accrued) was split equally and Taka 2.33 crores each was credited to two newly-created private trusts — the “Zia Orphanage Trust” in Bogra and the “Zia Memorial Orphanage Trust” in Bagerhat. The first was set up by Zia’s sons Tarique Rahman and Arafat Rahman, and the second by a former BNP foreign minister, Mustafizur Rahman. No documentary evidence has been produced to show that Begum Khaleda Zia had any role in setting up these trusts. The money lies unspent till today due to the continuous litigation and is now estimated to be over Taka 6 crores.

Begum Zia, her son Tarique and four others have been convicted in the Zia Orphanage Trust case involving the measly sum of Taka 2.33 crores. While the legal issues will have to be settled by Bangladeshi legal experts, the political significance of the case is undoubted.

The cases were instituted by the Army-backed caretaker government which held power in 2006-2008. It was working on the so-called “Minus Two” formula to oust both former Prime Ministers — Begum Zia and Sheikh Hasina — from public life. Corruption cases were launched against both — four against the former and 15 against the latter.

The cases against Sheikh Hasina were dropped for being politically motivated when she assumed power in 2009. However, those against Begum Zia remained and new ones were instituted, adding up to 36. Since then, 78,000 cases have been filed against an astounding 800,000 BNP leaders and cadres across the country. The political nature of the lawsuits is quite apparent.

The conviction of Begum Zia may have several objectives. It could serve to provoke the BNP to keep out of the elections or split it or at any rate ensure that the party goes to the polls without its star campaigner.

It is already clear that the BNP will not boycott the polls. By declaring Tarique Rahman as acting chairman of the party, the BNP seems to be preparing for the worst case scenario in which Begum Zia is denied bail.

As of now it may seem advantage Sheikh Hasina. Her credibility is high internationally because of her sheltering nearly 700,000 Rohingya refugees who poured into Bangladesh after August 25, 2017. The country has also witnessed unprecedented development under her rule — economic growth is expected to be consistent at above seven per cent, consumption and income levels have risen and the average annual growth in the Human Development Index has been the best in South Asia.

Yet there is considerable disquiet among the people about increasing executive control of the judiciary (the last Chief Justice of the Supreme Court was chased out of the country on trumped-up charges of corruption), the increasing reliance on the security forces — specially the Rapid Action Battalion (RAB) — for governance, the state’s stranglehold over the media, the threat to civil society and free speech as well as the enforced disappearances of dissidents. In a free and fair election, therefore, the outcome may be uncertain.

India is more than happy with the Awami League government and may like to see it return to power. Indian apprehensions about the BNP arise from its past record of going against Indian interests and the suspicion of Pakistan’s influence on the party and its ally, the Jamaat-e-Islami. This alliance is also seen as worryingly ideological by India despite the BNP’s protestations that it is only an electoral arrangement.

Some Bangladeshis, therefore, believe that India will be comfortable if a hobbled BNP participates in the election. Sheikh Hasina would then likely come back to power with greater legitimacy.

Such a surmise may be incorrect. It is unlikely that India would contribute to a distortion of the political process in Bangladesh yet again. It can ill-afford to support the Awami League’s machinations as in 2014 without inviting international criticism and turning the Bangladeshi people hostile. India may, therefore, desist from any overt or covert interference. If its advice is sought, India should aim to promote only such actions which will strengthen the integrity of the democratic process and allow the people’s will — whichever way it goes — to manifest itself in a free and fair manner.