Preparing for the Assembly race

The BJP believes this will predictably create confusion among the SP cadre and the voters and work to its advantage. 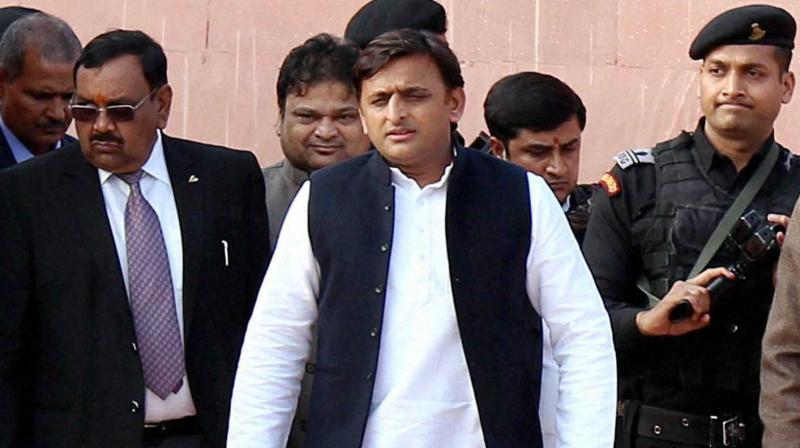 The tussle in the Yadav family over the ownership of the Samajwadi Party’s election symbol — bicycle — is being followed closely by the other political players having a stake in the coming Uttar Pradesh Assembly polls. According to the capital’s political grapevine, the ruling Bharatiya Janata Party is working behind-the-scenes to see that the Election Commission allots the bicycle symbol to the Samajwadi Party’s ageing patriarch Mulayam Singh Yadav and not to his son and Uttar Pradesh chief minister Akhilesh Yadav. This will mean that the more popular SP leader — Akhilesh — will be forced to contest the election on a new symbol. The BJP believes this will predictably create confusion among the SP cadre and the voters and work to its advantage. The BJP is hoping that disillusioned with this infighting, the Yadavs, which constitute the main support base of the SP, will opt for the saffron party while the minority vote, which has been committed to Mulayam Singh Yadav till now, will get divided. On the other hand, the Congress is equally keen on knowing how the internal feud in the SP will be resolved as its talks of an electoral alliance with Akhilesh Yadav depends on its outcome. In fact, Congress vice-president Rahul Gandhi cancelled an official trip to China because the partnership could not be sealed due to the prolonged internal battle in the Yadav clan.

When senior Congress leaders met recently to decide the candidates for the forthcoming Assembly polls in Uttarakhand, chief minister Harish Rawat insisted that the sitting MLA from Nainital be dropped and the ticket be given to the son of his ministerial colleague Yashpal Arya. This surprised Congress leaders since it is a well-known fact that the chief minister is not on friendly terms with Mr Arya. Nevertheless, Mr Rawat argued that Mr Arya’s son was a winning candidate as the incumbent lawmaker has become highly unpopular. It subsequently transpired that the chief minister was making a case for Mr Arya’s son as this would make it easier for him to push for a ticket for his own daughter from Hardwar. Realising that the Congress has laid down a “one family, one ticket” rule because of the criticism it faces for giving preference to sons and daughters of party leaders, Mr Rawat was essentially making sure that his colleagues did not raise any objections when his daughter’s case is taken up for consideration. In fact, Mr Rawat made a oblique reference to the hard work being put in by his daughter in Hardwar at the meeting of party leaders but was quick to deny that he was seeking a ticket for her. The problem is that Mr Rawat is under pressure from his second wife who is insisting that he should ensure a ticket for their daughter. At the same time, his two sons (from his first wife) are also keen on contesting elections that has made life difficult for Mr Rawat.

Given the sycophantic nature of Congress leaders, it is not surprising that they tend to make lengthy speeches at any party programme as they believe they have the ear of the party leader. Most speeches are peppered with lavish praises of Congress leaders. It was no different at the day-long party convention organised at Delhi’s Talkatora Stadium last week to unveil the next phase of the Congress campaign against demonetisation. True to form, the speakers lauded party vice-president Rahul Gandhi but surprisingly, very few made any reference to Sonia Gandhi who had chosen to stay away from the programme to send out a clear message to the party rank and file that the Nehru-Gandhi scion is in command now. With the exception of a few leaders like Ahmed Patel and Selja Kumari, who made it a point to mention Sonia Gandhi in their speeches, the others spoke of serving under “Rahulji’s leadership”. Anybody following the proceedings would have been easily led to believe the party has almost forgotten Sonia Gandhi.

Cadres belonging to coalition partners — the BJP and the Shiromani Akali Dal — may be at loggerheads in Punjab but PM Narendra Modi holds Punjab chief minister and Akali leader Parkash Singh Badal in high esteem. When Mr Modi unveiled his dalit agenda at a recent Cabinet meeting and urged his ministerial colleagues to take personal interest in its implementation, he made a special reference to the work done by the Badal government in this respect. Mr Modi even went as far to suggest that Central ministers should visit Punjab to get a first-hand account of how the various schemes and programmes for the dalits had been implemented there. With the dalits accounting for nearly one-third of Punjab’s population, the Badal government has gone all out to woo them with an eye on the coming Assembly election. From opening special coaching centres for scheduled castes students studying for the civil services examination and sprucing up Valmiki-dominated villages to organising a Bhagwan Valmiki Ji Darshan Yatra, the Badal government has left no stone unturned to win over the dalits. It is to be seen if this effort will pay off on polling day next month.