The last time these four democratic countries had entered into a huddle and conducted joint naval exercises was in 2007. 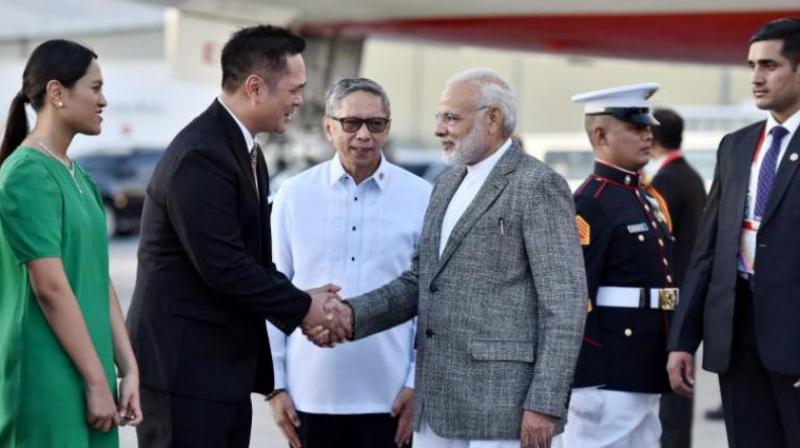 Prime Minister Narendra Modi being welcomed on his arrival in Manila to attend the ASEAN.

The relaunch of the “Quad-rilateral” dip-lomatic formation involving India, the United States, Japan and Australia on the sidelines of the Asean and East Asia Sum-mits in Manila is a significant development that promises to put flesh on the bones of the term “Indo-Pacific” and shape a free and secure Asia.

The last time these four democratic countries had entered into a huddle and conducted joint naval exercises was in 2007. It was too fleeting to have a strategic impact. China objected to the “ganging up” against it and the participants soon dropped the ball.

Had the Quad sustained and institutionalised itself from 2007 by meeting regularly to coordinate foreign and defence policies with the shared aim of a non-hegemonic Asia, we would not now be staring with fear at the 800-pound gorilla called China. China’s ascent as a superpower is driven not only by its economic dynamism and military modernisation but also by the fact that there has not been a proper multinational coalition with a vision to check its expansionist tendencies.

By dividing Indo-Pacific countries against each other through one-on-one manoeuv-ring and deal-making, as well as keeping the United States tied up in a contradictory “engage and hedge” mode vis-à-vis China, Beijing has climbed up unconstrained.

China’s favoured mode of bilateralism, as opposed to multilateralism, owes to its realisation that it lacks the goodwill and trust across Asia to sew up a multinational alliance. Instead of focusing on building a countervailing coalition under its leadership against the US or any future opponent from within Asia, China has promoted a segmented region and ensured that collective entities like Asean stay fragmented and unable to formulate joint foreign and defence policies that could pose obstacles to Chinese domination.

Nurturing “weak link” nations like Cambodia, Laos, Myanmar and the Philippines to deny consensus within Asean, and cultivating South Korea to obstruct the possibility of all American treaty allies merging their bricks and mortars into a mighty wall of containment has been part of China’s grand strategy.

Periodically, there are reorientations among these weak links. Since its quasi-democratic opening, Myanmar has not been as faithful a Chinese minion as it used to be. But the Philippines under President Rodrigo Duterte has moved away from the US and towards China. Malaysia, Vietnam and Thailand — three formerly independent or pro-Western countries — have also bowed to the reality of an unstoppable China and adjusted to avoid angering or targeting Beijing.

In Northeast Asia, South Korea has reve-rsed its earlier hardline stance against China. Seoul recently patched up with Beijing in a pact wherein the latter ends its economic boycott of the last couple of years regarding the deploying of an American anti-missile shield, while the former desists from entering into any triangular military alliance with Japan and the US. The ironic situation created by this flip in Seoul is that China has greater leverage with America’s treaty ally South Korea than with Beijing’s long-time ally North Korea.

These weak links are not part of one grand multilateral coalition under China’s banner. But by virtue of their specific respective arrangements with China, they have kept the path free for Beijing in the South China Sea disputes and in breaching the “first island chain” and “second island chain” structures which the US designed during the Cold War era to contain Communist China’s outward push. To use a metaphor from track and field athletics, the road facing China is a smooth 1,000-metre course rather than a steeplechase.

It is in this context that the second reincarnation of the Quadrilateral has potential to upset Beijing’s untrammeled marathon to become numero uno in Asia. Although India, Japan and Australia are individually inferior to China in military and economic might, by pooling their resources and having the United States in tow, they stand a reasonable chance of reifying the notion of the “Indo-Pacific”. By its very etymology, “Indo-Pacific” implies an enhanced role for India in China’s backyard. It offers scope for democratic powers to cooperate through military interoperability and construction of connectivity corridors that are not authoritarian and non-transparent like Beijing’s One Belt One Road (OBOR) initiative.

Imagine a Southeast and Northeast Asia where China is not the only game in town because there is a coalition of the willing of four democracies that have a sizeable common infrastructure fund and naval forces of their own. It would increase options for the weak link nations and reduce the sway that China has over them.

The flurry of summit diplomacy of the past one week involving all the players of the region and the US has brought to the fore China’s discomfort with mainstreaming of the phrase “Indo-Pacific”. Beijing prefers the old “Asia-Pacific” and has conveyed to Washington in crafty language that it belongs as much to China as to the United States.

President Xi Jinping’s remark to President Donald Trump that “the Asia-Pacific is large enough to embrace China and the US” and that these two are going to be the “key influence countries in the Asia-Pacific” are meant to snuff out the nascent Quad and its Indo-Pacific dreams.

Will Mr Trump fall for it and concede to China’s rise as an equal of the US in Asia and the world? Beijing is betting that the US under Donald Trump, who lacks a big geopolitical outlook, is the ultimate weak link which will not seriously implement the Quad idea. Plus, there is Australia — a country which is economically so dependent on China that its strategic clarity in confronting Chinese hegemony is dubious. Beijing thus does have aces up its sleeve to negate the Quad and scatter it again.

But India, Japan, Australia and the United States must remember what British politician Lord Salisbury said in the late 19th century after the United Kingdom forfeited a chance to limit a rival mega-power: “Two such chances are not given to a nation.”