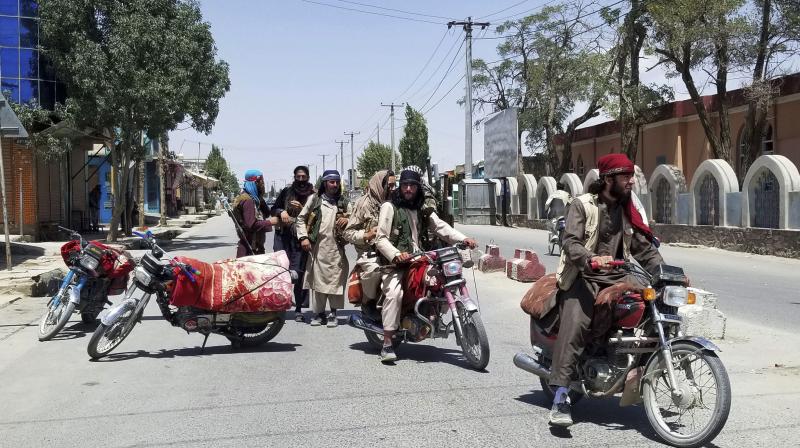 The world appears to be bracing for the possibility of new rulers in Kabul and thus examining the future and how to deal with them. American intelligence reports point to the likelihood of the fall of Kabul to the Taliban in about 90 days. What then will befall Afghanistan and the various stakeholders, with the Taliban’s return to rule Kabul?

This may sound hypothetical at this stage because the 350,000-strong Afghan National Defence Security Force (ANDSF), equipped and trained by the US and its allies, stands between the Taliban and its flag atop Kabul. It is not easy to defeat and vanquish a force of this size; Afghans aren’t exactly squeamish fighters and the ethnic makeup of the two opposing forces in conflict there is roughly the same. In contention is a US-equipped and trained government force that many say is not comfortable with conventional ways of conflict.

The other force is that of the Taliban, who are known to be the erstwhile young religious scholars of Islam with about 70,000 fighters supplemented by more from Pakistan. They gained prominence due to their passionate study of the Islamic faith in the various seminaries funded by Saudi Arabia set up on the western border of Pakistan with Afghanistan in the 1980s. Their ideological mindset was carved under Saudi-Pakistani tutelage over almost a decade at a time when Pakistan’s Deep State was gaining prominence.

Pakistan had decided to employ radical ideology as a means to cement its interests with those of different stakeholders against India; the Saudis had their own interests and strategy, looking to cultivate a region east of Shia Iran, with its own brand of Sunni ideology. Pakistan’s control of Afghanistan through the Taliban would effectively neutralise the Indian strategy to hem in Pakistan from the area which provided strategic depth to it. The ideological setup in the region promised to assist in actualising a proxy hybrid conflict inside Jammu and Kashmir. By 1996 the Taliban came to power in Afghanistan. With the nexus between Pakistan’s Deep State, the Taliban and obscurantist terror groups such as Al Qaeda, a potent mix was created. Gen. Zia-ul Haq’s strategy of using a mix of radical Islamist ideology, money and fighters appeared to work to Pakistan’s advantage.

Then Al Qaeda went and overstepped with 9/11, the attacks on America on September 11, 2001, and inviting the calamity of a US invasion, threats to bomb Pakistan back to the Stone Age and the eviction of the Taliban. Pakistan was forced to assist in the global war on terror against the very same elements it had created. Twenty years later it is probably salivating at the outcome of the current situation if it comes to a Taliban takeover. Only two contingencies are likely. First could be a compromise between the National Unity Government of President Abdul Ghani and the Taliban, negotiations for which are on even as the conflict goes on -- an unlikely contingency. With the reported Taliban military gains, the negotiations are only a means to gain some credibility for it. The second contingency is the swamping of the Afghan forces by the Taliban. The US seems to be anticipating this and is urging nationalist Afghan forces to fight hard for a victory. For the first time, the US leadership seems to be abandoning its interests, knowing fully well what the outcome may be. Is this a conscious US effort to embroil adversaries like China and Russia into the quagmire of the “graveyard of empires”; perhaps only time will tell.

Leaving everything aside, if the Taliban captured Kabul, it would do so after a bloody campaign with a Syria-like effect. Large-scale killings, destruction of cities and displacement of people -- some of whom would be forced to move out of Afghanistan while others will survive in abject conditions. The Taliban, which is gaining tremendous legitimacy by the fact that it is still negotiating in Doha and Tehran, and is in engagement with Islamabad, Beijing and Moscow, is unlikely to stick to any of the promises which signal a change of heart and functioning. Its attitude towards women is well known. Its virtual cold-blooded assassination of 22 Afghan Special Forces personnel in Dawlat Abad in Faryab province indicates that it will resort to mediaeval practices and have no respect for a rules-based society. The presence of the small US force and air power was sufficient deterrent for the Taliban and its sponsor Pakistan from trying to go over the top. The Doha engagement could have continued until the Taliban could prove its change of attitude and guarantees of this could be obtained from Pakistan. It just may have led to a compromise and governance of Afghanistan by consensus. However, President Joe Biden was in a tearing hurry, perhaps because he could not afford to see his administration overturning a potential situation for peace for the US initiated by his predecessor, Donald Trump. He probably also perceived that any policy creep would prevent the US from undertaking its next big mission, the “Pivot to the Indo Pacific” or “Rebalancing”, a legacy from the Obama presidency.

The urgency to develop the means and capability to prevent the rise of China does involve scaling down focus on the Middle East and Afghanistan, but as a superpower with worldwide gaze the US cannot afford to close shop in one area of intense interest to focus on another. In this respect, the wider ramifications of a Taliban takeover in Kabul haven’t been thought through by President Biden and his security and foreign policy teams. The Pakistan-Taliban nexus supported by stakeholders opposed to US (and Indian) interests could exploit this faulty conflict termination by the US. We need to remember that ISIS rose and thrived with the help of the vacuum left in Iraq by the conflict termination there. The effects of the Syrian civil war and the rise of ISIS actually created ripples of insecurity in Britain, West Europe, Germany and Turkey. The region of the New Great Game bears far more potential for turbulence and its spread could be unrestricted. India could be one of the worst affected although it is well geared up to absorb the travails of any developments there.

The Taliban may be coming but given the potential for trouble in the region and the propensity for that to have wider implications it is unlikely yet that the US is going anywhere near its intended new focus of redeployment.