Manish Tewari | As India is 74, pledge to perpetuate Constitution 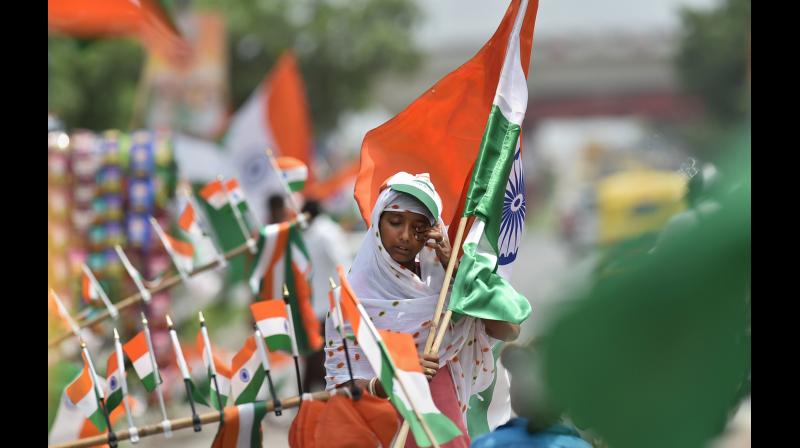 As India looks ahead to the 75 years of its existence as a democratic republic the one thing the people of our great nation must internalise is that eternal vigil is the price of liberty. Representational Image. (PTI)

As India enters the 75th year of its independence it is a good time to take stock of the journey till now and the challenges that lie ahead. It is still debatable as to when did India start getting colonised. Was it in 711-712 AD when the young Umayyad Arab general Mohammad-Bin-Qasim first invaded of Sind or was it in 1858 when the suzerainty of India stood formally transferred from the East India Company to the British Crown ?

From the 10th to the 18th century onwards, at least 70 invaders came down the Khyber to pillage India albeit facing the fiercest resistance from those who considered Bharat, Hindustan and later India as their homeland.

Be that as it may India finally attained Independence in 1947 and set about to create a modern nation out an ancient civilisation. Jawaharlal Nehru set the tone on the night of August 14, 1947, with his immortal tryst with destiny speech.
He said, “At the dawn of history, India started on her unending quest, and trackless centuries are filled with her striving and grandeur of her success and failures. Through good and ill fortune alike, she has never lost sight of that quest, forgotten the ideals which gave her strength. We end today a period of misfortunes and India discovers herself again. The achievement we celebrate today is but a step, an opening of opportunity to the greater triumphs and achievements that await us. Are we brave enough and wise enough to grasp this opportunity and accept the challenge of the future? Freedom and power bring responsibility. The responsibility rests upon this Assembly, a sovereign body representing the sovereign people of India. Before the birth of freedom, we have endured all the pains of labour and our hearts are heavy with the memory of this sorrow. Some of those pains continue even now. Nevertheless, the past is over and it is the future that beckons us now.”

The ambitions and aspirations of this new dawn did not require large and expansive constructions to articulate and announce the arrival of a new India. The written text could do it to just about perfection.

That is precisely why the visionary founding fathers of modern India did not first, in 1947, move to demolish and flatten Lutyens’ Delhi and erect grandiose structures to announce the dawn of liberation. Instead they chose to convene 300 of the finest minds, for almost three long years, to debate and dissect and freeze a new covenant of equality, fraternity and justice for all Indians — the Grundnorm of the nation — the Constitution of India.

Though amended 127 times in the past seven decades the Constitution has so far withstood all attempts by its stakeholders to fail it. However, its longevity rests on a sliver thin 7-6 majority of judicial craftsmanship by 13 judges of the Supreme Court in 1973. In Re: Kesvananda Bharati these 13 wise men by a whisker discovered a basic structure in the text of the Constitution that put the substantive parts of the Constitution  beyond the amending power of Parliament.

The beauty of that judicial pronouncement lies in its delicious ambiguity. No one is quite so certain what really are the ingredients of this basic structure. The generally accepted wisdom is that the sovereign, democratic and secular character of the polity, rule of law, independence of the judiciary, fundamental rights of citizens, etc., are some of the fundamental features of the Constitution. These cannot be “damaged”, “emasculated”, “destroyed”, “abrogated”, “changed” or “altered”.

However, the inviolability of the Constitution or even the First Republic that stood constituted on January 26, 1950, cannot be taken granted. A larger bench than 13 judges who sat to hear Kesavananda Bharati could well come to a conclusion that the amending power of Parliament was in fact unlimited as was provided in the 42nd Amendment to the Constitution before it was struck down in Re: Minerva Mills. An amending power that may have the right to even abrogate the Constitution in totality. It has recently happened with the Constitution of Jammu & Kashmir that lies in a state of suspended animation or total annihilation after the dismemberment of the erstwhile state of Jammu & Kashmir.

Other nations have gone a step further and even dissolved their republics and constituted fresh ones. France is the classical example where the fifth republic was brought into existence as recently as 1958 by a public referendum held on September 28, 1958. Closer home, Nepal has since 1948 adopted seven Constitutions, the current one being promulgated in 2015.

Given the fact that in the past seven years there has been a distinctive lurch towards right wing populism that has led to the emasculation of all autonomous institutions it could well be alluring for those who had reservations about the current Constitution at its inception and were rather emphatic in rejecting it to attempt something similarly harebrained as enunciated above.

However, the transient nature of Constitutions and republics is not the norm but an exception. The mother of all parliaments and democracies, Great Britain, functions without a written Constitution. However, its founding compact stretches all the way back to 1215 in antiquity — the Magna Carta. It laid down that “no man shall be arrested or imprisoned except by the judgement of their equals and by the law of the land. To no one will we sell, to no one deny or delay right or justice”. These immortal words written on a parchment became the founding principle of jurisprudence that many rulers and nations adopted in subsequent centuries.

Similarly, the Constitution of the United States of America adopted way back in 1789 has only been amended 27 times in its long march through the undulating sands of time.

As India looks ahead to the 75 years of its existence as a democratic republic the one thing the people of our great nation must internalise is that eternal vigil is the price of liberty. Our founding fathers have crafted for us a vision that has the ability, capacity and resilience to guide us during our journey ahead. Let us rededicate ourselves to protecting, preserving and perpetuating the Constitution of India.