What do pilgrimages mean in the time of climate change and the consequent rise in extreme weather events? 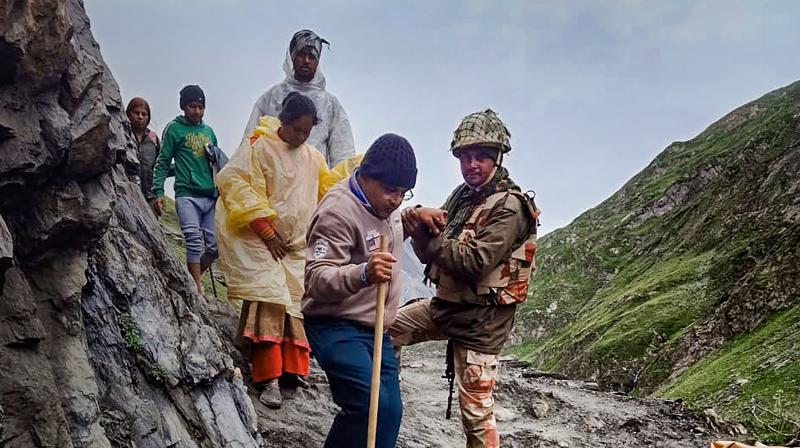 An Indo-Tibetan Border Police (ITBP) personnel helps pilgrims on their way to the holy cave shrine of Amarnath. (PTI Photo)

There is no full stop to the pilgrims’ progress. Undaunted by the tragedy, they have resumed their annual yatra towards the 3,880-metre-high Himalayan cave shrine of Amarnath from the Baltal route in central Kashmir’s Ganderbal district, just four days after flash floods triggered by a cloudburst claimed at least 16 lives and left several others injured. Many are still missing.

In another part of the world, devout Muslims on the Haj pilgrimage to Mecca, Saudi Arabia, had been braving rising temperatures and extreme desert heat in recent days.

Which brings us to an intensely topical question — what do pilgrimages mean in the time of climate change and the consequent rise in extreme weather events?

Clearly, faith is intersecting with the fury of landslides, intense rainfall, soaring temperature and more. MIT researchers say increases in heat and humidity fuelled by climate change could make the Haj pilgrimage extremely dangerous in the coming years. They say it may be necessary to severely limit the number of participants allowed to take part in the pilgrimage.

In the case of last week’s tragedy near the Amarnath shrine, a huge volume of water suddenly gushed through and swept away tents set up for pilgrims below the cave shrine.

The faithful remain undeterred even as they grieve. Officials say the disaster has failed to dent the spirit of the devotees at the yatra base camp in Jammu. “We have no fear in our hearts and minds. Whether there is a cloudburst or flash floods, we will go to Amarnath with the blessings of Bholenath…” pilgrim Surinder Singh from Kanpur told journalists. Meanwhile, climate change scientists tell us to factor in the unpredictable when it comes to weather.

It's high time we talked seriously about the carrying capacity of religious places, and the need for modifying the restrictions in the number of pilgrims allowed to visit holy sites, especially in difficult terrain.

What options do governments have? Are they going to focus on maximum safety or the maximum number when it comes to pilgrims?

Expanding on the theme, what about the necessary conversations on the carrying capacity of places which are not pilgrimage spots?

Coming specifically to the Amarnath Yatra, there is a report by the Nitish Sengupta Commission that is being referenced in the discussion around the tragedy.

Going through Lok Sabha debates, I came across this discussion in 2004 in Parliament. “In 1996, snowfall and avalanches caused large-scale damage to life and property, following which, the government set up the Nitish Sengupta Commission to inquire into the incidents. The Nitish Sengupta Commission recommended restricting yatris to 3,500 per day, including 700 yatris via the Baltal route for the 30-day yatra,” Shivraj Patil, then Union home minister, recalled. In 1996, 243 pilgrims died due to heavy rains while trekking to the holy cave shrine of Amarnath.

In subsequent years, during the Amarnath Yatra in 2000, 2001 and 2002, a number of violent incidents took place, Mr Patil noted. After the terrorist incidents, there was another recommendation to restrict the yatra’s duration in the fraught security environment to one month.

While security has been hugely beefed up for pilgrims, to what extent has the likelihood of unexpected extreme weather been factored in? In recent days, we have heard the country’s top meteorologists candidly admit the limitations of science in accurately predicting cloudbursts such as the one that led to last week’s tragedy.

Attempts are being made to improve safety. For the first time, each pilgrim on this year’s Amarnath Yatra was given a radio frequency identification device (RFID). The Army is using specialised mountain and avalanche rescue teams to look for missing pilgrims, and the RFID signals can be critical. However, according to media reports, officials say they ask the yatris to hang the RFID devices around their necks but most keep it in their bags or pockets, so data transmission is obstructed.

In a 2019 commentary piece, environmentalist Chandra Bhushan pushed for restrictions and “equality” when it came to visits to religious sites. This can be done, he argued, by allocating a significant number of permits to the economically weaker sections of the population and charging hefty fees from the wealthy, in order to manage the sites well.

Some see religious tourism as India’s soft power. But like everything else, it has to adapt to the reality of climate change. There have been far too many casualties over the years on many holy trails even in normal weather. Climate change just makes things even more dangerous.

Climate Trends, a New Delhi-based non-profit, says the “frequency of cloudburst events in the western Himalayan region has been on the continuous rise due to faster evaporation rates from glacial lakes at high altitudes, as a consequence of global warming”.

Science is already telling us that extreme rainfall is going to get even more intense and frequent. “Cloudburst could be more intense due to global warming,” says Climate Trends.

On July 28, 2021, there was a cloudburst at the same place. But the Amarnath Yatra was not on last year due to the Covid-19 pandemic, and therefore no life was lost.

Why have no lessons been learnt from July 2021?

Consider what the Niti Aayog, the government’s own think tank, had said some time ago. In its August 2018 Report of Working Group II Sustainable Tourism in the Indian Himalayan Region, the agency flags the need to “build in the concept of ‘destination carrying capacity’ for getting the balance right in the volume, timing and location of visits and for reducing congestion and ensuring socio-environment compliance”.

Organisations overseeing religious places need to factor in the basics of crowd management. Disaster experts have been stressing measures like situating pilgrim tents in places which are safe, frequent weather risk assessments, especially in mountainous regions where there can be sudden changes of weather, contingency plans, far better marking of emergency exit/escape routes and ensuring pilgrims are aware of them.

All of this can be done if the numbers are strictly controlled. But can it be done — even in ecologically fragile terrain — if the key objective is to ensure the highest-ever pilgrim footfalls? The obsession with setting footfall records is costing lives. This year, the Uttarakhand government has capped the daily number of pilgrims visiting the famous Himalayan shrines in the state, especially Gangotri, Yamunotri, Kedarnath and Badrinath during the Char Dham Yatra, but ecologists say the cap is far too high.

It is time to talk numbers and be safe rather than sorry.