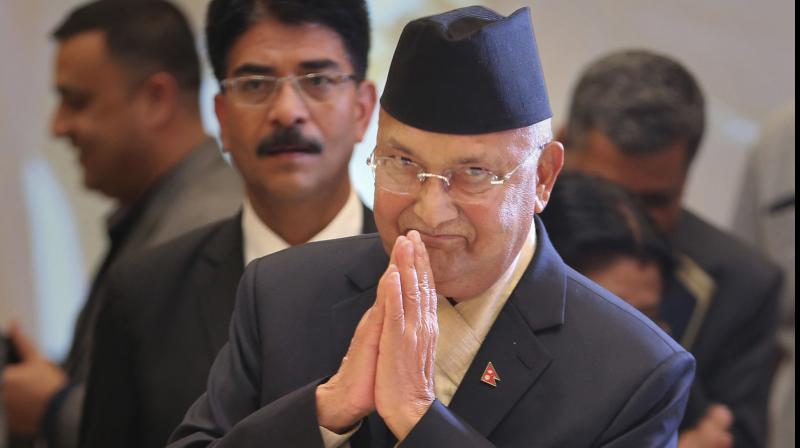 It would be short-sighted and counter-productive to attribute the reported stubbornness of Nepal’s Prime Minister K.P. Sharma Oli only to Sino-India quarrels.

India has had problems with Nepal long before there were any with China, and Nepalese sensitivity to geopolitical compulsions was reflected in the country’s description by its astute 18th century founder, Prithvi Narayan Shah, as “a yam between two boulders”.

Now, however, Mr Oli is cynically using India as the whipping boy in his rivalry with his Nepal Communist Party rivals, including Pushpa Kamal Dahal “Prachanda”, a former Prime Minister who is desperate to return to the gaddi. India cannot really expect stability to be restored until the battle is resolved, as it might be at the NCP’s July 17 meeting.

The unavoidable and inescapable central fact is that the two countries cannot do without each other. If Nepal needs India, India’s need for Nepal is just as great and cancels out the disadvantages inherent in the asymmetries of size, population and resources.

In fact, Nepal’s strength can be said to lie in its very weakness, making it a formidable power when it comes to bargaining.

Two further aspects of the situation deserve attention. First, much has been written about China’s ambassador to Nepal, Hou Yanqi, who is by all accounts astute, diplomatically dextrous, culturally versatile and personally popular.

These are enviable attributes and one wishes India’s envoys were similarly blest. Whereas a former Indian ambassador prostrated himself before Nepal’s then monarch whom he hailed as the incarnation of Vishnu, the 50-year-old Ms Hou charmed the Nepalese by dancing to a popular local song “If only I could fly like a bird under the wide open sky!” in a lehenga-choli ensemble when the Chinese embassy in Kathmandu celebrated International Women’s Day.

Second, Mr Oli’s allegations against New Delhi, the constitutional amendment and map to include Limpiadhura, Lipulek and Kalapani in Nepal, ban on all Indian news channels except Doordarshan, and  law obliging the Indian wives of Nepalese men to wait seven years before they can acquire their husbands’ citizenship all appear anti-Indian. But, truth to tell, he is no more anti-Indian than other Nepalese politicians.

Mr Prachanda also breathed fire and thunder against India at one time. Even Nepal’s first elected Prime Minister, the late B.P. Koirala, whom King Mahendra sacked, was extremely scathing about Indian motives and methods although he was regarded as an Indian protégé.

India is the football that almost all Nepalese politicians kick around. Sanjay Upadhya, a Nepalese journalist, captured their sense of being wronged in the title of his book, The Raj Lives: India in Nepal.

As the successor state, the Republic of India is not seen as operationally different from the British Raj. Nepalese grievances are many and the tragedy is that no important Indian spares much thought on them.

One of King Birendra’s leading officials told me, for instance, that although the 1950 India-Nepal treaty provides for consultation in times of threat, India had not ever discussed its China problems with the Nepalese.

Even then, Kathmandu saw Indian claims of a “special relationship” as a euphemism for a subordinate alliance. Bishnu Rijal, deputy chief of the NCP’s department of foreign affairs and a member of the party’s central committee, dismisses the “Roti Beti ka Rishta” link that defence minister Rajnath Singh invoked recently as irrelevant.

Both sides will still eat the same bread and seek spouses for their daughters in each other’s communities, but the Nepalese find it prudent not to talk about it.

Obviously, their reticence has something to do with keeping Beijing placated. “China is a bigger power now, while it was considered a sleeping dragon in the past,” is Mr Rijal’s frank admission, no doubt echoing popular Nepalese thinking.

“The dragon has woken up now.” He doesn’t regard China as “an aggressive country”. China merely looks after its own interests. “It believes in silent diplomacy.” He blames India by implication, describing as “unfortunate” the death of 20 Indian soldiers, “what happened between India and China” and the prevalent tension. “I hope it is resolved through dialogue. They should sit together and resolve the disputes.”

This bias is easily explained. Beijing sees Kathmandu as crucial to its massive transcontinental infrastructure Belt and Road Initiative that builds on the appealing legend of the ancient Silk Road that is said to have once connected China to the West.

The new venture involves political cooperation and economic integration and a consequent increase of Chinese influence. No wonder China is investing heavily in building airports, highways and hydropower projects in Nepal, as in many other countries that lie on the Belt and Road route.

As between China and the United States, India has been trapped in indecision. New Delhi backed the Shah dynasty, believing that a single king was more easily controlled than a bunch of contrary politicians. That was also the strategy in neighbouring Sikkim.

When Sikkim’s Chogyal (king) proved that he had a mind of his own, he had to go. India didn’t abolish Nepal’s monarchy. Whether or not China was involved, New Delhi has been wary ever since 2017 when a Communist government came to power. Again, Chinese involvement is denied, but who knows?

There is no quick or easy answer. But India must not allow any sense of rancour to affect its wholehearted support for relief in the flooding disaster that has struck Nepal, killing 23 people, and against the Covid-19 pandemic. Nor can India avoid formal talks on the border question.

Rigidity only plays into the hands of mischief-makers who are always ready to accuse India of bullying.