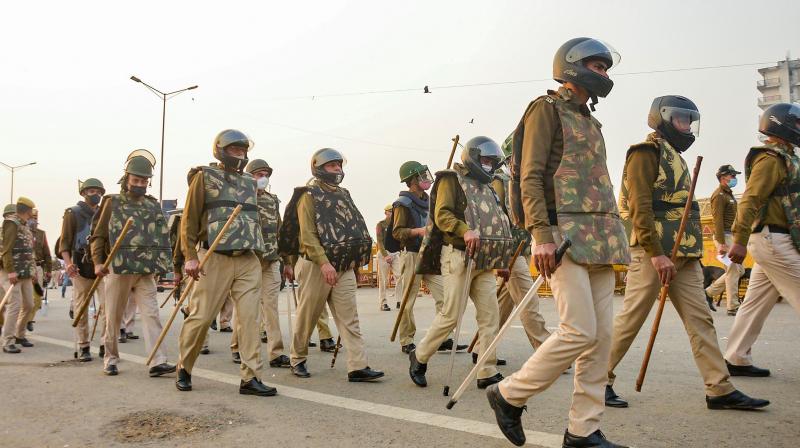 Besides the traditional internal security hotspots like Kashmir and the Northeast, we need to dwell briefly on other places where attention does not travel easily. (Photo:PTI)

With the run-up to the Assembly elections in five states underway and the external security environment being taken up by the dynamics of US-Russia-Europe, Afghanistan and Central Asia, the focus on India’s internal security in 2022 and immediately beyond has not received the full attention that it usually gets at the beginning of each year. It’s a phenomenon that is necessary to keep in sight because otherwise things have a nasty habit of appearing on the scene without any form of pre-warning — remember the agitations of 2020-21. We are passing through an era in which information is emerging as the main weapon to instigate the street. Our neighbours too have always fully understood that India’s strengths lie at its borders; so why only challenge it there? If they have to, they can do so deep within the nation where the fault lines and cleavages exist aplenty. Their strategy mostly is to embroil every region of the nation in turmoil through internecine differences triggered by rumour and information twists, with fractious politics becoming a weapon in itself.

Before looking at the traditional hotspots and their likely status in 2022 and beyond, it is important to understand a few facts about the coming period.

First, it may hopefully see the last of the Covid-19 pandemic waves and a return nearer to normal. Even while the economy improves, there are segments of society which have badly suffered; the unorganised sector in particular. Aspirations have taken a beating due to the Covid-19 pandemic.

All this has an adverse effect on the psyche of any society, especially one which has people living on the margins at most times. We cannot forget the caste-based agitation in Haryana in 2015. Crores of rupees worth of property was burnt down by angry mobs from deprived sections of society in just three days. Unpredictability in the internal environment can spell havoc.

With networks far easier to establish and communications faster and more reliable, instability spreads many times quicker. The second area of concern is that by the time the Assembly elections are over in March 2022, India will be entering the last two years’ phase of the government at the Centre. This is a period when jostling for political space begins, ethics start taking a backseat, political parties get bolder and risk-taking is of a higher order.

Divisiveness or combinations to garner regional strengths occur. The potential of some of these factors being exploited by external players is always live. It’s necessary to remember that agitation is the mode most used for grey zone attacks on the internal security of a nation.

Besides the traditional internal security hotspots like Kashmir and the Northeast, we need to dwell briefly on other places where attention does not travel easily. Southern India, largely peaceful and having more than its share of natural disasters through 2021, needs to remember that the networks of some radical outfits, financed and controlled externally, lie within some of the prominent states of the South. This became evident during the April 18, 2019 terror attacks in Sri Lanka, claimed by the ISIS. The footprint of terror financing and ideological radicalism lies in some of the larger cities of southern India, such as Bengaluru, Coimbatore and Chennai, not forgetting Hyderabad too. Communal instigation drives clandestine movements, which can be extremely dangerous.

Among the states of the Northeast, major issues exist in Nagaland and Manipur, where the re-triggering of insurgencies is always the intent of anti-national elements. Although the ceasefire holds with the Naga groups, including the Niki Sumi group of NSCN(K), there has been very little positive movement beyond the Framework Agreement of 2015. The ceasefire is for one year and will come up for renewal with the backdrop of AFSPA sensitivity.

The recent incident of mistaken identity killings in Mon district in Nagaland by a sub-unit of the Army has set back relations even with civil society.

AFSPA is now becoming a millstone and if it is removed or re-enacted for the Northeast region, it will trigger demands for Kashmir, where the proxy war situation is far more intense. While no major surge in violence or instability of other kinds is expected, sporadic violent acts will probably continue. It’s important to ensure that external players do not attempt to cultivate influence. The instability at the Line of Actual Control, for instance, should not result in China enhancing its stakes in proxy support here.

The Red Corridor has largely been stabilised although there exist pockets which need to be neutralised. The Naxalite leadership is not known to be as effective as in the past and the armed police forces have done well to establish their domination. The problem here is that of the proverbial big act which pushes back the graph, and that is something the political and security leadership has to guard against.

Punjab threatens to become a continuum of Kashmir. That is the intent of Pakistan, which now appears confident of handling J&K, Punjab and Afghanistan, all at once. Networks which probably exist from the past may attempt to revitalise. While fractious politics also play a role here, the external support includes but goes well beyond Pakistan to the west. The sub-region we need to be careful about is the Ravi belt, Gurdaspur to Samba, well known for the Pathankot airbase attack and a series of other attempts at infiltration seven to eight years ago.

Jammu and Kashmir appears to be under control from a security point of view, notwithstanding the number of terrorists killed in the numerous encounters towards the end of 2021 and the number of local youth recruited to terrorists’ ranks. It awaits political activity to resume, which will indicate how successful the efforts at integration have been. One should not expect any major change in thinking, although some serious efforts at outreach have been undertaken. These efforts will take a fair time to manifest and lack of early success should never disappoint pragmatists. Expect low-level violence with sporadic surges to take place. Big-ticket acts such as Pulwama are unlikely although Pakistan could be expected to take more risks now that the Chinese presence in Ladakh is more pronounced and Pakistan is also guiding the Chinese interests in Afghanistan.

The serious student of India’s internal security challenges should mainly be looking at the unfolding social dynamics, involving both the impact of the pandemic and the effect of the fractious political scene that can also offer opportunities for external forces to weaken India’s internal fabric.