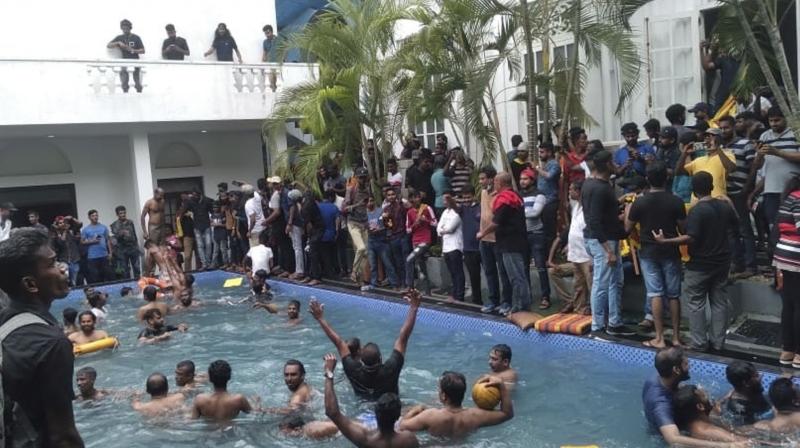 Anti government protesters swim in a swimmingpool of the Sri lankan president's official residence after storming into it in Colombo, Sri Lanka (AP)

The Sri Lankan crisis — in both the economic and political spheres — is the culmination of wrong policies and bad luck. Fate can ordain that it does not just rain, it pours.

The Rajapaksa clan, having won the civil war against the Liberation Tigers of Tamil Eelam led by Vellupillai Prabhakaran back in 2009, had two choices. One was to bury the past ghosts, seek reconciliation with the ethnic and religious minorities and forge ahead. Another was to ride the tide of triumphalism, nationalism and majoritarianism. They chose the latter, including a model that depended on the induction of multiple family members to hold critical positions in the government. They eventually lost power in 2015, but came riding back into power after the nation was shaken up by the Easter Sunday bombings in early 2019. Jingoism and bigotry were again saleable commodities and the clan specialised in marketing them.

The current crisis can be traced to two fatal decisions and two global events. The sudden ban on the import of chemical fertilisers in April 2021 rested on a sensible concept that organic farming would be remunerative and good for soil health and environmental protection. But it was implemented without warning, preparation or training. Much like the November 2016 demonetisation in India. The result was a sharp drop in the production of crops, including rice, a staple for common consumption. This turned a nation that was self-sufficient in food into a deficient one just as the government was already facing a foreign exchange crunch.

Second, the government raised taxes in May this year in order to boost its collapsing finances. This hit an already sputtering economy. By then the government was already in a hand-to-mouth state, having few resources to import fuel, food or medicines. India stepped in to assist with $3.5 billion worth of these three commodities.

The two global events that set the trap for Sri Lanka were the Covid-19 pandemic from early 2020 and the Ukraine war that began in February 2022. The disease affected the top three foreign exchange earners for Sri Lanka — workers’ remittances, apparel and tourism. The first were hit by the shutdowns in six Gulf nations. Even buzzing centres of commerce and tourism like Dubai saw a slump, leading to workers getting laid off. Strangely, in the UAE, Abu Dhabi, the richest emirate, put up barriers to keep non-residents from travelling to the capital of the nation.

Tourism, which constitutes 12 per cent of Sri Lanka’s GDP, was seriously hit as the pandemic froze all international travel. The situation has been worsened by the Ukraine war as tourists from Russia and Ukraine were among the top nationalities visiting Sri Lanka. Lay-offs in the West also affected apparel exports as people bought less during the pandemic, uncertain about their financial future.

The Ukraine war also seriously impacted not just Sri Lanka but the developing world in general. The escalation of oil and gas prices occurred due to the Western sanctions on Russia. Similarly, a spike in food prices followed due to wheat and other grains not being exported from a major supplier Ukraine. This twin challenge has led to government change in Pakistan, chaos in Lebanon, etc. But in Sri Lanka, the effect has been far more deadly as it combined with policy mistakes.

The Rajapaksa clan calculated that the popular anger would get defused by sacrificing Mahinda Rajapaksa, a former President now holding the less powerful post of PM. But with the economic malaise seeing no turnaround, the move only had a passing effect. An early play of what President Gotabaya Rajapaksa faced, with mobs invading his official residence in a manner reminiscent of the French Revolution, was witnessed when his brother Mahinda was chased out of the Prime Minister’s abode. The installation of Ranil Wickremesinghe as PM also had temporary impact as a quick solution to a complex scenario was not visible. In the process, he has lost credibility as he is seen as aligned with the Rajapaksa clan.

Constitutionally, that leaves Speaker Mahinda Yapa Abeywardena as the next in line of succession. He held an all-party meeting on Sunday to discuss the path forward. The Rajapaksa-controlled Sri Lanka Podujana Peramuna party holds 100 out of 255 seats in Parliament. The Leader of the Opposition is Sajith Premadasa, son of former President Ranasinghe Premadasa, who was in office 1989-93. He was a minister in the previous government of Maithripala Sirisena. He also unsuccessfully fought the last presidential election. The Speaker has a month to find a successor after incumbent President Gotabaya Rajapaksa resigns, as indicated on his behalf, on July 13. Obviously, the SLPP would try to get a surrogate elected. But if the Opposition joins hands, having read the public mood of despising the entire ruling class, someone like Mr Sirisena may be the choice.

Strategically, India has played its cards well. External affairs minister S. Jaishankar had served as a senior diplomat in Sri Lanka in the late 1980s, and in fact was political adviser to the IPKF when it was deployed in the island nation. He therefore knows the principal actors well. China has disappointed even their favourite Rajapaksa family by not doling out the funds needed to stabilise the economy. Perhaps they calculated that supporting the unpopular family would affect their long-term interests. India has done what it can during a financially rough global period. The US holds the keys to an IMF bailout, that is likely to come with tough, and not always sensible, conditions. Sri Lanka was never able to determine how to distribute power between Parliament and the two top offices of President and PM. The Rajapaksas have given a bad name to an all-powerful presidency. Outgoing PM Ranil Wickremesinghe proposed a rebalancing of power. That must now await the new leadership.

For India, a diminished Chinese role is welcome, though the curtailment may be transitory. The Rajapaksa-led government’s order forbidding the burial of Muslims who died of Covid-19, on doubtful medical grounds, now stands withdrawn with fuel and investment needed from Gulf nations. This lesson is similar to the one the Indian government drew after the Nupur Sharma episode. In an inter-connected world, bigotry can’t be just a domestic political strategy. It will have international implications. Surprisingly, two Buddhist nations, Sri Lanka and Myanmar, have produced toxic bigotry, endorsed by dominant parts of clergy. Both are seeing democracy undermined and civil disobedience rampant. Hopefully, Sri Lanka will find its path back to normalcy and constitutionalism.