Mohan Guruswamy | Liberty and rights for all: Myth of the Magna Carta 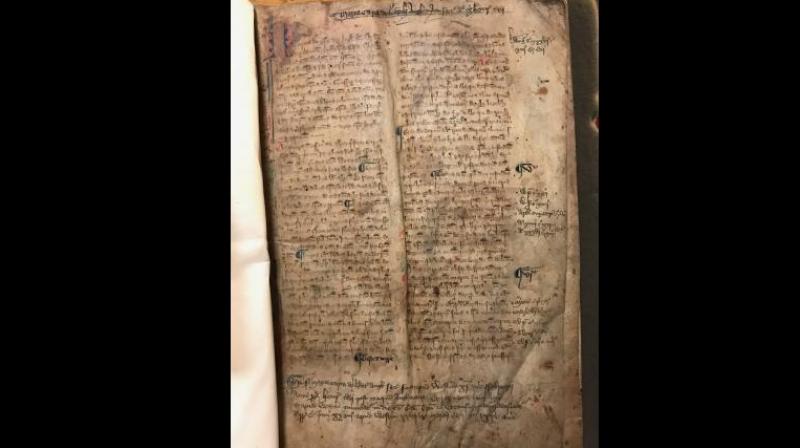 A 14c copy of Magna Carta in the MertonCollege library. (Twitter)

We now take our liberties and rights for granted, and the way of life it guarantees us as inherent. But what we now have has come after a long process of evolution, and many a time they flowed out of something else quite unintended. The Magna Carta is a case in point. In June, the entire English-speaking world celebrated the 806th anniversary of the Magna Carta, or Great Charter, that is synonymous with the fundamental rights and rule of law which are considered the cornerstones of modern democracy. Much of the world now believes that the Magna Carta came out of an eruption of a long-suppressed yearning among the common people for protection against the caprices of the monarch and the nobility. But it is not so.

It came out of an intra-elite struggle between 40 barons and their King. England’s King John had emptied the royal treasuries in a fruitless war with France, and the barons were no longer willing to meet his demands for higher taxes. The consequence was the Magna Carta to protect the barons from the King’s demands.

The demand to be judged by their peers was another protection. It was not meant for the ordinary people, but only for the barons. Thus, the Magna Carta was not quite a grand demand for equality, the basic freedoms and rule of law but just a narrow demand for restricting the ruler’s powers to ring fence the interests of the elite.

But the myth of the Magna Carta has endured, and it is often invoked whenever and wherever people struggled against injustice and freedom.

Mahatma Gandhi invoked it in South Africa when he fought for racial equality, and emancipators and freedom fighters like Nelson Mandela, Jawaharlal Nehru, Ho Chi Minh, Fidel Castro and Martin Luther King Jr have invoked it when they were being tried for sedition by oppressive rulers. Like those English barons, they too were arguing for limiting the oppressive and unjust powers of oppressive regimes, but now not just for themselves and their peers, but for all their fellow citizens. The story of modern democracy is about the long journey from the rights of a few to the rights of all.

Another myth that endures is that the twin notions of “democracy” and “the rule of law” somehow originated with the Magna Carta and its acceptance. The fact is that the King rejected the Magna Carta soon after it was presented to him. But King John avoided the consequences of the barons’ indignation by helpfully dying and thereby perpetuating the myth.

The first democracies long preceded the Magna Carta of 1215. Even as early as the sixth century BC, several “independent republics” existed in India as “sanghas” and “ganas”. The main characteristics of these sanghas and ganas were a raja, elected or hereditary, and a deliberative assembly. These assemblies met regularly and passed laws pertaining to finances, administration and justice. The raja and other officials obeyed the decisions of these assemblies. While these assemblies were mostly comprised of the nobility and landowners, in some cases they included all free men. But the Brahminical system prevailed in the sense that the monarch always had to be a Kshatriya. While the Licchavis, who held sway over the Kathmandu Valley in present-day Nepal and a major part of northern Bihar, were governed by an assembly of about 7,000 rajas who in turn were the heads of all the major families, others like the Shakyas, the clan to which Gautam Buddha belonged, had assemblies open to all people, rich or poor, and noble or common.

The greatest contribution to the evolution of democracy as a philosophy was in Athens, where great philosophers like Socrates, Plato and Aristotle lit up the public discourse with their brilliance and original thinking. Socrates and his pupil, Plato, deliberated and expounded on the role of a citizen within a community and laid down the foundations of the political philosophy that flourished in Athens and spread to most of the world over the next two and a half millennia. Aristotle, who counted among his students Alexander the Great, dwelt more on systems of government and who first qualified liberty as the fundamental principle of democracy.

This principle that “whatever is decided by the majority is sovereign” has always had to contend with the rights of the individual. In the United States of America, which was formed after a great debate among the founding fathers as a democracy, it was by majority will that slavery had flourished till the Civil War. It took another century before equal rights for black people became the majority will. This constant struggle for individual rights against the will of the collective has been the central story of the evolution of the modern democratic state.

Free India by contrast provided for all these rights and liberties from the beginning in its Constitution. The Magna Carta, because it sought to limit the powers of the ruler, perhaps still has a place in our hearts and minds, because of just that. To most of us citizens in democratic states, our life is also a constant struggle against the assertion of collective will to trample individual liberties or the rights of smaller groups.

The rise of democratic and elected parliaments in England and Scotland just 50 years after the Magna Carta is not a coincidence but the consequence of that demand to share power. It is from the Magna Carta that the English writ of habeas corpus evolved, safeguarding individuals and their freedoms against unjust and unlawful imprisonment with the right to appeal. It is from this emergence of petitions for the production of the body that parliaments in due course became to be increasingly used as a forum to address all the concerns and grievances of ordinary people.

Thus, whatever be the first intent of the Magna Carta, its consequences greatly expanded over the centuries into a charter, which guarantees individual liberties, equality and justice to all, irrespective of their race, religion and class. But that struggle is far from over. It goes on and only its forms change as human values and means change.