During his fortnight away, the PM left behind a real vacuum: who''ll do the press conference! 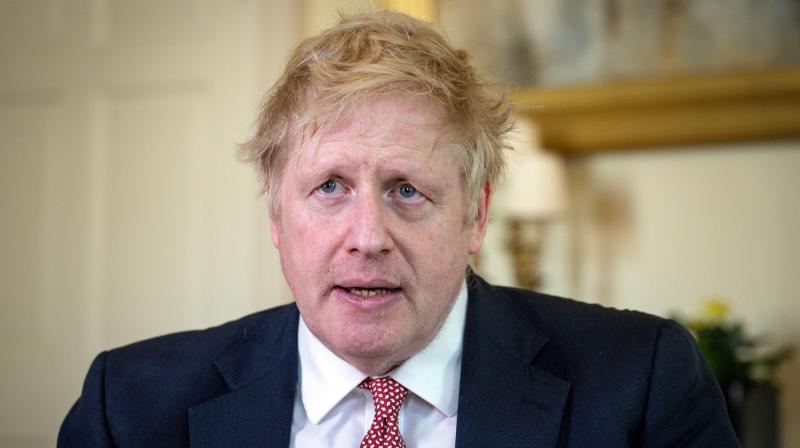 Handout image released by 10 Downing Street shows Britain's prime minister Boris Johnson as he delivers a television address after returning to 10 Downing Street after being discharged from St Thomas' Hospital, in central London on April 12, 2020. Johnson was discharged from hospital on Sunday, a week after being admitted for treatment for coronavirus and spending three days in intensive care. (AFP)

This should be called the ‘London Lockdown Diary’. We are in the Easter holiday weekend. Normally Londoners escape to the seaside or hills or even abroad as the Good Friday weekend stretches out. But now, even our local parks are deserted. Police are keeping a watch on parks and beaches to make sure we all stay at home.

The government has got serious. And this includes prime minister Boris Johnson who came up to the top of politics by being a jokey, relaxed chap, charming the girls, not to be trusted if you could help it, but loved by all. And last Sunday we had in sharp contrast to him, the one person whom everyone trusts, the Queen, who broadcast to an audience of 27 million viewers. She reminded people she had seen trouble before when she broadcast to the nation on radio in 1940. Eighty years ago! That put everything in perspective.

But then news came that Boris had caught the virus and was taken to St Thomas’s Hospital which is the local hospital for Parliament and Whitehall. He was placed in the ICU. And there were sad reports about his pregnant fiancee, Carrie Symonds, being distraught about it. This, along with the increasing number of deaths, brought home to the country that a casual attitude would not do. Boris who has been joking about shaking hands with everyone just a fortnight previously and comparing the diagram of the spread of the disease to a sombrero — and had boasted about flattening the sombrero — was now a victim himself. Luckily, he is now out of the ICU and in a general ward, with other patients. At a time like this, he would not like to occupy a room, or an ICU bed when people more sick than him need it. That’s the spirit, Boris!

With the prime minister away there was a real vacuum at the top. Boris’s absence at the daily press briefing at 5 pm meant that another minister had to chair it. There is no deputy prime minister designated, nor is there any provision anywhere in the (unwritten) Constitution as to how a prime minister can be replaced if one was to resign or die. Dominic Raab, who is foreign secretary, is technically ranked number two. But when he chaired the press conference, everyone said, “Come back, Boris, all is forgiven.”

So now ministers take turns. Rishi Sunak has proved very successful. He is also listened to because he has money to give away. On Wednesday he had his fourth chance to give away another £750 million to charities. Of course as soon as he announced it, everyone said it was not enough.

For all these days, only male ministers had presided over the press conference. People noticed and raised their voices. So come Saturday, we had Priti Patel giving a measured no-nonsense style performance which is her forte. We may end up seeing the entire cabinet for what it is worth.

One thing which has emerged is an immense appreciation of workers in the National Health Service. As it is while everyone loves the NHS — it never has enough resources. The coronavirus made it obvious that if the epidemic struck hard the NHS would run out of beds, nurses, medicines. Many retired nurses and doctors have come out to join the workforce. And of course people came to their doors and windows (as we were in lockdown) and banged tin cans, clapped and played whatever instrument they could to say “Thank you NHS”. Now that has become a regular weekly ceremony. For five minutes everyone comes out including soldiers stationed at home and abroad to say thank you.

The people are finding ingenious ways of amusing themselves while at home. Parents have had to take up teaching their children who are home and not at school. But for some families and couples the forced closeness has been stressful.

The virus has also forced many to take a reality check on how good their relationship is, and can it last? Cases of domestic violence have gone up, as have a few cases of murder.

The hardest hit, of course, are those who are unprepared for lockdowns, or are completely engaged in “external” activities, with groups.

The luckiest are writers, including my husband and me. We are used to imposing lockdowns upon ourselves. At one time, a few years back, I made myself “housebound” for up to six months , while writing a book. I only used to visit Sainsbury’s down the road when I needed to see a human face (apart from the family). Thus this lockdown has come at an opportune time as I am completing my biography of Devika Rani, the actress of the '30s and '40s, and, for a change, I will even be able to meet my deadline this month. At a time like this, I am grateful to have solid work to do — and it is a relief to be able to stay at home without having to make excuses to everyone who thinks you have suddenly become a snob. My husband is working on his new novel, and being an avid reader is surrounded by books ranging from politics to the Mahabharata. But of course, we cannot forget the heartbreak all around us. May the lockdowns help to make the coronavirus vanish!