Intolerance on campuses will breed violence

Its present agenda is to prevent any meeting or seminar that had invited persons opposed to the BJP line. 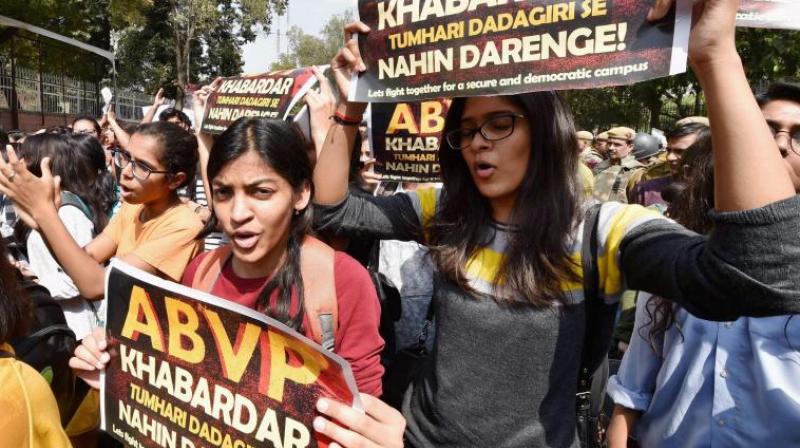 Students and teachers of Delhi University, JNU and Jamia during their protest march against ABVP at North Campus in New Delhi. (Photo: PTI)

The turmoil in the student world in India since January 2016 provides a grim warning of the dangers posed to democracy when students fall prey to extremist politics and resort to violence to silence dissent.

In January last year, dalit scholar Rohith Vemula committed suicide after he was suspended by the Hyderabad University. Najeeb Ahmed, a student at the Jawaharlal Nehru University, disappeared after clashes with persons from the Akhil Bharatiya Vidyarthi Parishad. Since most of the recent troubles are due to the ABVP’s kind of politics, one must know its background.

The ABVP was set up in July 1948 by Rashtriya Swayamsevak Sangh (RSS) activists to escape the ban imposed on it after Mahatma Gandhi’s assassination. Its founder, Balraj Madhok, was a rabid politician who became president of BJP ancestor Jan Sangh. Its aim was to combat leftist student groups.

It was involved in the 1951 communal riots in Jabalpur and in clashes with Shiv Sena in Mumbai. Its present agenda is to prevent any meeting or seminar that had invited persons opposed to the BJP line. Film screenings or demonstrations to express dissent from the RSS-BJP line meet the same fate. The technique is uniformly deployed — object to an event on the campus; ask the college authorities to ban it; failing that, ask BJP ministers to use their clout to arrest its foes and, meanwhile, create an incident to justify attacks on the organisers of the event by ABVP goons.

The ABVP won control over the Delhi University Students’ Union. Its general secretary Ankit Sangwar said on Februray 27: “If anyone raises a finger on [sic] this country that finger will be cut.” A day later the ABVP’s national media convenor Saket Bahuguna laid down the line: “It is anti-national if somebody demands freedom of Kashmir [from India]. This is misuse of freedom of speech.”

Both remarks were made in the context of the ABVP’s recourse to force at the Ramjas College, which is affiliated with the Delhi University, over two invitees to a seminar on February 22. They were JNU’s Umar Khalid and Shehla Rashid. Khalid faces a sedition case because of his views on Kashmir. A day earlier, ABVP men locked up the Delhi University’s seminar hall, pelted stones in protest at the invitation and called the organisers “anti-national”. The Ramjas College decided to cancel the event. The ABVP succeeded.

Its national organising secretary Sunil Ambekar said: “We will not allow a person, like Umar Khalid to speak on a campus.” But what place has this 49-year-old in a students’ body? A day later, ABVP members attacked a 5,000-strong march in protest at the seminar’s cancellation. The issue snowballed. Thousands of students and teachers marched through the Delhi University’s campus to protest against the ABVP’s “hooliganism” and drew support from opposition MPs.

This is not “student politics”. It is the extension of RSS politics to the student world. It portends grave trouble, for it puts a premium on the play of lumpen elements in public life. A brave 20-year-old student Gurmehar Kaur, daughter of an Indian Army officer who fell in the Kargil war, joined the campaign for free speech, but was obliged to withdraw after threats of rape and murder.

This is a body that plans to have a footprint in a hundred universities.

There are two aspects to the problem. One is ensuring freedom of speech on the university campus and banning of the practices which mar the working of political parties. Over a decade ago, the public was startled to find that at elections to student bodies money is spent almost as freely as in parliamentary polls.

The Supreme Court appointed a committee, headed by chief election James Lyngdoh. Predictably, his recommendations on elections to student bodies were unacceptable to the student community. For two decades, student politics were banned in Maharashtra following violence in Mumbai and Nagpur.

On March 1, 2017, the Maharashtra University Act 2015, went into force. It will revive elections on the campuses of universities in the state. What is needed is a statutory provision that guarantees freedom of speech in the university on the lines of Section 43(1) of the British Education Act 1986. It guaranteed freedom of speech to all members, teachers “and visiting speakers”.

But a wider, far more dangerous aspect cannot be tackled by legislation. It is the culture of intolerance and ready recourse to violence that has spread over the country and has also invaded university campuses. At the end it must be noted that politicians who practice violence in national politics are the very ones who use students as their instruments. The students fall in the trap — and end up aspiring to become politicians themselves.