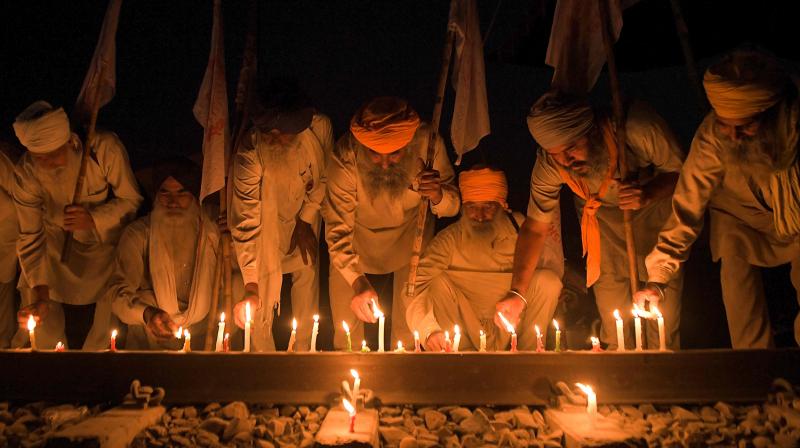 Farmers light candles in support of the Haryana farmers organisations as they announced to protests against three farm laws on the outskirts of Amritsar. — PTI photo

On the 27th of September, 2020, the President of India, Ram Nath Kovind, gave assent to the three farm bills, namely, The Farmers’ Produce Trade and Commerce (Promotion and Facilitation) Bill, 2020, The Farmers (Empowerment and Protection) Agreement of Price Assurance and Farm Services Bill, 2020, and The Essential Commodities (Amendment) Bill, 2020, thereby paving the way for their notification as law.

These acts unconstitutionally passed by the Rajya Sabha have created great trepidation among the agrarian communities, especially in Punjab, Haryana, Rajasthan and Western Uttar Pradesh, as also in various other parts of the country.

The first two bills are especially troublesome because they have been perceived as the first act in dismantling both the public procurement and the Minimum Support Price regimes. What gives further credence to these concerns is the fact that the debt burden of the Food Corporation of India (FCI) in the current fiscal has already crossed 3.15 lakh crores and the government has no plans of defraying the debt.

The FCI has barely any independent means of servicing this debt and if things continue as such FCI may just fold up. It would be pertinent to underscore that FCI is the principal instrumentality of the Union government for public procurement of agricultural produce in the country.

However, far more disconcerting than the economic imperative are the national security implications that have totally been ignored. It has the potential of destabilising the entire western border and creating conditions for the return of militancy to Punjab. However, to understand this properly, we must peep into the past.

The saga of Punjab has since times immemorial been impregnated with the creed of resisting of aggression and persecution. For 800 long years, from the 11th to 18th century, Punjab saw at least 70 invasions that left the frontier ethos of Indian subcontinent heavily militarised with a culture of  resisting exploitation and  zggression becoming the dominant social strain. It was better to die honorably than live in ignominy.

However, it was in the nineteenth century especially on the 10 of May 1857 that the 11th and 20th Bengal Native Infantry Regiments in conjunction with the 3rd Light Cavalry rose up against the British Raj. They murdered their European officers and moved towards Delhi that was captured by the sepoys of Meerut within 24 hours and Bahadur Shah Zafar II was proclaimed as the Emperor of Hindustan. This kickstarted the First War of Independence. After the British succeeded in putting down the uprising the British plan to demilitarise Punjab that was supposed to be implemented in the wake of the Anglo-Sikh Wars never really came to fruition.

In fact, they had to re-militarise it based upon the martial race theory that they
conceived. The martial race theory categorised the Dogras, Garhwalis, Gujjars, Gorkhas, Jats, Kumaonis, Pathans, Rajputs, Sikhs, Janjuas, Mahars, Kodavas, Gakhars, Ghumman, Khokhar and Yadavs as martial races. As a consequence, very heavy recruitment into the British Indian Army started taking place from undivided Punjab and the North West Frontier Province (NWFP) now in Pakistan from around the 1870.

Throughout World War 1, the British recruited heavily from Punjab. About half a million men were recruited from the province. According to certain historians, 50 per cent of these recruits were Punjabi Muslims, 36 per cent Hindus, 12 per cent Sikhs and one to two per cent Christians. However Sikhs were more in proportion than Punjabi Muslims when it came to people being recruited once they attained military age both at the cusp and again during the war. Moreover, during World War I, 75,000 acres of land on the Lower Bari Doab Canal alone was granted on peasant conditions to those who had distinguished themselves in the various battles of the Great War.

This process of recruitment exacerbated during the Second World War with the numbers from Punjab crossing a million. When the Second World War ended in 1945 most of the recruits were demobilised and came back to their respective villages. The Partition of India followed in 1947. The worst affected provinces were the Punjab and Bengal. More than a million innocents were slaughtered between July and September of 1947 in the Punjab alone. This was the direct consequence of dismembering a heavily militarised region without thinking through its implications.

Post 1947 agriculture, Armed Forces and immigration continued to be the main
occupations of the people of Indian Punjab. Over a period of time due to the institution of the Recruitable Male Population policy in 1966 the share of Punjab in the Armed Forces started dropping and as barriers to immigration became higher agriculture soon became the mainstay for the people of the state.

Incidentally even today Haryana, which has only 2.2 per cent of India’s population, contributes 7.82 per cent to the Armed Forces. Punjab with 2.4 per cent of the National population still contributes 16.6 per cent to the Armed Forces even though these numbers are a far cry from the pre-1966 days when both these states were a part of Joint Punjab formed post the merger of Patiala and the East Punjab States Union (PEPSU) and erstwhile British Punjab in 1956.

After the 1965 war the Minimum Support Price regime and public procurement were introduced in 1966-67 for wheat and later expanded to other commodities. This gave the Punjabi farmer an assured return on his produce. He could plan the future of his children assured of a safety net. The NDA/BJP government now wants to dismantle this social security architecture.

After the Green Revolution in 1974 the paddy and wheat cycle with public procurement and MSP as its two pillars brought prosperity to the Punjabi farmer. In 1982 when the Satluj Yamuna link canal (SYL) was sought to be constructed it had a very negative impact on the state for canal water is the mainstay of the agricultural economy.

It provided the trigger to a festering yet nascent militant movement that soon evolved into full-fledged terrorism consuming the lives of thousands of innocent citizens while allowing Pakistan to destabilise this sensitive border state for over a decade and a half. Those were the bloodiest years for the state post-Independence.

Even today Pakistan is hell bent on reviving militancy in Punjab. Weapon drops via drones and arrests of Pakistan-trained terrorists are regular occurrences.

Given this background how wise would it be from the national security perspective to dismantle both the public procurement and MSP regimes through these recent legislative enactments is a question that Prime Minister Modi must ask himself. Contrary to whatever the government may claim these laws have stoked the innermost fears of the people. The genie is out of the bottle. The NDA government has gone where angels fear to tread.