Massive floods following unexpected heavy rains leading to the loss of lives and destruction of property have become more common in recent years. 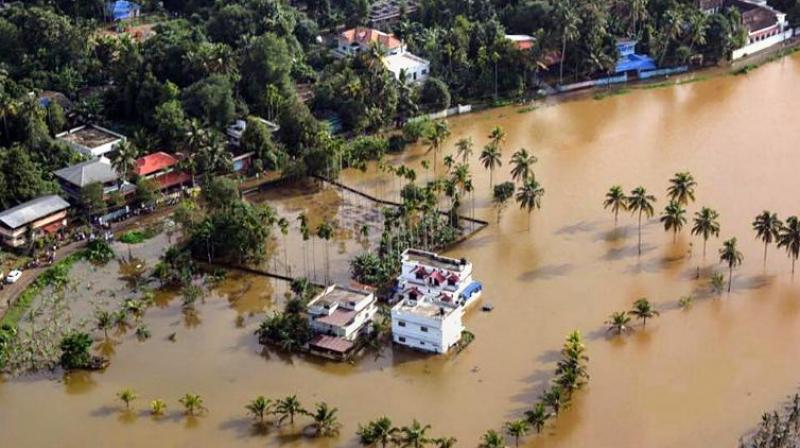 In Kerala, there are some 44 dams that store river waters. Not being forewarned about the unexpected heavy rains in mid-August, the dams were in danger of overflowing and suddenly released excess water. (Photo: PTI)

The year 2018 has been one of the worst for climate in the age of global warming. A fierce July saw monstrous wildfires, record heat and unprecedented flooding across the globe, fuelled by man-made climate change — and these extremes are only likely to become a fact of life. In heavy rains and floods this year hundreds of people were killed in Japan, India, Vietnam, Myanmar, Laos, the Philippines and Sudan, and even in the United States. In India the flood havoc was mainly in Kerala.

In Kerala heavy rains, over two and a half times the normal level for mid-August, caused rivers to overflow and water was simultaneously released from the overflowing dams. The flood was made worse by large infrastructure projects across the Ghats, including dams, power plants and buildings, and large-scale mining without reliable environmental-impact assessment reports.

The Inter-governmental Panel on Climate Change (IPCC) maintains that such intense floods, meant to occur once every 100 years or so, could now happen much more frequently. This is largely because when the atmosphere warms up it is able to carry much more moisture, leading to an unexpected deluge. The monsoon every year has its fair share of calamities, both floods and drought, but in the past decade or so this has increased substantially, happening more frequently. So much that the adage “once in a hundred years”, meaning a rare storm or drought, is no longer applicable.

Massive floods following unexpected heavy rains leading to the loss of lives and destruction of property have become more common in recent years. In 2015, large parts of Chennai and its neighbouring districts were flooded. In 2013, Uttarakhand suffered a massive loss of life when its mountain rivers became raging torrents that swept aside heavy dams and steel bridges, besides many hotels and homes. Earlier, in 2005, Mumbai had around 37 inches of rain, which drenched parts of the city in just a few hours, flooding many areas, including key highways, leaving people drowned or suffocated inside their cars, besides people killed in landslides.

Globally too there have been many storm disasters like the infamous hurricane that hit New Orleans in 2005, leading to many parts of the city being swept away by the floods. These were all meant to be disasters that would happen rarely, once in a hundred years, according to the norm, but their increasing frequency and ferocity means collective steps have to be taken, nationally and internationally, to get a grip on the problem. Contingency plans for every vulnerable area are vitally needed, especially to get affected people to safety and minimising the damage to their homes.

No one thinks the area they inhabit will be on the danger list until the disaster has already overtaken them. Environmental clearances and approvals have to begin all over the country taking into account rainfall and floods that would happen once a century. To meet the public resistance involved in the restrictions that will be imposed on construction, efforts would have to be made to convince people of their own long-term interest and to convince them of the expenses they would have to bear to control floods.

Each of the floods caused by heavy rain have had factors peculiar to them. In Kerala, there are some 44 dams that store river waters. Not being forewarned about the unexpected heavy rains in mid-August, the dams were in danger of overflowing and suddenly released excess water. This added to flooding, which would have been less severe if the water from dams had been released in smaller quantities earlier.

Due to the floods over a million people in Kerala have taken shelter in relief camps, or in the homes of others, and at least 463 people died. Some 46,000 hectares of agricultural land was laid waste in the floods and landslides. Over 10,000 houses and nearly a thousand kilometres of national and state highways got damaged. The cost of reconstruction was estimated to be over Rs 200 billion, of which the Central government only promised to disburse Rs 5 billion. The damage to human life would have been greater if fishermen from the state had not taken their boats into flooded towns and villages to rescue stranded people.

The floods in Chennai and its nearby districts in 2015 were more severe than those in Kerala, and the flooding in Chennai was the worst in a century when the city got 41.3 inches in November 2015. Over 500 people were killed and more than 1.8 million people were displaced. Estimates of the damage and losses ranged from nearly Rs 200 billion to over Rs 1 trillion, including housing for displaced people and rebuilding damaged roads, drains, water pipes and sewers.

A 2006 study by the Indian Institute of Tropical Meteorology (IITM) in Pune showed that extreme precipitation events had increased in frequency and intensity in India between 1950 to the 2000s, while according to the Centre for Science and the Environment (CSE), unprecedented floods in the Chennai region were the direct result of unregulated urbanisation.

The floods that ravaged Uttarakhand in 2013 were the most tragic, with the loss of life of over 6,000 people, mostly in the Kedarnath region. But the heavy rains that swept the district in June were the heaviest known there. The major tributaries — Bhagirathi, Alaknanda and Mandakini — that form the Ganga were swollen with heavy rain (the most in living memory) that made them deadly torrents which destroyed dams, bridges, houses and hotels along the riverbank, and killed hundreds of people. The many dams built there and four-lane highways to cater to religious tourism through the fragile mountain slopes led to the disaster. Moreover, rising temperatures in the Himalayan region have also led to greater rainfall.

With the world getting slowly warmer, not only will summers get hotter but the rains will get more intense, with shorter but heavier spells, and tragedies like Kerala or Chennai will only increase.