Hard-nosed reality ahead for PM Khan

A lie at the heart of Imran’s ascension to power and the smiting down of his predecessor has been that there is a crisis. 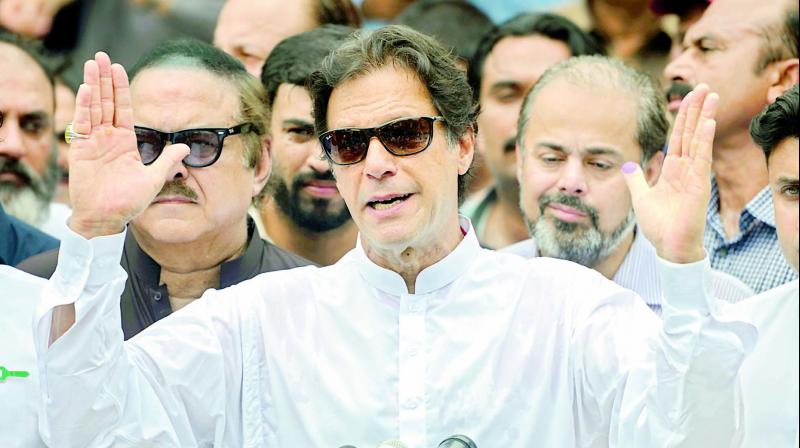 There have been three possible versions of Imran. One version is already dead, two possibilities remain — and together the three cover the spectrum from the dreamy to the hard-nosed to the sceptical.

Dreamy is already dead. Dreamy in the Khanista sense has never existed. Ours isn’t a polity of overthrow and revolution and the core of the Khan base is already a beneficiary of a two-tiered system: the somewhat-haves and the really have-nots.

The Khanista just wants to feel better about himself and this land of ours. But, from within the system that Imran has demonstrated he is more than willing to work in, there was a dreamy scenario.

In easy terms, in Opposition, Imran’s greatest promise was to force improvements in the status quo by using his political base as leverage.

You gotta do this — “this” being improvements in the anti-corruption regime, service delivery, whatever — because if you don’t you’ll be exposed as liars and frauds.

The PML(N) or the PPP before it would hardly have been eager to listen. Why change what’s already working for them?

But the dreamy scenario for Khan, and by extension the rest of us, could have been bolstered by two other changes already in place.

Wilful intransigence in the face of fierce political opposition can quite realistically erode political support and boost opponents.

The other part that has changed is the court’s willingness to get political. Local governments and the census, as everyone knows, only happened when they did because of the court’s intervention.

Put serious-minded political opposition together with specific demands and stack them on top of public disapproval of political inertia and the court’s activism — and you could have had some momentum for positive change.

Holding the others’ feet to the fire and, if that too failed, ascending to the most coveted of civilian offices, the PM-ship, with the winds of promise and hope at his back — the dreamy scenario. But Imran chose otherwise.

He hasn’t quite burned down the house yet, but he has set a couple of the rooms on fire and embarked on a project wracked by uncertainty. It could turn out to be a hard-nosed middle ground.

Hard-nosed reality is about reconciling political rhetoric with electoral and governance realities, and doing just enough to stay ahead of the chasing pack.

Imran has several advantages here. His compromises, as and when they come, aren’t such a big deal — he is the change, not the people he needs to rely on to assemble the necessary numbers.

But perhaps more important, Imran has a formidable PR machine available, partly built up by his party, partly loaned out to him by elements supportive of him. Hard-nosed reality is about incremental change backed by a vociferous, over-the-top PR machine.

Hard-nosed reality is about accepting marginal change and staying ahead of the chasing pack. So, who cares who Imran picks as CM, Speaker or anything else formulaically relevant to democratic delivery and success?

All Imran has to do is stay a smidgen ahead of the previous lot in terms of delivery, keep his PR machine amped up to maximum, and ride the crest of popular support to remaining a legitimate contender in the next election. Success. And if not success, the third option: why not Imran?

Why-not-Imran, the third original possibility and one of the two surviving options, is probably Imran’s greatest asset. A lie at the heart of Imran’s ascension to power and the smiting down of his predecessor has been that there is a crisis. A crisis that if not rectified will lead to untold disarray and damage. A crisis to unravel Pakistan.

It’s a lie. Not because there is no crisis, but because the crisis is familiar and the options to emerge from it are well known, more or less reasonably implementable and far from the now-or-never option it has been made out to be.

The PML(N)’s mismanagement of the economy has proved only one thing: between the PPP’s road to disaster and the N-League’s, there’s only a question of route, not degree. But what is this utter disaster exactly?

Back to handouts or bailouts that every government has managed and that Imran’s will too?

A horrible government is what Pakistanis have been programmed to accept, which has left, and may leave, Imran with the ultimate get-into-the-PM Office excuse:

Scepticism. What’s the worst he can do? Why not give him a chance? It’s not like the others have worked. But sceptical is dangerous. Between the dead option of dreamy and the extant option of scepticism, you have to wish for hard-nosed reality.