The meaning of job security becomes especially clear in a time like this. For crores of us around the globe, that security is gone 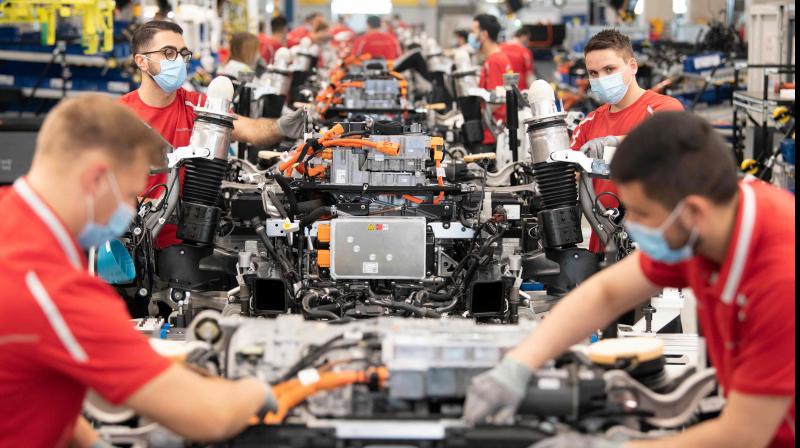 Employees of German car manufacturer Porsche wear face masks as they work on power trains for the Taycan full-electric sportscar at the production site in Stuttgart, southern Germany. AFP Photo

A few days ago, I had something delivered at home from the food delivery app Swiggy. It was someone's birthday and I ordered a kilo of cake.

The Swiggy app tells you that the order has been accepted and the name of the person assigned to deliver it to you. I usually see this so that if they call me to ask for directions, I can address them by name -- and I am generally curious.

This time, I was surprised to see that the name appeared to be that of a woman. Then I got a call asking if I wanted something written on the cake. This person was thoughtful and assumed that the cake might be for a special occasion. I thanked her and gave the name of the person.

A few minutes later, she arrived. I was near the gate because I wanted to meet her. She was on a Scooty, with another woman. She was not dressed in the delivery person's shirt, but in a salwar kurta. She was in her 30s. I asked if she was new to this and she said yes.

Two days after that, I was driving to my doctor when I noticed a woman pushing a handcart with fruit. Her movements in pushing were not practised and were rather strained. She was dressed as a housewife, with flowers, gold jewellery and a bright purple sari. Not the sort of clothes that a regular vendor might wear, but then we do not see many women vending. It seemed that she was new to this work.

On reaching my doctor's clinic, I was attended to by a physiotherapist who had mended my broken leg and back in the past.

He is from Odisha and quite good at what he does. He said that I was the first patient he had had since March 24 (this was on April 7). He had had no income since that day and compared himself to a daily wage worker, because he can only earn money when he tends to patients.

He said that someone he knew in Odisha, a famous stand-up comic, was doing delivery work since April.

The day before that, my wife spoke to someone at a restaurant, which is of course now shut. This person, who is a senior waiter there, told her that he was working these days as a delivery person.

He said he was bored at home, but of course another reason is also that salaries have been either halved or stopped. They have been slashed even in white collar places, where workers are better protected.

I see vendors of fruit and vegetables these days: Small vans with watermelons, carts with raw mangoes, guavas and bananas, with a small sign of the per kilo price.

All of these seem to have few, if any, customers. Though it is also true that without the usual Indian street traffic, the vendors seem to be more alone than at other times.

For crores of Indians today, there is no income. But rents and monthly instalments on loans need to be paid. Food and electricity are not expenses that one can forego and money must be produced constantly from somewhere for these.

This need is driving people to find work, and many of them, as with the two women referred to above, are working for a living for the first time in their lives.

For others, it is doing something different from what they were trained to do and experienced to do. Women must either supplement income because their partner is now unemployed or partially employed.

The vast majority of us are not technically qualified to do something other than what we studied (and many of us have not studied at all), so it is not possible for us to migrate to work that is highly paid. It must be physical work that requires not skill but effort.

And for those who cannot even get that, the only option is to vend or look for manual labour. This means that we are likely to see more people doing small vending businesses, as is already visible.

Perhaps, many will enjoy this line of work but it is fraught with uncertainty and even danger. Vendors face harassment, extortion, and new ones will have no knowledge of pricing, of neighbourhoods, how to dispose ripened fruit and so on.

There is a reason that the vast majority of us want to be employed. There is also a special phrase to explain it  -  job security.

The meaning of job security becomes especially clear in a time like this. For crores of us and hundreds of crores around the globe, that security is gone and now they must find a new way to feed themselves.