Farrukh Dhondy | My adventures with Oprah, the real queen of Yankeeland

Interviews with royals are like a virus plague, you don’t want to catch them, but you can’t avoid hearing all about them 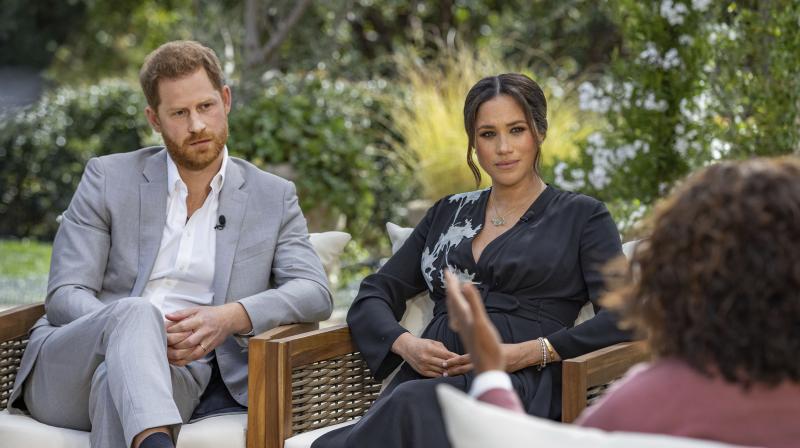 We take skin colourism as a nasty ingredient of our prejudices -- which we shouldn’t. (Photo: AP)

“Did the Lord God give us noses
For people to rub in our mistakes?
And did he grant us toeses
So we could stub them, for goodness sakes!

And yes, he gave us mouths
To eat, drink and not be ‘Loud’
And concealed bits and bobs --
Of which we are rightly proud.
From Kabhi Kabhi Merey Ghar Mey
Polees Aajaatha Hein by Bachchoo

Interviews with royals are like a virus plague, you don’t want to catch them, but you can’t avoid hearing all about them. The Queen of America, Oprah Winfrey, interviews Prince Harry and the Duchess of Sussex, the American actress Meghan Markle. I didn’t watch the interview, but bits of it were forced on me wherever I looked -- even intercut with news of the atrocities in Myanmar.

The most prominent pronouncement that this interview seemed to have yielded was Meghan’s claim that before her son Archie was born, some unnamed Brit royal wondered aloud, perhaps with some alarm or derision, how dark the baby’s skin would be. The remark, if Meghan reported it accurately and without malice towards the royals with whom she has fallen out, was prompted by the fact that Meghan’s mother is a “woman of colour” -- if that’s an accepted term. This was interpreted by Oprah and very many other people, including some panjandrums of the Commonwealth and several black US commentators, as a deeply racist concern. It can certainly be interpreted as such.

As Indians, gentle reader, we know that every grandmother and mother-in-law -- and yes, very many fathers-in-law -- have expressed the same anxiety. Their remarks haven’t resulted in flurries in the newspapers or flutters and ruptures in the constitution of the Commonwealth. We take skin colourism as a nasty ingredient of our prejudices -- which we shouldn’t.

Years ago when Princess Diana died with Dodi-al-Fayed in a car accident in Paris, his father claimed that they had been murdered because Diana was pregnant with Dodi’s child and the Duke of Edinburgh didn’t want the future King William to have a Muslim stepbrother or sister.

It’s highly probable that this Mohammed al-Fayed was unaware that in the fourteenth century Isabelle of Castile, a direct descendant of Princess Zaida of Seville, a woman of colour, who in turn was a descendant of the Prophet Muhammad himself, had married the Duke of York. From that Yorkist line, the present monarchy descends. So, Islam and Moorish skin colour are already somewhere in Archie’s DNA.

The only royal interview I confess to watching was Prince Andrew being quizzed by the relentless Emily Maitlis about his paedophilia and association with the frolics and crimes of Jeffrey Epstein. My mild curiosity wasn’t to do with royalty or how it would impact on the House of Windsor. I wondered if a British prince would face prosecution and jail and it was mildly amusing watching this idle icon of British tribalism sweat and squirm.

And now that poor Meghan, perhaps as a result of her “disclosures” in the Oprah interview, the victim in her own “confessions”, has signed a $100 million contract with Netflix, we can all cry in chorus for her as she painfully stumbles and staggers all the way to the bank.

But enough of her – let’s talk about me. I met Oprah or she met me when she was invited to a Channel 4 dinner and I worked there. It was a very select dinner and, I suppose, as the only editor of colour in the channel at the time, I was invited by our boss Michael Grade. We were served cocktails by uniformed barmen and then dinner in the boardroom by liveried waiters. No expense spared.

Oprah was seated at the head of the table with Michael and our beloved director of programmes, Liz Forgan. I was at the other end of the table and found myself sitting next to Oprah’s press secretary lady. We chatted through the first course and she said they had watched a riveting programme the previous evening in which a white South African eleven-year-old had exchanged places and families with a black South African lad of the same age. I had to say it was my idea and my programme. She was fascinated and asked what else I planned.

I said one of the areas I wanted to venture into was to examine Jazz and Soul as the classical music of America. She was curious, if not hooked.

“Which Soul and Jazz artists will you feature?”

“Depends on the thesis of the programme,” I said. “We are working on it.”

“Who are your favourites?”

“Today? I suppose Stevie Wonder and, by far the best for voice and technique belong, of course, to Aretha Franklin. Shame about her dress sense.”

The lady laughed and put her hand on her mouth as she did. Was this sacrilege?

Then she shouted across the room to Oprah and walked over to her at the other end of the table and the two of them came rushing over to me.

“You must tell her what you just said,” the press lady insisted, the amused shock still on her features.

Oprah pulled up a chair. I repeated my, perhaps injudicious, remark.
Oprah laughed. “I won’t say that’s so cheeky, but right on the ball,” she said -- or words to that effect. Our brief encounter didn’t hit the headlines. Netflix hasn’t offered me a cent.