How Modi won over Varanasi

Mr Modi made a conscious effort to reach out to all sections of society. 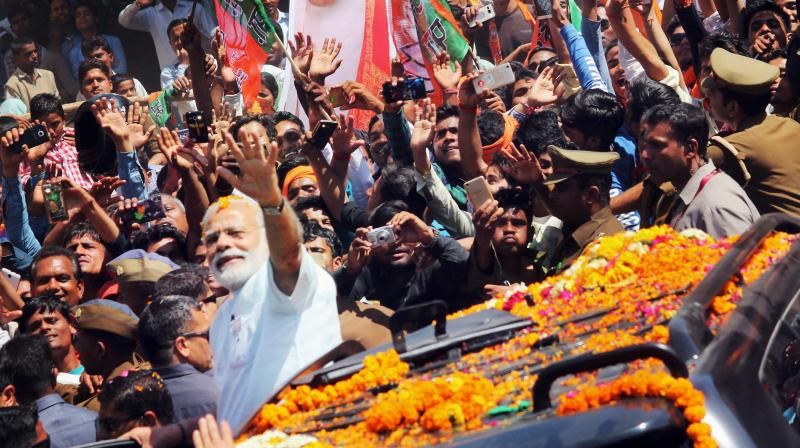 Prime Minister Narendra Modi’s fans in his Lok Sabha constituency Varanasi are at pains to tell visitors how Mr Modi won over the people of this ancient city by pressing all the right buttons. The Prime Minister, they explain, landed at the Banaras Hindu University when he came to file his nomination papers in 2014, paid obeisance to its founder Madan Mohan Malaviya, offered prayers at the famous Vishwanath temple and attended the evening aarti on the banks of river Ganga. All this, they said, appealed to the sensibilities of the people of Varanasi who are deeply rooted in Indian culture. Moreover, it is pointed out, Mr Modi made a conscious effort to reach out to all sections of society. For instance, when he spoke about how he planned to improve the infrastructure in Varanasi, Mr Modi had declared that he would make this city into another Kyoto. According to a BHU professor, Mr Modi chose to mention the Japanese city because there is a strong link between the people of Japan and Varanasi, specially the Mallah (boatmen) community. He explained that a large number of Japanese tourists visit Varanasi and, over the years, many of them have married boys from the Mallah community who are now settled in Japan. The Prime Minister, he said, could have referred to any other international city but he deliberately picked Kyoto precisely because of this connection between Japan and the people of Varanasi.

Speaking at a book release function a month ago, Bihar chief minister and Janata Dal (United) president Nitish Kumar made a strong case for greater Opposition unity at the national level. And yet this show of strength was missing in the recent Uttar Pradesh Assembly polls. Despite his talk of keeping communal forces at bay, Mr Kumar did not even turn up to campaign for the Samajwadi Party-Congress alliance or the Ajit-Singh-led Rashtriya Lok Dal even though his party had a pre-poll tieup with the party. According to the grapevine, Mr Kumar kept his distance from UP as he did not want to put himself out only to enhance SP leader Akhilesh Yadav’s image. Moreover, he is also learnt to have complained that Congress vice-president Rahul Gandhi did not invite him for the campaign. However, Mr Kumar’s ally in Bihar, Rashtriya Janata Dal chief Lalu Prasad Yadav, helped out by addressing a number of public rallies in the last two phases of the polls in areas bordering Bihar. In fact, Mr Kumar had forayed into UP shortly after his spectacular victory in the 2015 Bihar Assembly polls in the hope that he would be able to get a toehold in this important state by appealing to his fellow Kurmis. The move was seen as a sign that the Bihar chief minister was preparing to play a larger role in national politics. But Mr Kumar backed off shortly after he ventured out and has confined himself to Bihar since then.

Well before the month-long seven-phase UP Assembly poll came to a close, it became evident to the Samajwadi Party and the Congress that the results will not measure up to their expectations. It was at that stage then that poll strategist Prashant Kishor, drafted by Congress vice-president Rahul Gandhi, floated the idea that the two parties could tie up with the Mayawati-led Bahujan Samaj Party to keep the BJP out. It was also being whispered that since the BSP and the SP would not agree on a chief minister candidate from each other’s party, the top post could go to the Congress even though it is a marginal player in the state. No sooner did this story start doing the rounds that UP Congress chief Raj Babbar was seen consulting palmists and astrologers in Lucknow about his prospects for the chief minister’s kursi. As it happens, Mr Kishor’s grand plan was destined to be a non-starter.

Is veteran BJP leader L.K. Advani nursing ambitions of being picked for the President’s post later this year? Several BJP leaders have hinted at this possibility. A senior party insider recently remarked about how Mr Advani had succeeded in “capturing traits like anger, greed and jealousy”, it was not the case with ambition. It was pointed out that though Mr Advani did put aside his personal ambitions when Atal Behari Vajpayee was Prime Minister, these resurfaced subsequently, specially after he was projected as BJP’s prime ministerial candidate in 2009. Although Mr Advani and other older party leaders have been banished to the party’s non-functioning margdarshak mandal, his detractors maintain the BJP veteran has not accepted that he has been effectively marginalised by the Narendra Modi-Amit Shah duo that controls the party now. Mr Advani had hoped to get the Lok Sabha Speaker’s post when the BJP rode to power in 2014 and is now said to be keen on occupying the Rashtrapati Bhavan. But like last time, Mr Advani’s ambitions are expected to be thwarted once again.