For the Opposition to the BJP, the time has come to smell the coffee. 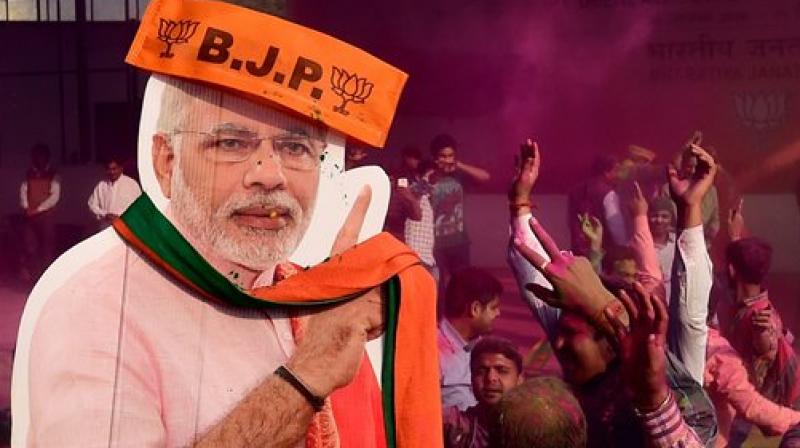 BJP workers play holi with a giant cut-out of Prime Minister Narendra Modi as they celebrate the party’s victory in the UP and Uttarakhand Assembly elections, at the party headquarters in New Delhi. (Photo: PTI)

The much-awaited results of the five states that went to the polls are out. And there are lessons to be learnt by all political parties.

First, the BJP, and specially Prime Minister Narendra Modi and party president Amit Shah, deserve wholehearted felicitations for their spectacular victory in Uttar Pradesh. Capitalising on a weak and divided Opposition, the BJP crafted a meticulously planned campaign, focusing specially in consolidating its support among upper castes, non-Yadav OBCs and non-Jatav dalits. The indefatigable energy displayed by Mr Modi was a crucial factor as well.

It would be a trifle euphoric, however, for the BJP to conclude that it is now the unassailable king of the ring. In partnership with the Shiromani Akali Dal (SAD), it has lost Punjab, where the Congress victory is definitive. In Goa, its incumbency has been successfully challenged. And in Manipur the elections are very close. Besides, as the elections in Bihar and Delhi have shown, a win, even in such an emphatic way at the national level as happened for the BJP in 2014, is no guarantee that victory will be sustained in every state. Much water will flow down the Yamuna before 2019. Elections are also due in Gujarat, Madhya Pradesh, Rajasthan and Chhattisgarh, and it has to be seen how much of its current vote percentage the BJP will be able to retain. While some degree of jubilation is in order, specially for the remarkable victories in UP and Uttarakhand, I don’t think it is time yet for complacency.

For the Opposition to the BJP, the time has come to smell the coffee. Unless the Opposition comes up with a credible narrative, and makes a sustained attempt at unity, based not upon hurriedly cobbled up and incomplete last-minute alliances, but organisational rigour, its impact will be sporadic. The Opposition needs to focus on a carefully worked out common programme with a clear-cut and convincing agenda for governance. It needs to eschew individual egos, and set the agenda, rather than merely being reactive.

Equally, it is important for the Opposition to understand that, in the BJP, specially under

Mr Modi, it has a formidable political adversary. Mr Modi has an unprecedented will to power; his eloquence is unmatched; his incumbency momentum is sustained by huge investments of personal energy. Through his personal efforts, and by the position he occupies, he is near ubiquitous — on radio, television, newspapers, and across the country. He has the support of a committed and well-organised cadre nurtured and trained by the RSS. Above all, his party has the Brahmastra, the ultimate weapon, of religious polarisation to divide voters for electoral gain.

The problem with the Opposition in general is that it habitually tends to live in denial. This is not to devalue the way in which strong regional leaders have been able to stop the BJP juggernaut in some states. However, each such victory is seen as a reason to believe that the BJP will be defeated nationally, but the truth is that unless individual leaders of stature in the Opposition come together on a larger national canvas, the BJP is slowly but definitely expanding its national footprint. The inability to understand this accounts for the fact that on several occasions, most notably Maharashtra and Assam, the BJP managed, as a result of Opposition disarray, to grab victory from the mouth of defeat.

Even in these five elections, while the Congress has achieved a creditable victory in Punjab, it must be remembered that it has done so on the back of a very strong anti-incumbency sentiment against the Akali-BJP government. In Goa its performance is encouraging, but it remains to be seen whether it can oust the ruling BJP. The BJP’s lead in Manipur represents a serious challenge to the traditional hold of the Congress in the Northeast. In Uttarakhand, the margin with which the BJP has wrested the state away from the Congress, with chief minister Harish Rawat losing both the seats from where he stood, is an unmitigated setback.

What then is the need of the hour? At a recent function in Delhi, Bihar chief minister Nitish Kumar publicly made the statement that the need of the hour is Opposition unity. For those who believe that the BJP’s current narrative, although successful in the short term in electoral terms, is harmful for the unity and cohesion of India in the long run, the first task is to stop merely speaking about Opposition unity and take concrete steps to achieve it. Perhaps some senior leaders in the Opposition need to urgently come together and form a core group that can meet institutionally on a regular basis to begin the arduous process of forging such unity. This effort needs to be rescued from last-minute expediencies, premature jostling for leadership, purely local considerations, and redeemed by a statesmanlike national vision.

In the immediate context, there are other important developments. The Aam Aadmi Party (AAP), which was expecting to win Punjab, has come a poor second. It has also been wiped out in Goa. What does this foretell for Arvind Kejriwal, and his party’s national ambitions? What will now happen with the Samajwadi Party? Will Akhilesh Yadav continue to hold sway, or will the old guard of his party hit back, leading to further friction in the Yadav parivar? And, above all, what will happen in the BJP after its remarkable victory in the key state of UP? Will the party, focused on Mr Modi and Amit Shah, now see the emergence of a high command like no other party has ever seen before? And further, will the voices of people like Yogi Adityanath, Vinay Katiyar and Sakshi Maharaj grow even louder, drowning out other saner counsels within the saffron party?