Bhupendra Patel had better deliver, or else! In an overturn, during the 2017 polls, the BJP tally shrank to 99 seats, while the Cong won 77 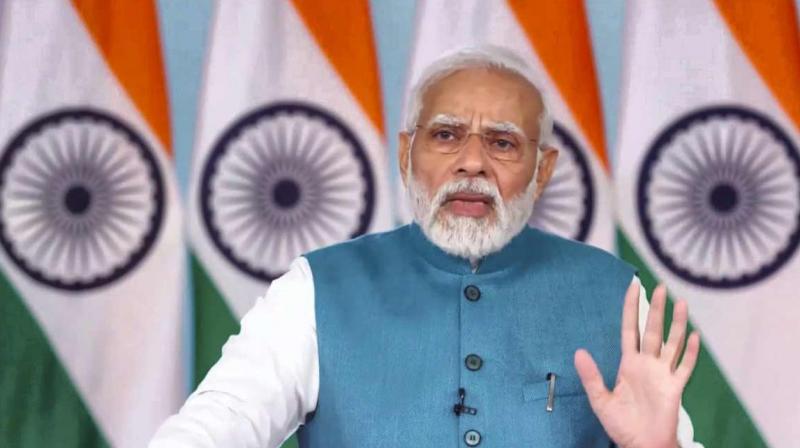 Mr Narendra Modi’s pitch in Himachal Pradesh emphasised the “kamal ka phool” when he told voters: “Every vote for the kamal ka phool will come directly to Modi’s account as a blessing…”. (Photo: PTI)

I returned from UP chief minister Yogi Adityanath’s turf (Lucknow) with memories of more than just “basket chaat” and tunde kebabs. The Lucknow menu this time featured several delicious nuggets and bite-sized tidbits, picked up in local bazars while I frantically searched for the perfect (read “well-priced”) chkaankaari anarkali. Janpath Market was abuzz with energetic shoppers hailing autos after enjoying Sharmaji ki Chai and papdi chaat at Royal Café. While waiting for our car, an auto driver stopped to ask where I was headed. Then he stared pointedly at my Janpath shopping bags, and sniffed derisively: “Yeh toh cheap shopping hai…” Yup. He said just that, figuring I was not worth his time.

Understandable. There are gigantic luxury malls every few kilometers in UP’s capital, and top-end stores have pushed off local brands in the Hazratganj area. Inevitable, given the overall prosperity one can see and sense. The locals say they’re happy, while extolling the amazing “vikaas”. The roads are superb, the city reasonably clean, and there’s new construction mushrooming all along the long route to the airport.  At the moment, UP’s diminutive CM is on the warpath… no, no, not against the 3.85 crore Muslims who live in India’s most populated state (one-sixth of the nation’s Muslim population lives in UP), but against a pesky mosquito. Dengue seems to be raging once again, and Yogi is hell bent on squashing the machcher -- he’s particularly adept at destroying machchers, locals boast. Given Yogi’s current popularity rating (“People are very happy here… free rations, bijli, paani… less corruption, computerised land records, more transparency, better accountability”); don’t be surprised if Yogi declares: “I made this Uttar Pradesh…” Why not? After all, his leader, India’s beloved PM Narendra Modi, has set the ball rolling during his 25-minute poll pitch in tribal-dominated Nana Pondha village (Valsad district) earlier this week by modestly announcing: “I have made this Gujarat”. The assembled crowd was made to repeatedly chant: “Aa Gujarat, mein banavyu chhe…”. He also warned that those who criticise and/or defame Gujarat would be “wiped out” from his home state. Just like wiping the slate clean, when one doesn’t like what’s written on it.

“Bhupendra (Patel) can break the record of Narendra”, he added, encouraging the crowd to cast their vote (in the two-phase Gujarat Assembly polls, on December 1 and 5) for the “kamal ka phool” -- nothing and no one else. Gujarat’s CM Bhupendra Patel had better deliver, or else! In a dramatic overturn, during the 2017 polls, the BJP tally shrank to 99 seats, while the Congress won 77. This was a huge comedown from the high in 2002, when the BJP bagged 127 out of a total of 182 seats. It’s the same Gujarat, and it’s still made by the same person(s).

Mr Narendra Modi’s pitch in Himachal Pradesh also emphasised the same “kamal ka phool” when he told voters: “Every vote for the kamal ka phool will come directly to Modi’s account as a blessing…”. Lots of blessings needed at this point, but the message is unambiguous: Forget the candidate. Vote for me. Clever. By stressing on the visual of the lotus and not the name of the candidate, the pitch makes sense to the vast number of illiterate voters, unable to read the candidate’s name, but quick to endorse a flower. Now, in fact, the lotus is everywhere – including in the G-20 logo!

I was so amused by the PM’s dialogues in Gujarat that I wanted to run around in my area boasting: “I have made this Cuffe Parade…” Or send a voice note to Uddhav Thackeray advising him to shout: “I have made this Maharashtra… my father has made this Maharashtra… my son will make this Maharashtra…”. All loyal Maharashtrians can also chant in Marathi: “Aapla Maharashtra mee banavley…” Our dynamic PM has started a new trend, yet again. I can hear this amazing “atma nirman” slogan being hijacked by other states as we retreat further into regionalism and blatant parochialism, shunning a cohesive national identity that has kept India together for over seven decades.

Meanwhile, the one person who is manfully trying to unite India with his brave, if futile, “Bharat Jodo Yatra” across the nation is being dismissed as a loser. From holding hands with fan boys and fan girls in Nanded on the 63rd day of his Long March, Rahul Baba, 52, looking trim, sporty and appealingly dishevelled, offered prayers at a gurdwara on Gurpurab, before resuming the arduous trek. His mass outreach programme, which began on September 7 from Kanyakumari, has so far covered Tamil Nadu, Kerala, Karnataka, Andhra Pradesh and Telangana, and has now entered Maharashtra. The Maharashtra leg will cover 382 km across five districts, before entering Madhya Pradesh on November 20.

Not so surprisingly, Rahul Gandhi’s marathon has been largely ignored by the desi media. A few “friendly” publications have carried reports, without lauding the man’s efforts. Such is his goofed-up positioning that even as important a movement as the Bharat Jodo Yatra is being treated as either a joke or a stunt.

Agreed, not much will be gained by Rahul or the Congress Party at the end of this strenuous exercise, but even as a symbolic attempt to unite a country with a peaceful walkabout, the yatra is being marginalised and diminished by the all-powerful ruling party and its media partners. Perhaps Rahul should re-strategise and take a cue from the PM. Instead of brandishing mashaals and walking hand in hand with strangers (though that takes one hell of a lot of courage in today’s fractious, violent, divisive times), Rahul Baba should shout: “I have made this India… my father, grandmother and great grandfather have made this India… We have made this India -- all of us together.”

Unfortunately, there will be no takers for the chant. Rahul Gandhi may end up seeking comfort in the poem which Jawaharlal Nehru, his great- grandfather, had loved. Towards his later years, Nehru kept a volume of Robert Frost’s verse at his bedside table. He’d underlined the last four lines of “Stopping by Woods on a snowy evening…”, which ends thus: “…The woods are lonely, dark and deep/But I have promises to keep/And miles to go before I sleep/And miles to go before I sleep…”

In the powerful words of our newly-minted Chief Justice of India, D.Y. Chandrachud, India’s 50th CJI: “When I emphasise individual dignity, I equally emphasise social cohesion.” Our netas across parties need to remember this before they boast about “making” any state or “wiping out” critics.