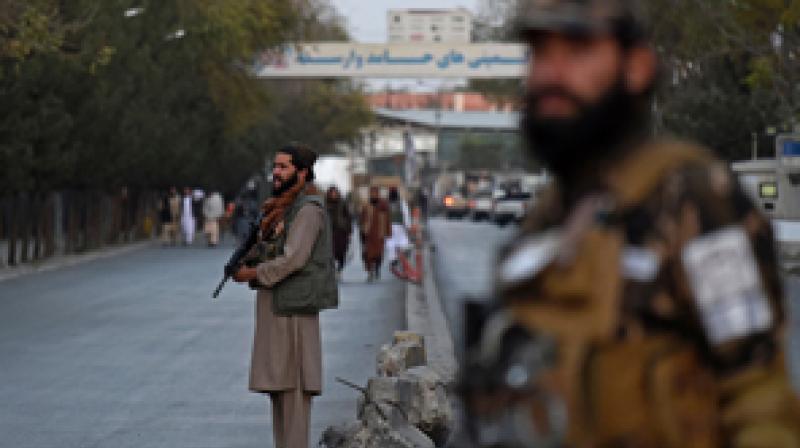 The concerns that are shared and reflected in the Delhi Declaration are: drug trafficking; refuge to terrorist organisations and their leaders; the impending humanitarian crisis due to the onset of winter and the paucity of resources with the Taliban regime. Representational Image. (AFP)

At the third regional meeting of national security advisers or secretaries on Afghanistan, that was held in New Delhi earlier this week, the absence of both Pakistan and China underscored the lack of regional unanimity in dealing with the developments in that country in the aftermath of the capture of power by the Taliban around three months ago. Further differences between the eight participants became apparent when Russia issued a separate statement, despite it having signed onto the joint Delhi Declaration. Russia watered down some of the language on combating terrorism and safeguarding the “human rights” of children, women and the minorities.

While some of the Russian back-pedalling may have been due to their own concerns about international interference in Russia’s internal affairs using human rights arguments, there appeared also a desire not to overly criticise the Taliban. Russia has been engaging the Taliban and is set to attend the Troika-plus meeting in Pakistan, a day after the Delhi meet, at which, unlike in Delhi, Taliban representatives will also be present. Thus, there are several regional initiatives on tackling the geo-strategic and humanitarian ramifications of Afghanistan under the Taliban.

Other than India, Iran and Russia, the meeting was attended by the five Central Asian nations. The eight nations issued a joint Delhi Declaration, with twelve sub paras stressing, recalling, condemning or emphasising the salient issues. The opening point reiterated support for a peaceful, secure and stable Afghanistan.

Furthermore, it seeks respect for the sovereignty, unity and territorial integrity of Afghanistan. However, all eight may have disparate levels of concern on the different aspects. For instance, Tajikistan, which falls in the Persian cultural footprint, unlike the Turkic legacy of some of the other Central Asian republics, has a greater convergence of interests with Iran. As a result, as during the 1990s, the leaders of the Tajik ethnic minority of Afghanistan have sought refuge there. That includes the son of the late Tajik strongman Ahmed Shah Massoud, who was assassinated days before 9/11. This special role of Tajikistan was apparent as on the very eve of the Delhi meeting the United States managed to extricate over a hundred Afghan pilots and technicians who had managed to fly in their planes to Tajikistan as Kabul fell. Similarly, Uzbekistan sheltered the Turkic minorities of Afghanistan, including soldiers of erstwhile Afghan National Army who fled across the Amu river rather than surrender to the Taliban.

The concerns that are shared and reflected in the Delhi Declaration are: drug trafficking; refuge to terrorist organisations and their leaders; the impending humanitarian crisis due to the onset of winter and the paucity of resources with the Taliban regime. Also related to this is the need for the Taliban’s domestic conduct to become more acceptable to the international community. That would require for ethnic minorities to be included in the government to demonstrate more than token devotion to the principle of inclusivity. Also, the regime must act all across Afghanistan in conformity with established principles of human rights.

China and Pakistan want these criteria to be diluted and to use the humanitarian crisis to force the international community to start dealing with the Taliban straightaway, preferably even recognise the regime. To counter this, the Delhi Declaration desires that humanitarian assistance is allowed to be delivered in an “unimpeded, direct and assured manner”. The Taliban would want all assistance to be canalised through their offices, thus giving them legitimacy within Afghanistan and abroad.

On terrorism too, the position of the regional powers remains nuanced. Pakistan, China and it seems Russia as well do not want to hold the Taliban regime to public accountability on the question of them severing links with terrorist groups. China has concerns about Uyghurs but would rather handle the matter bilaterally or by using Pakistan’s good offices.

India has met the Taliban representatives on the sidelines of regional meetings but has been cold to any direct contacts after the elevation of a representative of the Haqqani clan as interior minister. India made a token gesture by attempting to send grains overland to Afghanistan via Pakistan, which was not allowed by Pakistan. But that was more to make a political point about Pakistan blocking even humanitarian aid. In the past, India has used the maritime-cum-land route via Iran to send similar assistance.

That brings up the question of Iran. India having merrily joined the new “Quad” with Iran, the UAE and the United States, Iran would resent an even closer shift by India into the American corner. That is perhaps one of the factors why Iran did not invite India for its regional meeting on Afghanistan recently. Iran is critical to any Indian strategy to bring pressure on the Pakistan-sponsored Taliban government. The Iranian and Indian interests converge on the need for an inclusive government. Iran has twin interests in Afghanistan — to ensure protection for Shia Hazaras and have the Tajiks accepted as partners in the governance structure, in keeping with their second largest minority status after the Pashtuns. At the moment, the first question is still not certain and the second clearly unavailable. But Iran’s geo-strategic interests, unlike in the 1990s, are primarily focused on two other issues.

One is how to get the nuclear deal resurrected after former President Donald Trump withdrew the United States. Two, how to safeguard its predominant position amongst the Shias to its west. This is what distinguishes its priorities now as compared to those it had when the Taliban first rose in the 1990s. The proclivity of the Narendra Modi government to get drawn into US-sponsored alliances thus clouds the outlook for strategic India-Iran cooperation on Afghanistan.

What then was the gain from the New Delhi meeting? It showed that all neighbours, other than Pakistan and China, share in varying degrees India’s concerns regarding the Pakistan-sponsored Taliban regime running Afghanistan. They are mindful of the humanitarian crisis brewing there but are not in a hurry to ignore their concerns about the Taliban and rush aid. But so far, the Taliban has not yet faced a political challenge domestically. The Tajik resistance was quickly overcome in the Panjshir valley with active Pakistani military support. Tajik leaders who fled to Tajikistan haven’t yet got the kind of international support that Ahmad Shah Massoud had till he was assassinated in September 2001. The NSAs of eight nations resolved to keep in touch and meet again next year. The fact that Russia, in its separate statement, kept the next meeting date unspecific indicates the difficult path that lies ahead.