Opinion   Columnists  11 Feb 2017  Give Indian Navy its due
Opinion, Columnists

Give Indian Navy its due

Indian warships are generally not named after historical figures, but after rivers, mountains, ports, weapons and islands. 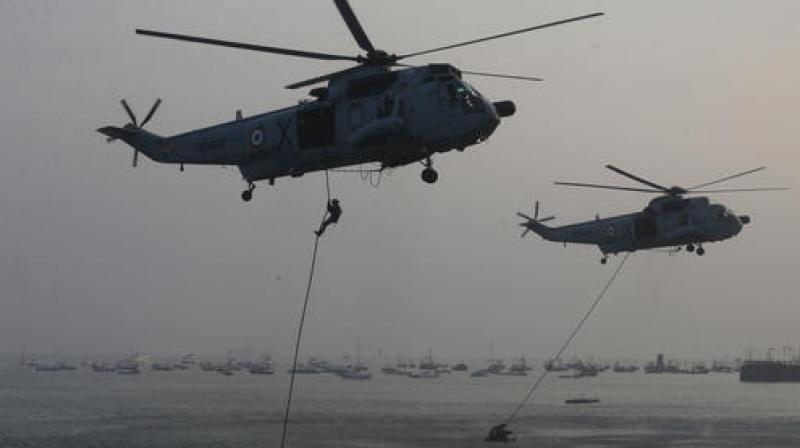 Recently, the media carried news about the Dalhousie Road of New Delhi, being renamed as “Dara Shikoh Road” after Aurangzeb’s elderbrother  who had a reputation for being a liberal, tolerant and secular person, but was brutally killed by his younger brother on being captured after losing the battle for succession. It is believed that history may have been different if Dara Shikoh had become emperor because the ruthless Aurangzeb, had laid foundations for the decline of the great Mughal Empire.

A study of our neighbour Pakistan shows that its Navy at one time had its principal warships named after the great Mughals from Babur to Aurangzeb, with the exception of Akbar the Great because of his liberal views on all religions. Incidentally, Indian warships are generally not named after historical figures, but after rivers, mountains, ports, weapons and islands. However, two Indian Navy shore establishments in Mumbai are named after famous admirals of the medieval period, viz INS Kunjali and INS Angre. Given India’s strategic location, its great dependence on the oceans for trade, energy security and dangers posed by maritime terror, Pakistan and the ever increasing presence of the Chinese Navy in our backyard, the very limited allocation of the new defence budget for naval modernisation, this article suggests that naming any two prominent roads in Delhi as Admiral Kunjali Road (the title given to four Muslim admirals of a Hindu king of Calicut in the 16th century) and Admiral Angre Road (a Maratha admiral of the 18th century), would not only display our secular ethos, but also remind the ruling elite that the sea is vital to our economic growth and national security.

Kunjali Marakkar was the name given to the Muslim naval chief of the Hindu King (Zamorin) of Calicut (present day Kozhikode, Kerala) in the 16th century. As is well known, the Portuguese explorer Vasco da Gama landed in Calicut in 1498 with a powerful  Navy and the next hundred years, commencing 1502 and ending 1600, saw a series of sea battles between the mighty Portuguese and four succeeding Kunjali Marakkars of the Zamorin. The four Kunjali Marakkars were the first to contest a major European naval power to be succeeded in the 18th century by the Maratha Admiral Kanoji Angre. The first four Marakkars were Kutti Ahmed Ali, Kutti Poker Ali (the most famous), Pattu Kunhali and Mohammed Ali.

Unable to get concessions from the Zamorin of Calicut, the Portuguese signed a treaty in 1503 with the Zamorin’s arch rival, the King of Cochin (modern day Kochi). The war between the Portuguese and Zamorin’s Navy continued till 1598, when the Portuguese convinced the Zamorin that his admiral (Kunjali Marakkar IV, i.e., Mohammed Ali) planned to take over his kingdom. The Zamorin joined the Portuguese to defeat and kill his own admiral in 1600 AD. A few years later, the British East India Company arrived and defeated the Portuguese in a sea battle in 1612, ushering in a new colonial power, whose global Navy, ensured it a superpower status, till the Americans took over by about 1950, with the Chinese now also eyeing the number one superpower spot based on the world’s fastest growing Navy, Coast Guard, Merchant Marine, fishing fleet, ocean exploratory ships, all supported by a huge industrial and scientific base.

In 1698, a Maratha named Kanhoji Angre, was appointed Surkhel or Darya-Saranga (admiral) by the chief of Satara, thus giving him authority to protect the coast from Mumbai to Vengurla in present day Maharashtra state. Kanhoji understood that naval warfare is based on offensive tactics, and began to attack merchant ships of the British East India Company, Portuguese ships, and in 1707, attacked and destroyed the British warship in Bombay. On November 4, 1712, Angre’s Navy captured the armed vessel Algerine belonging to the British president of Mumbai and by 1713, the entire Maratha Navy had officially came under his command.

In 1721, Angre defeated a combined British-Portuguese fleet, which attempted to attack Alibag (near Mumbai). By the time of his death on July 4, 1729, Admiral Angre exercised control of the Arabian Sea from Surat to South Konkan.

The 21st century is really the “century of the seas”, and India will find its rightful place in the comity of nations, only after it becomes a major sea power. A small step in this direction would be for India to name two prominent roads in the national capital after two admirals from our history, belonging to two different religions, who briefly gave our “sea blind” rulers, a glimpse of the importance of sea power.