Opinion   Columnists  10 Dec 2019  Is this way to a healthy future? ‘Fake’ meat, made in a lab
Opinion, Columnists

Is this way to a healthy future? ‘Fake’ meat, made in a lab

Going further, we find that producing a pound of beef takes about 1,799 gallons of water which is arguably not exactly very efficient. 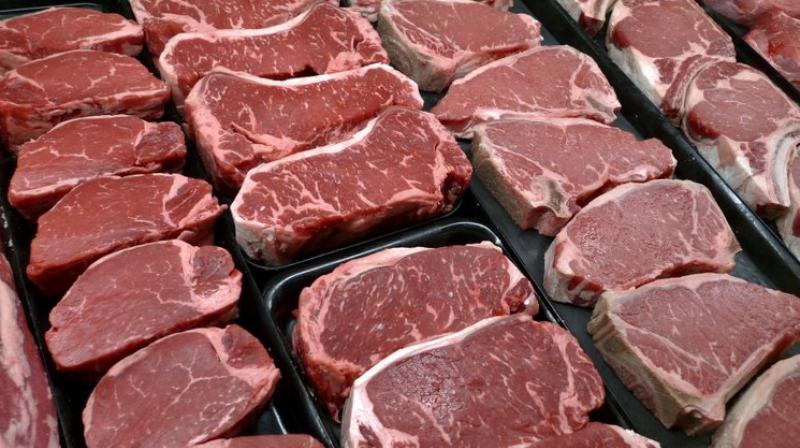 But the march to the future is relentless, and soon we will see meats that are not made from cows or vegetable substitutes but, instead, grown in a lab. (Photo: AP)

Meat is killing the planet, or so we are told. Well not meat per se, but rather the production of meat is increasingly being said to be untenable given dwindling resources and out-of-control climate change and environmental degradation.

There is some truth to this: consider that out of the total arable land available to us, about 30 per cent is used to provide for the cattle and chickens, etc, that we consume. Going further, we find that producing a pound of beef takes about 1,799 gallons of water which is arguably not exactly very efficient.

There are some myths though, and one is that livestock are responsible for rising greenhouse gas emissions, an assertion that is based on a 2006 FAO report that claimed that livestock produced 18 per cent of the world’s greenhouse gas emissions. Though this was later corrected by the author of the report, the figure is still out there adding to all the hot air floating around. Nevertheless, the search for meat substitutes is speeding up. Now if it was just a question of protein, there wouldn’t be that much of an issue as we could all just switch to eating insects which can provide us with the same nutrition as meat with a far lower resource and environmental impact. But since most of the world isn’t quite ready for that, our chitinous friends get a break as we look for meat substitutes that still look and (hopefully) taste like meat.

Enter the “impossible burger” and its fellow faux burgers. These burgers are made of plant-based proteins and, if you look at the way the valuations and profits of the companies making them have risen, seem to be taking the (Western) world by storm. So much so that even major fast food joints are getting into the act, with McDonalds launching its PLT (plant, lettuce, tomato) burger and Burger King following suit with its Impossible Whopper.

But are they actually good for you and good for the environment? Certainly the widespread adoption of these will reduce the environmental impact of the factory farming of meat, and will also help people avoid the risks (cancer and more) associated with the excessive eating of red meat. But there is also criticism to the effect that these burgers are too highly processed, and we already know that processed foods are not good for us. It is also important to note that while this may be a new idea in the West, fake meats have been around for centuries in the East, particularly in China. Way back in the 10th century, monks during the Song dynasty ate a dish called fanghun cai, which literally translates as “imitation meat dish”. Closely linked with the adoption of Buddhism in China, for centuries the art of imitation meat has been perfected leading to vegetarian meals that are indistinguishable from duck, chicken or even shark’s fins.

But the march to the future is relentless, and soon we will see meats that are not made from cows or vegetable substitutes but, instead, grown in a lab. These frankenmeats first debuted in August 2013 when Dr Mark Post from the Maastricht University cooked and ate the world’s first lab-grown burger at a press conference. Now the race is on to bring this product to market, with a Dutch startup called Meatable scoring ten million dollars in funding to produce lab-cultured pork and an Israeli company, Future Meat Technologies, is about to set up its first plant.

If you think that is interesting then check out the American company Air Protein which aims to, you’ve guessed it, make meat out of thin air based on Nasa research in the 1960s.