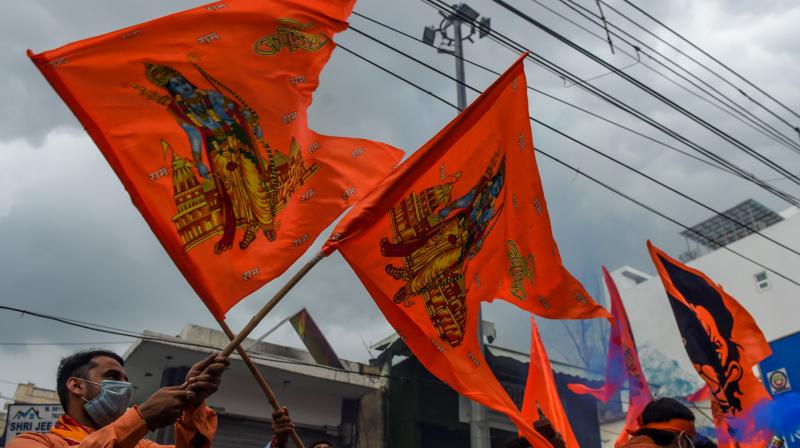 Bharatiya Janata Party (BJP) activists and supporters wave flags as they celebrate before the groundbreaking ceremony of the Ram Temple in Ayodhaya. AFP Photo

But the manner in which India got over the Ram Mandir versus the Babri Masjid dispute must be a unique template for the rest of the world. When the talks failed, the matter was left to the Supreme Court. The judgment, which finally came in November 2019, was a remarkable compromise.

It condemned the demolition of the Babri Masjid on December 6, 1992 and asked for all those responsible for this act to be prosecuted. The Ram Mandir Trust was awarded the disputed land for the building of the new temple.
Simultaneously, the country’s highest court also ordered that five acres of land should be allocated elsewhere for the construction of a mosque.

In a country where some 80 per cent of the population is Hindu, Shri Ram will finally get a temple in his name in his hometown and at his birthplace after a struggle for over a century through a hard fought legal title suit!

There were some commentators in the media who proclaimed that August 5, 2020, the date of the shilanyas of the temple, marked the death of secularism in India. Frankly, I consider all such remarks ludicrous.

Does secularism banish religious faith and worship in India? On the contrary, the Constitution guarantees both as part of our fundamental rights. If so, why should the building of a temple, pursuant to the decision of the highest court of the land, be the harbinger of such unredeemed doom?

The Muslim litigants, who were party to the judicial dispute, may not have been entirely happy about the final verdict, but they accepted it. The same “secular” commentariat has no objection if a mosque or a church is built. In the past, they had always maintained that a solution to the prolonged dispute should be found either through mutual accommodation or through a judicial verdict. Why then this pained hand wringing?

In fact, it is my firm conviction that it is precisely this kind of reflex reaction that does the greatest disservice to the cause of secularism in this country.

Perhaps, the problem with the critics is the pageantry that marked the ceremony. But this was hardly a chance that the BJP-RSS was going to miss.

A temple was becoming a reality after 136 years of struggle. Its consecration had to be done in accordance with Hindu rituals, and the entire ceremony was bound to be telecast live. There was criticism too about Prime Minister Narendra Modi’s participation in the function.

But the precedent of our first President, Rajendra Prasad, inaugurating the restored Somnath temple in Gujarat, in spite of the advice of then Prime Minister Jawaharlal Nehru against it, is telling. Secularism in our country is not about the absolute separation of the State and faith. It is about the fundamental freedom of following one’s faith, while respecting all other faiths.

Babu Rajendra Prasad was one of the most prominent followers of Mahatma Gandhi. He was uncompromisingly secular. But his evocative defence of his decision was simply this: “I believe in my religion and cannot cut myself away from it”.

In other words, just like Gandhiji, he did not see a contradiction between being a practising Hindu and the imperative to respect all religions.

Indeed, if one reads the debates of the Constituent Assembly on the question of secularism, this -- and not the European construct of a complete separation between the State and religion -- was the interpretation accepted by the vast majority of its members.
This being said, what is important for the future is a closure to the kind of communal politics that we have recently seen.

Devotees of Shri Ram would do well to remember that he was “maryada purushottam”, the very epitome of right conduct, the role model of correct behaviour. Shri Ram would never sanction irrational anger, unwarranted violence, or unnecessary vengeance, particularly against the weak or the innocent.

In fact, in Tulsidas’s Ramcharitmanas, there is a very significant line in the description of Ram Rajya: “sab nar karahin paraspar priti” (all human beings would harbour mutual affection for each other).

It is Shri Ram again who — in Tulsidas’ words — tells Bharat: “par hith saras dharam nahin bhai, par peeda sam nahin athamai” (there is no greater virtue than the welfare of others, and no greater sin than injury to others). This did not make him a passive god. He fought hard against injustice and defeated Ravan.

But even in this form, he harboured no personal enmity, and remained the embodiment of the saumya rasa, eternally in equipoise and equilibrium, rational and restrained, and certainly not the kind of person who would approve taking the law into one’s own hands.

Thus, when Prime Minister Modi in his speech at the ceremony said that Ram stands for the unity of India, it must be assumed that what he meant was that Ram, as the embodiment of mercy, compassion, justice and right conduct, must guide our actions in the future.

BJP ideologue Ram Madhav quotes Swami Chinmayananda to say that Ayodhya itself stands for “ayuddha” (non-war or peace), which should augur peace forever among all communities. If the otherwise noble greeting of Jai Shri Ram has been weaponised by illiterate bigots, Prime Minister Modi’s emphasis on Jai Siya Ram in Ayodhya on August 5 is a good sign.

We must remain vigilant to ensure that such sentiments are, indeed, implemented in the future. Hinduism, and its intrinsic tolerance for all faiths, would want that to happen.