DMK’s key test to live up to Karuna’s legacy

There are two prisms through which we must look at the passing of Muthuvel Karunanidhi, the DMK patriarch, which was imminent for quite some time. 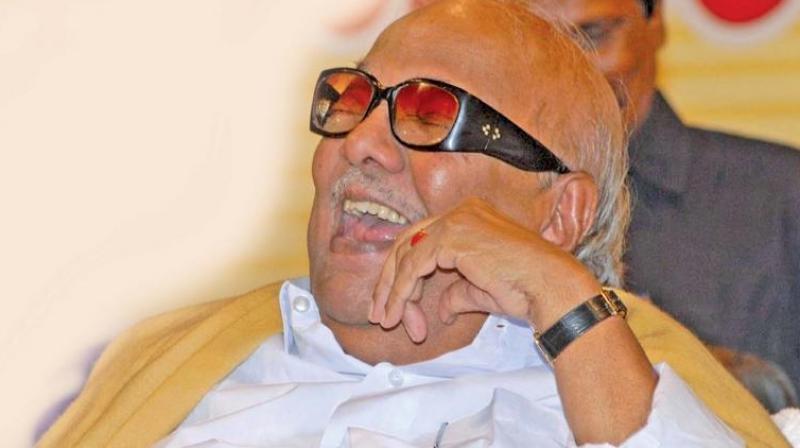 There are two prisms through which we must look at the passing of Muthuvel Karunanidhi, the DMK patriarch, which was imminent for quite some time. But before picking up either, it is worthwhile to note that fortunately the circumstances of his death and health management in his last days have not become a matter of controversy the way it surfaced at the passing of J. Jayalalithaa. The only storm that was raised was over the site of his last resting place, and that too was due to the uncalled-for small-mindedness of a government which remains short of legitimacy almost 21 months after the change of guard in the All India Anna Dravida Munnetra Kazhagam.

Although many would say that it was perhaps poetic justice that the events surrounding the passing of both Karunanidhi, and Jayalalithaa earlier, had melodrama in ample measure. After all, Tamil Nadu is the state where the mainstream film industry, its personalities, its style and extravagant dramatisation, are most enmeshed in politics. That apart, the public response and eventual turn of events underscores the political void in the state and it is for the Central government to step in to ensure that the sentiment of separatism does not raise its head once again among a people who most detest being dictated to by New Delhi.

Karunanidhi’s death should be seen from the perspective of the impact it would have on Tamil Nadu’s politics as well as its impact on national politics. He was undoubtedly the last of the Dravidian political icons but ensured in his lifetime that politics in the state made a transition from being driven by separatist sentiments to becoming emphatic about regional distinctness while staying uncompromisingly nationalistic. This fundamental shift in the primary drive of Tamil politics was brought about within months of C.N. Annadurai’s death in 1969, barely two years after the watershed 1967 election when the Congress, as the representative of all “national” parties, was defeated, never to regain the state.

The DMK in that election was driven by strong anti-Centre sentiment which had escalated in the backdrop of the agitation against the imposition of Hindi. Annadurai’s government, formed in the wake of the DMK’s spectacular victory, took several immediate steps. These included the renaming of Madras state, once opposed by the Congress, and chose a name which marked a separate “country” for the Tamil people. Yet, within months of becoming chief minister, Karunanidhi sought political reconciliation with the Congress and the Centre by becoming an ally of Indira Gandhi, first for the 1969 presidential election when the Prime Minister audaciously and successfully fielded V.V. Giri against the official Congress candidate, Neelam Sanjeeva Reddy.

In less than two years this alliance was cemented with the Congress and the Communist Party of India for the 1971 Lok Sabha polls. With this move,  Karunanidhi brought the state and its people back as national political players while sending a clear message to the national parties that henceforth they would have to remain the junior partner in the state. Yet, Karunanidhi stayed within regional confines stepping out as a player in national politics only in the late 1980s, when he became a part of the V.P. Singh-led National Front and its government.

In his later years, Karunanidhi began epitomising the paradox of the Indian politician, a person who did not often practise what they preached or believed in. The Dravidian movement, which he was a part of, was founded in strident denunciation of hierarchical and ritualistic religion and embraced atheism with scant concern of offending the cultural sentiments of the dominant population. Yet in recent years, the number of agnostics who thronged venues graced or rallies addressed by “Kalaignar”, even those who filed past his body as it laid to rest at Chennai’s Rajaji Hall or jostled with one another to have a last glimpse at the casket which carried his remains, rose significantly. Personally too, the yellow shawl which became an essential adornment almost overnight was reportedly consequent to an astrological advice.

Despite purported compromise with rationality, Karunanidhi remained firm on his commitment to the Indian republic and federal politics. Barring the period between 1999 and 2003 when he was part of the Atal Behari Vajpayee-led National Democratic Alliance, Karunanidhi ensured that the DMK allied with either the centrist or left-of-centre political forces. The DMK under him did not waver on its commitment to democracy, secularism, social justice and economic egalitarianism. His party’s defeat in the 2001 Assembly elections, fought in alliance with the BJP, reaffirmed his belief that despite the saffron party’s ostensible shift to the centre, the party was still perceived as a Hindi-centric outfit. This was the reason for Karunanidhi to keep the Narendra Modi-led BJP at arm’s length in recent years and this tradition has evidently been passed on to the next generation led by M.K. Stalin.

Since Jayalalithaa’s passing, governance in Tamil Nadu has been overshadowed by rivalry between two faceless AIADMK political leaders with little but contrasting initials (EPS and OPS) as their hallmark. To complete this charade of a political structure, V.K. Sasikala’s omnipresent shadow looms large despite her confinement. Securing credibility has been the current state government’s biggest challenge and the chief minister possibly bid goodbye to his party’s prospects in next year’s Lok Sabha elections with his boorish behaviour over Karunanidhi’s last resting place. Since September 2014, when Jayalalithaa resigned as chief minister following her conviction in the disproportionate assets case, the BJP considered that it had an opening in the state. But its plans have failed miserably as the party, in public perception, is propping up the AIADMK government. The BJP is now considered as not just a party intent on eventually imposing Hindi on Tamil Nadu, but also represents the much-disliked Centre that does not fulfil commitment to cooperative federalism. The BJP remains challenged as previously while the DMK under new leaders strengthens past alliances while staying true to the Kalaignar’s commitment to federalism and nationalism.