Film stars were reportedly considering dying their hair purple as a tribute. 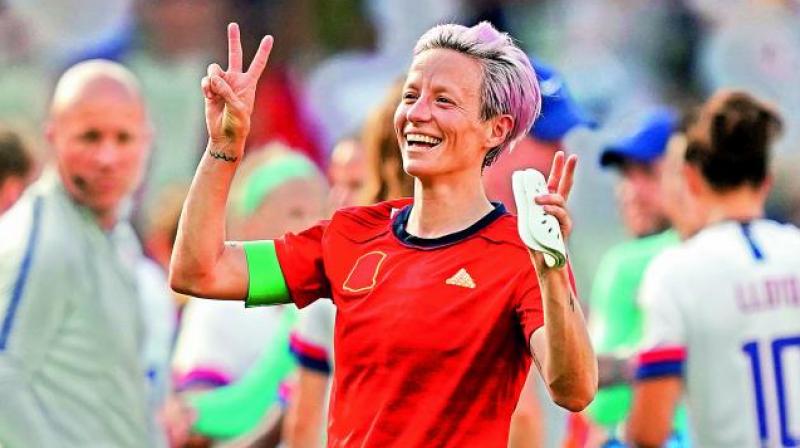 Modern sports are difficult to imagine without their Westphalian baggage, the self-limiting national affinities of players and fans. In more mature societies, respect to the national flag is getting conditioned by the quality of politics it represents. Legendary Muhammad Ali’s views were at variance with the views of those who wanted him to carry the American flag into Vietnam. He refused, and suffered for it, but as a hero. In another era, American athlete Jesse Owens mocked Hitler to his face, though not unaware that his own country was an equal partner in racial bias.

The American women’s football team that beat the Netherlands 2-0 in the finals in France on Sunday reflected a very different star in Megan Rapinoe, she who could openly disagree with the most powerful man in the world, the regressive president of her country. “The chorus of defiant chanting from fans at the sold-out Stade de Lyon confirmed everyone’s suspicions: this was Megan Rapinoe’s World Cup.” That's how the CNN saw it.

Off the field, Rapinoe chided football’s apex body over what she said was their lack of respect for the women's game. She voiced her LGBTQI allegiance with two words: “Go gays!”

Film stars were reportedly considering dying their hair purple as a tribute. On another occasion, Rapinoe rushed to rescue an African-American sportsman, who was targeted for kneeling in protest during the national anthem. She too kneeled in solidarity. That blend of soul-hugging politics and sports exists in patchy ways in different corners of the world. In India, there exists a robust critique of narrow politics among writers and artists, but it is lagging in the realm of sports. I heard Rahul Dravid being quoted recently on the commendable cultural mix that India’s cricket team represents, but it is not clear if there is someone — anyone — among the players who would stand up for course correction should the need arise.

This narrower reality deters hope. I do not see a good reason to agree with the view popular in Pakistan that India deliberately lost a match to keep Pakistan out of the semi-finals. Suffice it to remember, however, that an Iranian wrestler deliberately lost to a Russian competitor because he did not want to face Israel in the next round. The Iranian was banished for six months by the Olympics body.

As for the Pakistani cricketers and their demonstrative religiosity in utterly simple conversations after the matches, they might learn from the Bangladeshis, who are also men of the faith, but can separate religious symbolism from a secular sport. Else, imagine others singing hymns or blowing conch shells before their matches.

Away from the crisis of overarching allegiances and cultural identities, the pilot of a small plane was having his (or her) share of fun flying over the Headingley cricket stadium, poking Indian and Pakistani establishments in the eye in turns. The scrupulously even-handed acrobat (if there was one and not more) was also making an urgent point or two, points of social and political accord with the underdog in both countries.

The first sortie during the Pakistan-Afghanistan match drew attention to a bloody dissent in Balochistan, which Pakistan blames on India. A few hundred feet below the plane, supporters of both teams were locked in an unseemly scrum requiring police action. But the pilot of the plane had not had enough of his message board in the sky. The next sortie over the Birminghan stadium was carried out at a match involving India and Sri Lanka. It flew stencilled trailers condemning the abuse of the rights of Kashmiris.

A third outing highlighted outrage against mob lynching being witnessed in recent years across India. The British hosts were apologetic, and, following India’s fears that the intrusive plane posed a security risk to the players, decided to declare a no-fly zone over the stadiums in Birmingham and Manchester. That is where the two World Cup semi-finals are being played.

There is an inordinately long distance to traverse to catch up with the spirit of Megan Rapinoe and Muhammad Ali, if at all that is possible, to appreciate more genial ways of winning and losing a contest.