Instead of uniting in the face of peril, we have bowed to pseudo religion and its accomplice pseudo-science 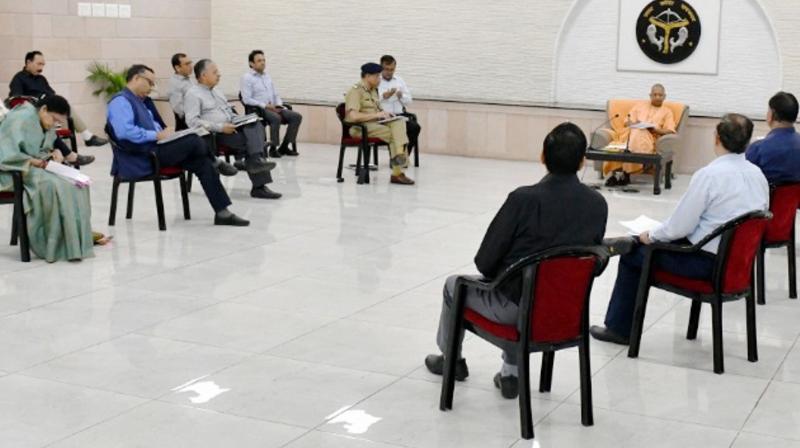 This is Uttar Pradesh chief minister Yogi Adityanath following social distancing while holding a meeting with his staff but before that he was all set to disregard national directives on avoiding mass meetings. (PTI)

Since we Indians seldom fail to brag about our 'uniqueness', which we tend to equate with 'greatness', here are two recent examples of our particular attributes that the world is likely to regard with amusement or curiosity in the context of the coronavirus crisis.

The first concerns religion and its misuse for sparking social animosities, even at an especially difficult moment; and the second relates to the notion of impunity for the politically powerful. Unlike in any other country, matters relating to these have been in the news, and have occupied our consciousness nearly as much as the steps taken to fight the novel coronavirus (Covid-19).

At a time when the world is trying to find exploring the most efficient ways of coping with this calamity, our public concerns too should have been solely about the extremely complex questions relating to this unknown disease, such as the dramatically rising curve of mortality caused by it and the toll it is likely to take on the economic template of nations.

Instead, we have bowed to pseudo religion, its accomplice pseudo-science, superstition, and the show of political power. In this wretched project we have unquestionably been aided by influential sections of the media that relentlessly practise the art of succumbing to authority by not questioning it and by wagging its tail before a bone is thrown.

Since charlatanism appears to be the defining characteristic of much that passes for religious practice in this country, and since these days a large body of politicians appears to be overly keen to advertise its closeness to the ritualistic aspect of religion (religious philosophies are beyond them and cannot help improve their electoral karma), we may begin by citing the example of Yogi Adityanath, chief minister of our largest state, Uttar Pradesh, and arrogant abbott of a Hindu religious order.

In his persona are seamlessly united both ideas that are having a field day in the country -- the prejudicial use of religion and the cocky use of political power. The morning after the prime minister announced a three-week national lockdown on March 24 as the primary response to the Covid-19 challenge, this man had the gall, for no reason other than self-promotion, to move the statue of Lord Ram from one temporary location in Ayodhya to another at the head of a large body of men who were within breathing distance of one another -- in flagrant violation of social distancing norms -- and without wearing face masks.

Junior civil servants have been suspended by the Union government for failing to anticipate the rush of daily income-earners out of the national capital, and crowding the Anand Vihar bus terminus as they sought to head home to rural UP and Bihar, fearing they would die of starvation in Delhi if they stayed on after the lockdown was announced so suddenly and without any prior public discussion.

In keeping with this spirit, it is a fair question to ask: Shouldn't the holy man-CM of UP be set up for questioning under Section 188 IPC for defying a national directive issued from the highest level in a situation that betokens a national emergency?

Not only has this not happened, the state police under the control of this hubris-filled former “history-sheeter” has had the temerity to file an FIR against the Delhi-based founder-editor of a prominent web-based news and current affairs journal which reported the fact of the CM leading the religious ceremony in Ayodhya on March 25 after the national lockdown had come into force.

What would lead India’s fightback against the menace of Covid-19 -- the pointing out of failures and shortcomings in the government’s effort by honest sections of the media, or the whims and fancies of undeserving public servants thrust into high office? The Modi government seems to have given the game away by recently pleading in the Supreme Court that only the officially-authorised version of the anti-Covid-19 campaign be permitted to be used by the media. This is no different from censorship and will be resisted by all democrats.

If it weren’t for the constitutional buccaneer Adityanath’s pronounced disregard of a national instruction issued in a time of crisis, it may be safely said that the Tablighi Jamaat’s callous disregard of science, and of the national and global mood generated by the Covid-19 emergency, demands condemnation.

But it must be stressed that TJ’s international congregation in New Delhi in mid-March, which is officially thought to be responsible for nearly one-third of all corona-positive cases in India, must not be exploited to feed Islamophobia and engender a communal crisis, as is being done by the organised religious right and its media accomplices who have busily touted the expression “bio-jihad”.

That is no way to fight the Covid-19 challenge all across the country. It may be time for the central government to sound a caution. It is useful to know in this context that in a primarily Muslim country like Pakistan too, the religious rabble is filling the media with absurdities. Surely, the goal there cannot be to overwhelm “Hindu rule”. And in this country, the fanatics on the so-called Hindu side have held parties where “gau-mutra” or cow’s urine was drunk as an antidote (since the cow is sacred to most Hindus) to the novel coronavirus.

If TJ and its asinine counterparts among other religious groups are a collection of bumpkins, whose actions can indeed have dangerous consequences, what do we say of Rashtrapati Bhavan? On March 18, when the nation was already in the grip of anxiety relating to Covid-19 although the lockdown was still a few days away, president Ram Nath Kovind invited MPs from Rajasthan and Uttar Pradesh for breakfast (more than a hundred hungry souls), and there are no photos of masked men and women at the jamboree. How clever was that?