Sankalp Patra: How real are the BJP’s promises?

We are far from junking top down, paternalistic, big man rule. Regional political leaders are no different in their preferred style of governance. 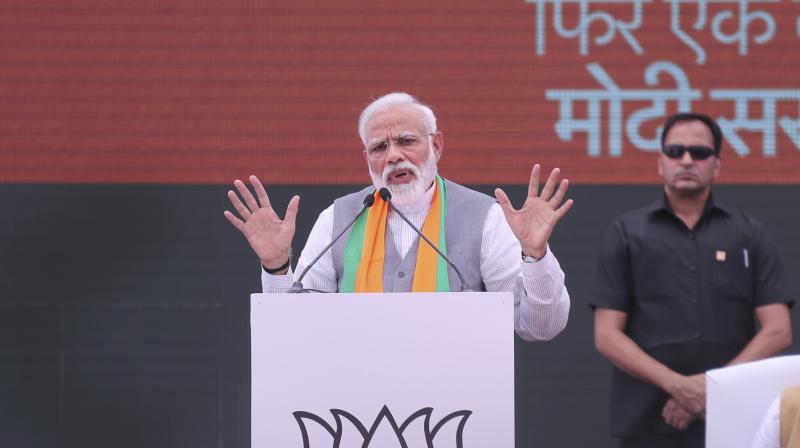 Manifestos don’t count for much if elections are won on the popularity of a single leader — Narendra Modi. Oddly, the Congress chose to follow a similar strategy last week, with Rahul Gandhi as its key protagonist, presenting a David versus Goliath choice.

We are far from junking top down, paternalistic, big man rule. Regional political leaders are no different in their preferred style of governance.

The pre-election media blitzkrieg — paid for by government funds of course, the advantage of a ruling government — was all about PM Modi’s achievements. The 2019 manifesto is all about promises for the next five years. But it is far from business as usual. The BJP has matured way beyond the timorous offering it put out in 2014 when it was toeing the middle road between liberalism and right-wing politics. Those reservations have disappeared five years down.

Then a uniform civil code came at the end of the document. Threats to the nation, internal and external security similarly figured at the tail end. Then upfront was federalism as symbolised by “Team India”, decentralisation and inclusion. All nice sounding, somewhat fuzzy intentions calculated to evoke a warm, “looking forward” feeling. Today all that is replaced by a heavy Statist vision led by massive public investment.

Most disturbingly, the strength of Team India is to be evoked in abrogating Article 370 of the Constitution, which guarantees autonomy for Jammu and Kashmir, and annulling Article 35A, which allows it to discriminate between residents and others. This appeases Kashmiri pandits who were forcibly evicted in the 1990s by Kashmiri “militants”. In a similar vein, Hindu sentiments are appeased by asymmetrically amending the Citizenship Act to allow “Hindu” refugees settled elsewhere to return to India, whilst not extending this privilege to Muslims or Christians. None of this is pleasant reading for those who believe that the Constitution encourages the State to be blind to religion.

The manifesto opens with a segment on “Nation First”, which is calculated to warm the cockles of the security hawks, the armed forces, the police and arms manufacturers. In a vision, very similar to Donald Trump’s America, the foremost national priority today is to protect the nation from illegal immigration and terror.

The security strategy is entirely military, quite ignoring the real threat to this nation and to all others from creeping global warming and the uncertain future of jobs in a poor, population-heavy economy like India. Robotics and artificial intelligence are making rapid strides. Consider that 0.1 per cent of the global workforce of 3.5 billion today already consists of robots. “Green” economic growth with massive investments in human development and social protection is the way to save jobs, end poverty and “weather-proof” India. Otherwise we will be left defending a wasteland.

Resonating with farm distress and a possible drought around the corner, the next segment of the manifesto is about doubling farmers’ income by 2022. In 2014 agriculture was a low priority. But goodies rather than structural reform dominate the narrative. Income support of Rs 6,000 per year will be extended beyond the small and marginal farmers to all farmers, as will pensions for farmers above 60 years of age and the pernicious practice of deducting crop insurance premiums from farmer bank accounts without their permission is to end. Sadly, in defiance of the tenets of responsible banking, interest-free loans are proposed of up to Rs 1 lakh for all farmers.

Missing is the recognition that dairying livelihoods has become unviable for small farmers, who can no longer sell their milch cattle gone dry or their bulls. Also absent is a replication of the transformative “1992 moment” — liberalising agriculture and removing administered controls on exports, import, trade across state borders and bilateral domestic trade outside the mandi. An autarkic vision is expounded of sheltering agriculture behind import controls and export incentives — a strategy which is being challenged by global sugar exporters in the World Trade Organisation and is wholly out
of sync with making India “part of global value chains”.

Rs 25 trillion — a 150 per cent increase in spending on rural development and agriculture over the next five years is proposed, including for a “pucca” house, physical and digital connectivity for all villages by 2022 and piped drinking water to all rural homes by 2024.

Towards making India a $5 trillion economy by 2025 — a doubling of GDP in real terms — policy objectives of fiscal stability, low inflation and high tax revenues above 12 per cent of GDP are proposed. These objectives clash with the largesse extended to groups of voters and an enhanced capital investment of Rs 100 trillion on infrastructure, over the next five years, versus just around Rs 20 trillion of actual public investment over the previous five.

Public debt levels are already at the ceiling of 60 per cent of GDP, reduction in fiscal deficits (FD) over the first three years have been eroded with FD touching four per cent in FY 2019 on a “full public sector deficit accounting” basis, including delayed expenditure and intra corporate loans between profitable oil and insurance public enterprises to loss makers like Air India and stressed public sector banks. FDI inflows have been robust but India’s external account cannot hope to survive on a pile of foreign debt or foreign investment which is prone to be globally mobile. The Sankalp belies its promise. Voters have got used to the BJP scaling up programmes to previously unheard-of levels and achieving seemingly impossible targets — remember how everyone laughed at a renewable energy target of 175 GW by 2022? Well, we are more than halfway there already.

Good performance invites the curse of heightened expectations unless tempered by realism. The manifesto fails to walk this tightrope. Micro targets are misaligned with macro objectives. Trade-offs — essential in public allocations — are neither discussed nor defined.

A laundry list of promises can only ride on the personal credibility of a single person — Prime Minister Narendra Modi. Voters will vote for the BJP if they believe in Brand Modi or look elsewhere. Possibly this is the bottomline message of the Sankalp Patra.