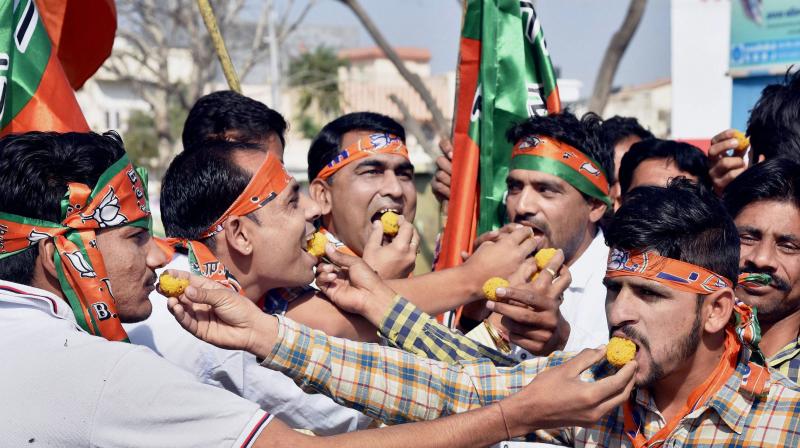 The success of the BJP in UP reflects the crude politics of communalism and casteism of the party. (Representational image/ PTI)

The first of the seven-phase Uttar Pradesh Assembly elections in which voting begins Thursday, February 10, allows the people of the state to express their view through the ballot now that they have heard everyone on all sides, from the Hindutva-driven BJP; the anti-BJP Samajwadi Party, driven by the anger among the people; the Congress, fighting for its place in UP; and the mostly-quiet Bahujan Samaj Party, conscious of its marginalisation. The common promise made by all the parties, big and small, is that they will modernise the state through development. The BJP also harped on its anti-Muslim theme through its so-called unlawful religious conversion law.

Many political observers believe that UP will decide who rules in New Delhi, and this is the unstated credo of the BJP as well. It is for this reason that Prime Minister Narendra Modi abandoned his home state Gujarat eight years ago so that he could become Prime Minister, and it is the reason that Mr Modi’s confidant Amit Shah worked assiduously to craft the 2014 Lok Sabha victory for the BJP in the state. The success of the BJP in UP reflects the crude politics of communalism and casteism of the party. The irony is that a state which is considered a linchpin of national politics remains politically, economically, socially, and therefore culturally, undeveloped, and it drags down India’s bid to get developed and powerful. The backwardness of UP suits many political parties as it then becomes possible to mislead the people. It is also a mystery that the people of UP, who along with those in Bihar are considered politically sophisticated, are unable to force their leaders to develop the state.

The elites of Uttar Pradesh have few stakes in the state because they have already moved to the relatively greener pastures of New Delhi and Mumbai, and they play no role in changing the political discourse in the state. The late Ajit Singh of the Rashtriya Lok Dal used to be irritated that the national media considered UP as a backward state. But even he was forced to play the Jat, and not the development, card during election time. UP remains a politically backward state, and it does not matter which party wins the election. Once elected, the parties and leaders want to modernise and industrialise UP, but they fail. The dialectical muddle in which UP finds itself is this -- it is not possible to become a developed state with an undeveloped political consciousness. The war cries can be the loudest, but the noise is of no avail in the national context. The people and politicians in UP are caught in a vicious circle of their own making. The people are not willing to grow beyond their social divisions and the politicians are only too eager to pamper those divisions.

If Jats want to vote for the BJP because they recall that Muslims ruled over them 300 years ago, and if dalits want to go with the BJP because of their constant battle with the Yadavs, and if the Brahmins want to join hands with the winning side, and Muslims feel helpless that there is no party that can protect them from the anti-Muslim BJP, it only points to the politics of despair. So, the claim that UP’s Chanakyan politics is a delight to the intelligent mind sounds hollow and immoral.

The vulgar political calculus in the UP election this time is not too hard to fathom. The BJP feels threatened by the SP-RLD alliance in western UP, and Mr Shah has tried hard to drive a wedge between RLD’s Jayant Choudhury and SP’s Akhilesh Yadav, and behind the scenes, the BJP leaders have tried to convince the Jat community elders that Muslims pose a threat to them. Though continuing to play the anti-Muslim theme, the BJP has not abandoned its groundwork of keeping the non-Yadav backward castes in its fold by accommodating the Apna Dal and Nishad Party. While Akhilesh Yadav will stress on the economic programme of the Samajwadi Party, he cannot overlook the sensitivities of Yadavs. The BJP believes that the only way to defeat the caste formation is through Hindu communalism.

The marginal national party in UP’s politics, the Congress, is moving along its outside track of non-caste, non-communal politics. The party’s general secretary and UP in-charge Priyanka Gandhi Vadra is focusing on women and youth has tried to sidestep the caste and communal factors. In its own time, the Congress tried to keep the castes and communities in a precarious balance, but it broke. Unless the people of UP are fed up with casteism and communalism, the Congress stands no chance in the state.

Paradoxically, the way out of the cesspool of partisan politics is offered by the Congress as it is the Congress’ traditional upper caste leadership in the state that paved the way for the emergence of the OBC, dalit and Hindutva parties.
Despite its sense of political self-importance, UP remains a marginal state in India’s economic development. India has become one of the top economies in the world with its most populous state left out of the reckoning in India’s economic growth. It is indeed the misfortune of the people of Uttar Pradesh that they are missing out on the excitement of technological changes and economic development. The poor of the state migrate to urban centres in other parts of the country, and the educated youth flock to Bengaluru, Chennai, Hyderabad -- as well as Mumbai and New Delhi -- for jobs in the service industry and the private sector in general. And UP gets cooked in its own goose of casteism and communalism.

It is indeed the case that the backward Hindi heartland, stretching from Haryana to Bihar, with their numbers will keep Indian politics in a crude state of boil, while the rest of the country moves ahead. The BJP can hope to remain a dominant player because of its overbearing presence in the large swathe of the cow belt.

The backward states like UP will prove to be the dangerous underbelly of India, an impediment. Of course, the political teaser is whether UP’s communal politics will spread to other parts of India, as it is has in BJP-ruled Karnataka. But communalism is confined to the Mangalore-Udupi belt. Among the southern states, Karnataka is the most backward, notwithstanding the shining example of Bengaluru.

But it is UP that remains the sick man of India.