The major flaw of this government, and it is not that of the finance minister alone, is the refusal to accept that these are difficult times 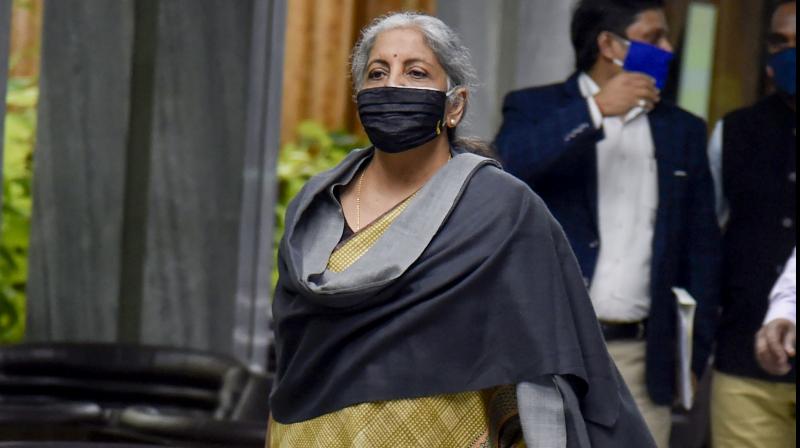 As Union finance minister Nirmala Sitharaman prepares to present her fourth successive Union Budget on February 1, she needs to be applauded for batting on a sticky wicket. It is generally easy to be a finance minister when the going is good. It’s not so easy when the going is tough. She has put up a brave face. The year before Covid-19 – 2019 -- was not such a great year for the Indian economy. The GDP growth rate for 2019-20 was four per cent. The odds have been against her.

The Budgets that she will present this year and the next will be difficult ones because of the political imperatives of the looming 2024 general election. It will be naïve to tell her that she should not let politics mess with her Budget announcements, and that she must focus on how to turn the Indian economy around after two years of Covid-19. In the 2020 Budget, she allocated funds for building roads in Tamil Nadu, which was going into the Assembly election. This did not help the BJP, but that is a different story. Similar budgetary allocations were made for Kerala and West Bengal too. Politics simply cannot be avoided.

The major flaw of this government, and it is not that of the finance minister alone, is the refusal to accept that these are difficult times, and the economy is struggling to get back on its feet. For political and other reasons, Prime Minister Narendra Modi, the head of the government, and his colleagues have got into the habit of saying that the Indian economy is doing well and whatever the problems, they have been solved. The government has been clutching at straws as it were in citing the economy’s figures.

The policy measures that the finance minister doled out under the new rubric of “Atma Nirbhar Bharat” sounded good, but they could not make for any magical revival. What was needed was a critical review of the effect of the measures taken as in the case of the micro, small and medium enterprises (MSMEs).

In the pre-Budget review meeting that the finance minister held with the public sector banks (PSBs), she was told that the PSBs had registered a net profit of Rs 31,820 crores, the highest in five years, and Rs 31,145

crores in the first half of 2021-22! It has also been said that from the extended loan limit of Rs 4.5 lakh crores for MSMEs, Rs 2.9 lakh crores have been sanctioned under the Emergency Credit Line Guarantee Scheme (ECLGS), 13.5 lakh units have survived, Rs 1.8 lakh crores worth of loans have been saved from slipping into non-performing assets, and that it had saved the livelihoods of six crore families. This is firefighting at best, though it is an essential thing to do. But this is far from being the real recovery story.

When the 2020-21 Quarter 1 figure showed a contraction of 24.4 per cent, we have been told that there was nothing surprising in it because there was no economic activity during the sudden nationwide lockdown that was imposed from March 25, 2020 to May 5. When in Quarter 2, the contraction reduced to 7.5 per cent, they saw a glimmer of hope, and claimed that the damage done in the first quarter had been contained. The third quarter of 2020-21 inched out of the negative territory and moved to 0.5 per cent growth, and there was a further improvement in the fourth quarter to 1.6 per cent. But the GDP growth rate for 2020-21 was minus 7.3 per cent, slightly better than the estimated minus eight per cent. 2021 fared better, with a Quarter 1 growth of 20.1 per cent, and this at a time when the second wave of the Covid-19 pandemic led by the Delta variant was at its peak. The second quarter figure for 2021-22 was 8.4 per cent. There was no attempt to make the necessary connections to establish the reason behind the numbers. It is a well-known fact that a low base of the previous year shows up better numbers in the following year, and there is a need to make a realistic assessment of the actual improvement in the situation. This was a job that either the chief economic adviser or the Reserve Bank of India should have done. But they did not. The RBI, in its eagerness to be supportive of the government in this difficult period, forgot to do its basic job of putting out the real picture.

One of the realistic moves by this government was that of the Rs 76,000 crore semi-conductor manufacturing scheme, where the backend has been worked out for the first time. Information technology minister Ashwini Vaishnaw has reckoned with the need for 77,000 engineers who need to churn out from the Indian Institutes of Technology and the National Institutes of Technology and the 15-year timeframe that is needed to achieve self-efficiency in the manufacture of semi-conductors and display devices. There is an expectation of Rs 1.7 lakh crores in investment and generation of 1.35 lakh jobs. This is the only sector where the government has shown a long-term perspective. The usual response has been to convert India into a global manufacturing hub or a global pharmacy virtually overnight. Rhetoric more than planning has driven the economic vision.

There is no need for pessimism about India’s economic future. It is bound to grow, if not by leaps and bounds, then in fits and starts. Even without the shadow of the Covid-19 pandemic, this government could not have made much headway on the economic front because there has not been any measured thinking. The government not only wanted to do many things at once, but it also wanted to do them at a breakneck speed. As a consequence, much that could have been achieved got scattered. India still has to push itself out of the Covid-19-induced economic trough, and it will take time to climb out of it. There is a real need to look into 2023 and 2024 for things to turn around. But the elections that are on the horizon are going to cause a huge diversion.

Launching schemes will be the order of the day. But that is not the way an economy moves forward.