The Narendra Modi government hopes to secure a favourable judgment before the general election in 2019. 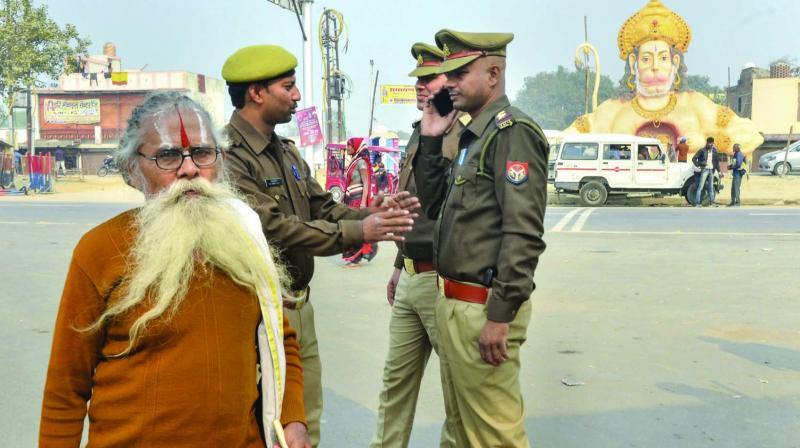 A sadhu walks down a road as police personnel keeps vigil in Ayodhya on Wednesday, the eve of the anniversary of Babri mosque demolition. (Photo: PTI)

An FIR lodged on December 23, 1949, by sub-inspector Ram Dube, police station, Ayodhya, reads thus: “According to Mata Prasad, when I reached... Janam Bhumi around 8 o’clock in the morning. I came to know that a group of 50-60 persons had entered the Babri mosque after breaking the compound gate lock of the mosque or through jumping across the walls... and established therein, an idol of Shri Ram Bhagwan and painted Sita, Ram, etc. on the outer and inner walls... Ram Das, Ram Shakti Das and 50-60 unidentified others entered the mosque surreptitiously and spoiled its sanctity.” Other official reports confirmed this version.

This mosque was built by Mir Baqi, a general of Babar in 1528. Three centuries later, litigation erupted but not the mosque. On January 29, 1885, Mahant Raghubar Das filed a civil suit for “awarding permission to construct a temple over the Chabutra Janam Asthan, situated in Ayodhya”. The chabutra was outside the Babri mosque but within the complex. The mahant made no claim whatever to the mosque. Hindus prayed at the chabutra as the birthplace of Ram. The sub-judge dismissed the suit.

Nothing was heard of the matter. Devout Hindus never raised the matter. Nor did the Hindu Mahasabha. The Rashtriya Swayamsevak Sangh was set up in 1925. At the initiative of its chief M.S. Golwalkar, the Vishwa Hindu Parishad was set up in 1964. Two decades later, the RSS-VHP leaders decided to wrest control of the mosque and build on its ruins a Ram temple.

The mosque was demolished on December 6, 1992. Rajiv Gandhi had secured the opening of the locks at the gates of the mosque in 1986. BJP leader L.K. Advani saw a chance for the party to recover and himself to become Prime Minister. The BJP formally entered into the fray with a resolution in June 1989, on the eve of the general elections, flatly rejected the judicial process, and demanded that the mosque be handed over to the Hindus. A court of law can decide issues of title; not of faith, it said. “The sentiment of the people must be respected.”

This was a reference to the old civil suits filed by both sides since. So demoralised were the Muslims that they filed their suit just as the period of limitation was about to end. There is in criminal law a summary remedy against forcible ouster. The court simply orders restitution leaving the civil courts to decide on title. Even in these proceedings the court made prepared instead perpetrating the ouster.

After the demolition, the Supreme Court split along religious lines. All five judges rejected the President’s reference for an advisory opinion because it ignored the issue of title and sought an opinion on whether a temple existed on the site on which the mosque was built. The majority upheld the act to acquire the site of the demolished mosque and appointed the Central government as its receiver.

Finally, on September 30, 2010, the Allahabad high court ordered a tri-partition of the mosque leaving the idol in place; one portion to a Hindu party and the left over to Muslims. This order was made by Justice Sudhir Agarwal. Justice S.U. Khan agreed — reluctantly for he cited Darwin’s theory of the survival of the fittest. The third judge rejected the Muslims’ case in toto. Had Justice Khan stuck to his reasoning, which differed from that of the other two judges, there would have been no operable order. All three agreed that the idol was placed during the night of December 22 and December 23, 1949.

After the demolition, criminal proceedings were instituted against L.K. Advani and other senior BJP leaders. On August 27, 1994, the sub-divisional magistrate found that the chargesheet did disclose a prima facie case of conspiracy to demolish the mosque. On September 9, 1997, the additional sessions judge confirmed this finding and framed charges against Advani and others. The trial has gone nowhere 25 years after the demolition; though two judicial orders found them prima facie guilty.

The present agitation arose because the Supreme Court adjourned the hearing to January. The VHP, with the government’s tacit support, threatens to build the temple anyhow. The Narendra Modi government hopes to secure a favourable judgment before the general election in 2019. The VHP and RSS are playing a game of pressurising the court. They expect a favourable verdict since the Muslims lost at every stage in the proceedings since 1950.

In the Shahidganj Masjid case in Lahore, there was incontrovertible proof of a 1722 waqf to build a mosque. But it came under the possession of Sikhs after 1762. In the 20th century, the district court, the high court of Lahore and the Privy Council ruled against the Muslims on the ground of adverse possession. The premier of Punjab Sikander Hayat Khan rejected pleas for legislation to overturn the verdict. It was Quaid-i-Azam Mohammad Ali Jinnah who supported him fully.