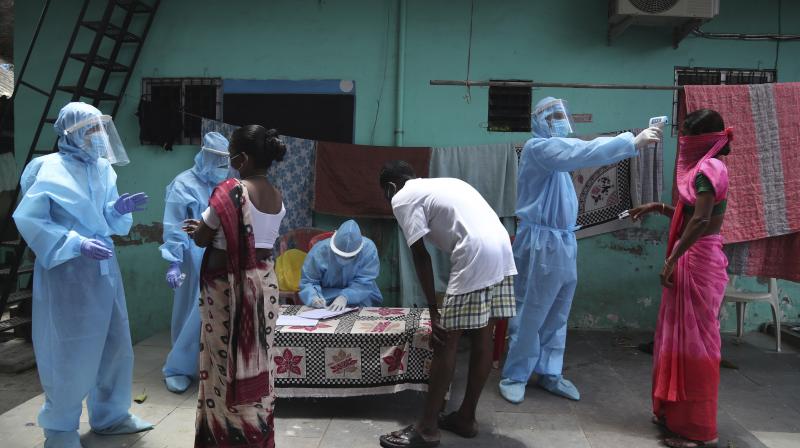 Doctors examines people during a free medical camp in Dharavi, one of Asia's largest slums in Mumbai. PTI Photo

The unremitting onslaught of Covid-19 over the past 75 days has exposed glaring deficits in India’s strategic thought, tactical decision-making and governance processes. If India has serious “great power” aspirations it needs to take a hard look at its institutional capacity rather than deluding itself any further.

Wuhan was hit by a strange pneumonia in mid-November. By mid-December it should have been fairly clear to our Intelligence organisations that something abnormal was going on in China. By the last week of January domestic flights from Hubei province to other parts of China was stopped and controls on traffic movement in major cities like Beijing and Shanghai were initiated.

Diabolically, China kept international travel from China to the world open till middle March. Why was all this not picked up by our sleuths and the Indian Embassy in Beijing and the government forewarned? Is it the case that the government indeed was alerted but they chose to ignore the warnings? What explains the gap between India’s first reported case and that too a returning student from Wuhan on January 30, 2020, and the knee-jerk lockdown on March 22, 51 days later?

The health minister informed Parliament that they have been in conversations with the World Health Organisation about Covid-19 since January 7-8, 2020. If that was the case it begs an obvious question — what preparatory work was done in those 72 days before the lockdown? There does not seem to be any evidence of any urgency in the health ministry’s efforts given that things had started deteriorating across the world. What augmentation of the health infrastructure took place in those 72 days except a rudimentary ramp up of woefully inadequate testing capacity?

After the lockdown was announced it is indeed intriguing why the health minister Harshvardhan — an able and articulate person — was not briefing the nation. Does the nation not want to hear something substantive and sensible from its political leadership in a moment of crisis going beyond the “Taali Bajao Thaali Pito and Diya Jalao” hyperbole that the Prime Minister dished out.

How come the health ministry allowed its platform to be used to put out bizarre hypotheses that if there would be no lockdown Covid-19 cases would have gone from 381 on March 22 to 8.6 lakhs by April 14 — the end of lockdown one? This absurdity was called out by my colleague, Salman Soz, who pointed out that it would have required a daily compounded rate of growth of 40 per cent to reach that figure. The highest was Russia then at 19 per cent. India’s growth rate was 7.2 per cent then and is now 4.67 per cent despite an explosion in actual number of cases.

Then the health ministry did not debunk the report that new cases in India would fall to zero on May 16 or for that matter another set of statistical projections that put the number of averted deaths between 37,000-78,000 because of the lockdown. The source of all this analysis was an “eminence” ensconced in the Niti Aayog. However, the health ministry, by allowing itself to be associated with this mumbo-jumbo, even by implication has hurt its credibility in a moment of national crisis when the trust levels need to be beyond gold standard.

Chanakya in Chapter 6 of the Arthashastra states that the king should keep company of knowledgeable and wise people, selected on their basis of knowledge, age and experience. With help of these sage advisors, the king must develop his own intellect and abilities.

Machiavelli, in his treatise The Prince, wrote a ruler must choose able advisors and allow those men the freedom to speak the truth to him, “Rulers should question their advisors thoroughly and rigorously and listen to their opinions. An able prince will encourage his ministers to speak freely in his presence. However, when it comes to making a decision, a prince should make up his own mind, by himself.”

Rulers throughout the long march of history are known to have harebrained ideas but sagacious are those who permit sage counsel to restrain, temper or modulate these flights of fancy. Every modern nation state has a permanent bureaucracy that has centuries of accumulated institutional wisdom.

It is just unfathomable that no one had the guts to tell the Prime Minister that a lockdown of this scale and nature is just not practical in a country like India and that too with no advance planning at all.

No wonder the lockdown collapsed within four days on March 27 and 28 when millions of migrant workers just poured out of our megapolises and cities triggering an exodus — a manmade catastrophe reminiscent of the Partition of India in 1947. Once the lockdown had started haemorrhaging without any possibility of cauterization, the sensible course of action would have been to transport the migrants home rather than subjecting them to unspeakable horrors. It does not require rocket science to figure this out.

Then why did it not happen? For it seems everyone is petrified in speaking truth to power and the poor do not matter in this government’s scheme of things.

The one thing that manifested itself across the board save a few honourable exceptions is that the rich in India are cruel, callous, self-centered, shallow and abominable human beings. The manner in which within days of the lockdown they sacked their workers and as a consequence incentivised slumlords to evict them and then left them to the mercy of a blasé state and the vagaries of nature should collectively shame people.

No country that has great power pretensions can be so intellectually, infrastructurally and morally bankrupt. We need to fix this.