Aakar Patel | China’s long-term game: What does it really want?

From May, China has physically stopped Indian patrols from proceeding beyond Finger 4, effectively giving China full control over the area 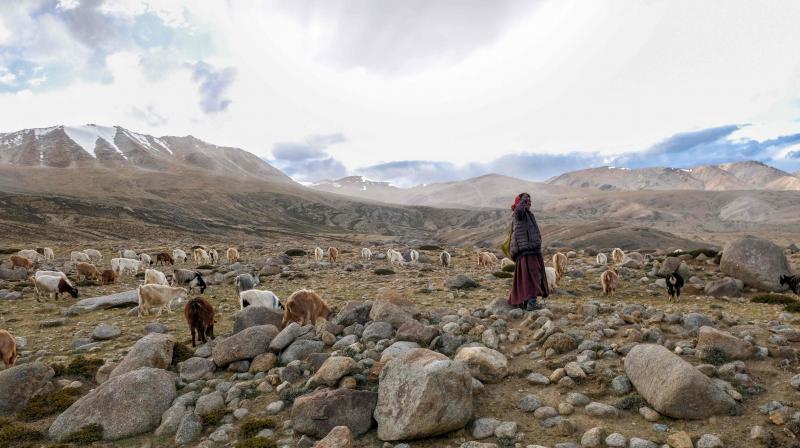 In this file photo taken on August 29, 2019 a Changpa nomad shepherd puts pashmina goats out to pasture near Korzok village in the Leh district of Ladakh. AP Photo

A meeting between India and China took place on Saturday about the problem on the Ladakh border. It didn’t produce the breakthrough that we wanted, and the status quo will continue.

Further talks will be needed and till then the situation on the ground will remain unchanged for an unknown period, while negotiations happen. This is to the advantage of China as its aggressive policy in that area produced the change in status quo.

The meeting was advertised initially in the media as one between two lieutenant-generals. These are three-star generals, one rank below the highest rank of four stars. But what actually happened is that a three-star Indian general went over and had discussions with a two-star general, which took some observers by surprise.

Meetings of this nature should be between equals. A previous meeting of major-generals, who are two-star officers, failed to produce the result India wants.

What does India want? There was a zone in Ladakh which both sides were patrolling till May. They would send groups of soldiers from one area, called Finger 4, that was near the Indian base, to another area called Finger 8, near the Chinese base.

The road from the Indian side to Finger 4 is difficult and can only be travelled on foot and in single file up a mountainside.

The Chinese access is far easier, and they have built roads for their vehicles. Despite the difficulty, India has been regularly reaching Finger 4 and patrolling up to Finger 8 because it is our land and many thousands of Indians had died in the 1962 war defending this land.

From May, China has physically stopped Indian patrols from proceeding beyond Finger 4, effectively giving China full control over the entire area. Reports say the Chinese have moved between 5,000 to 10,000 troops to three places, which are no longer accessible to India. This is the problem, and this is why we are talking today. What India wants and has failed to get in the previous talks is for the Chinese to go away from our land.

The day before the June 6 talks, an external affairs ministry official talked to a Chinese counterpart, and put out a statement saying the issue will be resolved through “peaceful discussion”. Meaning Prime Minister Narendra Modi has ruled out fighting to take back our land and believes we can get it back through talks.

Presumably, the talks that are yet to come will not consist of India’s generals pleading with Chinese generals. Armies exist because the capacity for violence is required for a state to compel another state to stop doing what it’s doing. India appears to have surrendered that option when it comes to the Ladakh intrusion and capture. Is that wise? That depends. What does the opponent want?

Here is the problem. We know what India wants, but there seems to be no agreement on what China really wants and why it is doing this mischief in Ladakh. The experts, mostly former soldiers who are now analysts for the media, have a few theories.

One is that the scrapping of Article 370 was accompanied by the formation of the Union territory of Ladakh, the issuance of new maps and the claim made in Parliament by the home minister that Pakistan-occupied Kashmir and Aksai Chin (which is with China) will be taken back, even at the cost of lives. This had upset China.

The second theory is that Xi Jinping believes Modi is violating the Wuhan Agreement, which the two had signed a couple of years ago. India and China agreed to be friends and partners, and not rivals. But recent actions by India, such as specifically curbing Chinese investments in Indian companies, did not reflect that spirit. India also formed an alliance with the United States, Japan and Australia to conduct naval exercises regularly. China feels threatened by that.

The fifth theory is that it’s a nationalist distraction being spread by Xi as his authoritarian rule has weakened under Covid19, and so he is being adventurous in Hong Kong and against India.
These are some of the theories put forward by the experts. There is no consensus among them on why exactly China is doing what it is. I should stress here these are theories put forward by soldier scholars who admit they are speculating based on the input they have. Some of the people in the media who usually write in favour of the government have said that there is no intrusion at all, and no problem in Ladakh.

In short, China knows what we want, but we don’t know what they want. This isn’t a good starting point for any negotiation. India is a democracy and therefore in some ways it has fewer options. The government faces much more pressure from the media and the Opposition to provide an immediate solution (meaning withdrawal of Chinese troops), and if such a thing happens then victory can be declared.

Modi himself has not taken either the country as a whole or the Opposition parties into confidence on what is happening and what has happened. We haven’t even officially been told what the position is over the land lost between Fingers 4 to 8. The media, which puts other parties under pressure at such times, is giving Modi a lot of rope.

China can play a longer and bigger game strategically. Its leadership faces no media pressure and so it can pursue its long-term objectives by keeping its rivals unstable through such things as this current Ladakh occupation.

What are its long-term strategic objectives and how are they aligned to the current crisis? What does it ultimately want? The experts have no idea. One only hopes Modi and his government does, as they give up the military option.