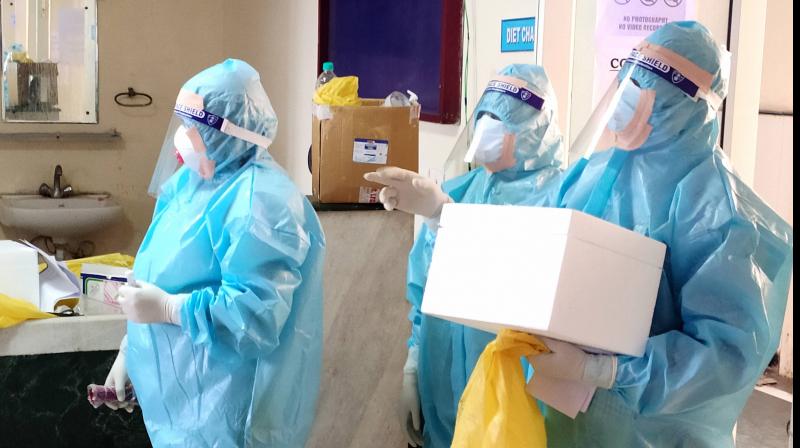 Medics carry testing kit to check COVID-19 patients who have completed mandatory 14-days of quarantine before their discharge at a hospital, during the ongoing nationwide lockdown. PTI Photo

It is ironic that at a time when Prime Minister Narendra Modi is being lauded for his decisive leadership in managing the Covid-19 pandemic, the two chief ministers who have failed to get a grip on the situation in their respective states are from the Bharatiya Janata Party. Both Madhya Pradesh chief minister Shivraj Singh Chouhan and his Gujarat counterpart Vijay Rupani find themselves in the dock for their failure to contain the growing number of infections. While Mr Chouhan can blame it on the fact that he took over as chief minister in the midst of the corona crisis, Mr Rupani has no such excuse. In fact, Mr Rupani was expected to fare better as he heads a state, which acquired nationwide fame for its “development model” put in place by Mr Modi himself when he was chief minister. This has led to wild speculation in Gujarat that Mr Rupani is on his way out and that Union home minister Amit Shah is likely to replace him as Mr Modi wants a strong administrator to put governance back on track in his home state. But it is equally true that Mr Shah has proved himself indispensable in Delhi and Modi will want him by his side during the critical post-lockdown period.

There are reports that a senior lawyer from the Congress camp is about to cross over to the Bharatiya Janata Party. Predictably this has led to a guessing game in the party as it has a number of senior lawyers in its fold. Kapil Sibal, Abhishek Singhvi, Salman Khurshid, Vivek Tankha, K.T.S. Tulsi are names that come immediately to mind. Except for Mr Khurshid, all the others are Rajya Sabha members. It is also well known that in its effort to shore up its numbers in the Upper House, the BJP is constantly on the lookout for “unhappy” Opposition members who can be persuaded to switch sides. The big question then is who among these distinguished gentlemen is being persuaded to join the winning side. Most Congress insiders suspect it may be Mr Singhvi as his family is known to be close to the BJP.

Vice-president M. Venkaiah Naidu has always known to be media-friendly. He was always accessible to journalists each time they sought him out when he was a minister and the BJP president. Today the roles have been reversed. With most persons confined to their homes because of the lockdown imposed by the government, it is the vice-president who is reaching out to media-persons. Mr Naidu has been calling up journalists over the past week to enquire after their well-being and if they needed anything. While sharing details about their daily routine in this informal chat, Mr Naidu said both he and his wife have been busy gardening during this period.

Is the Congress still hoping that Jyotiraditya Scindia will return to the party-fold? The Congress is abuzz with reports that party general secretary Priyanka Gandhi Vadra got in touch with Mr Scindia recently and urged him to come back with the promise that his grievances would be addressed. Mr Scindia is now with the BJP, which promised him a Rajya Sabha seat and a ministerial berth. However, Mr Scindia is still waiting to get his due as the Rajya Sabha election was deferred because of the Covid-19 pandemic. The Congress was hoping that a restless Scindia may be tempted to change his mind. However, that was not to be as he was not interested. Last heard Congress president Sonia Gandhi did not take kindly to her daughter’s initiative.

This is former MP J.K. Jain’s “I told you so” moment. Over two months ago when the coronavirus numbers had just started to climb, Jain had distributed handmade khadi masks to everyone in Parliament House along with a letter urging MPs to utilise their MPLADS funds for tailoring cloth masks in their respective constituencies. He had also suggested that unemployed persons and women’s self-help groups be involved in this exercise, as it would provide employment to them. He had further said that khadi fabric be used for these masks as they can be washed and reused. However, nobody took Mr Jain seriously then while the masks he generously distributed were left lying around. It’s a different story today: every second person and organisation, including the Khadi and Village Industries Commission, is either manufacturing masks or running high profile campaigns urging people to cover their faces. On his part, Mr Jain is busy sending out messages reminding people that he was the first to flag this issue. Unfortunately, no one is willing to give him any credit for his foresight.