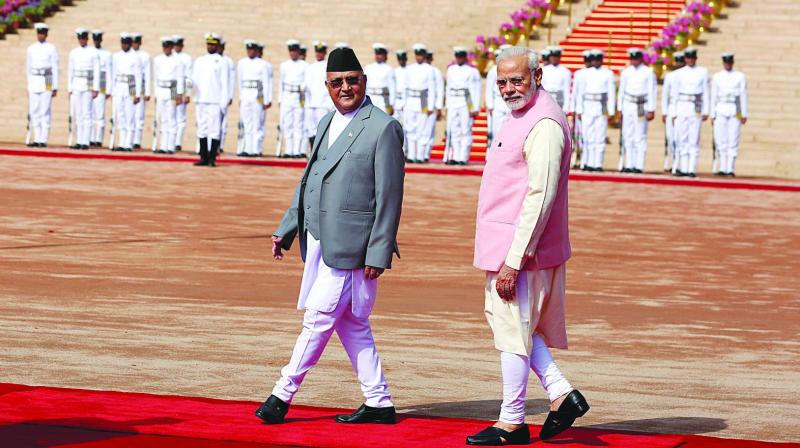 Nepalese Prime Minister K.P. Sharma Oli’s April 6-8 India visit evoked less interest in the electronic media than in the bailing-out of actor Salman Khan in Jodhpur, after being held guilty for blackbuck killing two decades back. This disinterest in the extremely important relations with the only neighbour that has an open border with India is shocking. The joint statement issued after talks acknowledges the “shared historical and cultural links and people to people contacts”. Nepal’s geostrategic significance, however, has increased manifold due to its domestic political developments and the mounting Chinese presence this side of the Himalayas.

Prime Minister Narendra Modi has invested heavily in the relationship by high-profile visits, including addressing the Nepalese Constituent Assembly functioning then as its de facto Parliament. The realignment of political forces preceded the critical 2017 election. The Communist Party (Maoist Centre) led by Pushpa Kamal Dahal, alias Prachanda, abandoned its ally Nepali Congress (NC) to form an alliance, followed by merger, with the more powerful Communist Party (Unified Marxist-Leninist). The two won two-thirds of the seats in the 275-member Parliament, the latter bagging 121 against Prachanda’s 53. The Nepali Congress won 63 seats and the Madhesis, considered pro-India due to their links to India’s Terai region, hold 16-17 seats.

While on a visit to Kathmandu a week ago for a talk, I found newspaper speculation that Mr Oli wanted the seven-clause merger agreement implemented before his India visit to strengthen his diplomatic hand. That has not happened, perhaps due to intra-party rivalries within the CP(UML) among pre-eminent leaders like Madhav Kumar Nepal, J.N. Khanal, etc, who chafe at Mr Oli’s arch-nationalist image, built on countering Indian dominance.

Mr Prachanda’s demand for an equal share in the merged party is resisted by Mr Oli and his associates as they not only fought 60 per cent of the seats but won a significantly higher number. India’s future role as a stabiliser rests on this distrust, as theoretically the old Maoist-NC alliance totals 116 members, and with the Madhesis outnumbers the Oli group.

Thus, despite Mr Oli in his public speeches in Nepal often indulging in targeting Mr Modi and India-baiting, he realises that he cannot offend India beyond a limit. He has balanced the mis-step in hosting the Pakistani Prime Minister immediately after his election win by sticking to the tradition that Nepalese leaders visit India first after assuming power. The vitiation of this atmosphere commenced with the blockade ordered by the Modi government in 2015. Similar steps during Congress governments in the past were partly successful as India dealt with a monarch and an autocratic power structure that could be counted on not to take differences to the street. Also, the Madhesis were not a factor in the kingdom period as political power-sharing was not at stake, only India-Nepal relations were. In 2015, India acted to coerce Nepal to address the Madhesi demand for more representation in the new Parliament and fair redrawing of provincial boundaries which did not marginalise them. In retrospect, this was an unwise move as the hurt has been internalised across the Nepalese population, which the Communists continue to exploit successfully.

Mr Oli’s visit begins the process of containing that harm.

The geo-strategic factor is China’s more assertive role in Nepal. Although it is true that Nepal has for centuries used China to balance pressure from those ruling the Indo-Gangetic plain, it has also done the reverse. Under the Sino-Nepalese Peace Agreement of 1792, Nepal had agreed to pay five-yearly tributes to the Qing Emperor. This stopped after the Tibetans asserted their sovereignty and signed the Thapathali Treaty with Nepal in 1856. Nepal thereafter chose to side with the British and the Tibetans in asserting their authority against China. Thus, the balancing act by Nepal today has a long history.

Three events over the past year raised Indian concerns. China’s defence minister Gen. Chang Wanquan visited Nepal on March 24. Traditionally, it is the Indian Army that has pre-eminence as it not only still recruits Gurkha soldiers, but also India’s Chief of Army Staff gets an equivalent honorary rank in the Nepalese Army. In the following month, the first-ever 10-day Sino-Nepalese military exercise named “Sagarmatha” (Nepalese phrase for Everest) Friendship was held, having a counter-terror focus. Nepal has also been sending a large number of its military officers to Chinese military academies for training. The Nepalese have also been more enthusiastic in apprehending Tibetan refugees, apparently at Chinese behest. Finally, in May 2017, Nepal joined the Chinese Belt and Road Initiative, with connectivity proposals between Nepal and China. In any case, both Mr Prachanda and Mr Oli have in the past sought closer links with China.

Mr Oli came seeking a new way of India-Nepal engagement. India met him halfway to contain any further slippage. Prime Minister Narendra Modi’s domestic slogan “Sabka Saath Sabka Vikas” was extended to the neighbourhood. Mr Oli responded with “Samriddha Nepal Sukhi Nepal”. Samriddha can mean self-sufficient or abundant. Either way, India has to play along. Connectivity and agriculture were the dominant themes. Three standalone joint statements that were issued cover integrated checkpoints, upgraded rail and road links and cooperation in agriculture. The construction of the Motihari-Amlekhgunj petroleum products pipeline was flagged off. Inland water transportation was mooted, but this still needs a lot of study. India presented its counter to the Chinese proposals and an alternative vision of global connectivity for Nepal. The oil products pipeline gives India both a carrot and a pressure point for keeping Nepal on a friendly path. The joint statement articulates that strengthened bilateral relations will benefit “India’s progress and prosperity”. But success depends on Nepal too perceiving benefit in them for its own prosperity. Hopefully, both sides have become somewhat wiser after the 2015 standoff.