The Press Council of India took suo motu cognisance of what happened to Mr Jaiswal, and asked the UP government to submit a report. 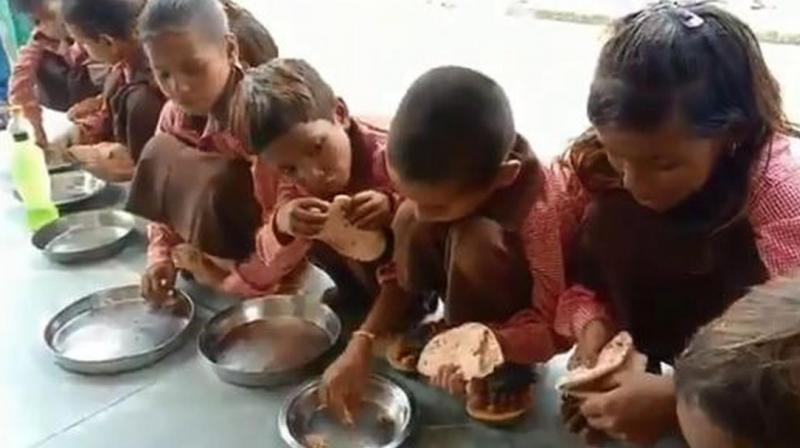 A screengrab from the viral video.

Pawan Jaiswal, the journalist who some days ago shot a video on his phone of children in Siyur Primary School of Jamalpur block in Mirzapur district, eating a midday meal consisting of rotis and salt, is not a good reporter.  According to Mr Anurag Patel, the district magistrate (DM) of the area, he should have taken a photo of this event as “befitting” a print journalist. The fact that he used his phone to shoot a video proves that he was hatching a “criminal conspiracy” against the state. Mr Jaiswal has now been slapped with several cases under the Indian Penal Code (IPC), Section 120B for criminal conspiracy, Section 186 for obstructing a public servant from discharging his duty, Section 193 for false evidence and Section 420 for cheating.

The worthy DM has some high level political support. The deputy chief minister of Uttar Pradesh, Dinesh Sharma, has proclaimed that “if someone tries to defame the government, there will be action”. So now we have a new “normal” for journalistic responsibility: don’t report anything that shows government in a poor light, because even if what you report is true, it is tantamount to defaming the government, and, therefore, the government has the right to use its mighty powers and come down on you like a tonne of bricks for violating several provisions of the Indian Penal Code.

A free media is supposed to be fourth pillar of a democracy. But obviously there are some people in government who would like this to be part of theory. In practice, what they want is a conforming media, a media that has the paraphernalia to carry on its profession, but whose output must never be critical — or “defamatory” — of the government. In other words, the media must understand its “responsibilities”, and never transgress the standards of “correct” reporting as decided by the government. If it does so, it is indulging in a dangerous “criminal conspiracy”, fabricating “false evidence”, and generally behaving in a manner inimical to the well-being of the state.

The hapless Pawan Jaiswal did not realise this new “normal”.  He thought — erroneously it would appear — that it is the duty of a journalist to report truthfully what is happening, and to collect as much evidence as he can to support his point of view. He did not understand that in so doing he is committing the unpardonable crime of going against the interests of the infallible state. A new code of procedure has been promulgated that to take a video in support of your story is tantamount to “criminal conspiracy”.  The messenger must learn to behave, and if he does not, the state has every right to shoot him.

What is happening to our country?  If this kind of action by the government is not a sign of an Orwellian state in the making, I don’t know what else is. The signs of a totalitarian state apparatus, arrogantly righteous, insensitive to criticism, forever ready to be vengeful, is visible. If you interrogate a government point of view, you are anti-national; if you critique the government, you are seditious; if you ask an inconvenient question, howsoever well-intentioned, you are aiding Pakistan; if you do not unreservedly praise every government action, you are not an ideal citizen; if you exercise your right to dissent, you are working against the avowed interests of the state.

The brick and mortar of an absolute state are being put in place right before our eyes. The amendment to the Unlawful Activities Prevention Act (UAPA) allows the government to declare an individual a terrorist, an “urban Naxal” and to proceed against him with the draconian might of the state.  The dilution of the Right to Information Act (RTI) makes information commissioners vulnerable to state pressure, thereby effecting the democratic right of every citizen to get information about how the government functions. A brute majority in the Lok Sabha, and a managed majority in the Rajya Sabha, makes it possible to pass any law without taking into account legitimate criticism or suggestions of the Opposition.

The situation in Kashmir is the new bogey.  We are expected to unquestioningly believe whatever the government says about the restoration of normalcy in that troubled state — or Union Territory now — without demur or dissent. To posit an alternative set of facts as deserving the consideration of the government is not a helpful input, but an act of sedition. The worst part is that large sections of the media — both print and electronic — are colluders in this corrosion of democratic rights. They hound the inconvenient interrogator as though he is a born enemy of the state, as though they alone have a monopoly on what is good for the state. I am reminded of a couplet in this context: Yun dikhata hai aankhen mujhe baaghbaan, jaise gulshan pe kuchh haq hamara nahin: the caretaker looks at us with unconcealed anger, as though we have no claim to this beautiful garden.

I am worried, but remain an optimist. The Press Council of India took suo motu cognisance of what happened to Mr Jaiswal, and asked the UP government to submit a report. The Editors Guild of India issued a statement in support of the journalist and condemned the action against him. The National Human Rights Commission has also issued a notice to the UP government and sought details regarding the status of midday meals across the state.

But while all of this still provides a reason to hope, what is really worrying is the attitude of those in power and their supporters. This is best summed up in the UP deputy CM’s remark: “If someone tries to defame the government there will be action.” It is this attitude which is at the heart of every undemocratic response of the government. It looks at criticism not as an aspect of constructive interaction within a democracy, but as something to be “dealt with”, if possible with punitive action.

Meanwhile, even as we debate larger issues relating to the Republic, Shri Pawan Jaiswal is left to fend for himself.  He has to fight a legal battle against the many serious cases filed against him by the UP government. It will be a pity if he begins to think — amidst the travails he faces — why he took the trouble to report on what children in UP are eating in the name of midday meals.  That is when democracy will really be in danger.